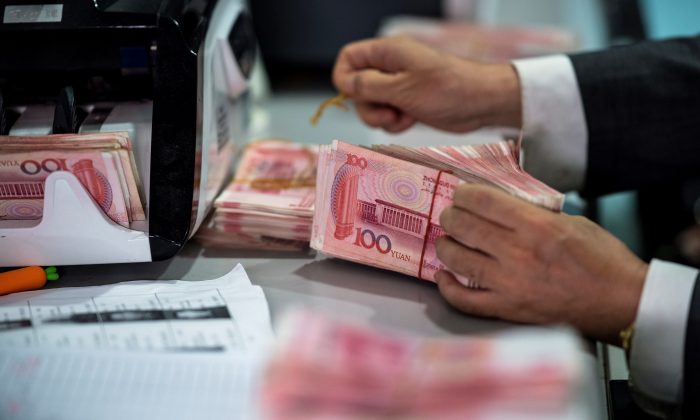 A bank employee counts out 100-yuan notes at a bank in Shanghai on Aug. 8, 2018. (Johannes Eisele/AFP/Getty Images)
China Business & Economy

A crisis of confidence has gripped China’s regional lenders, as Beijing moved to nationalize its third major financial institution since May.

Hengfeng Bank Co., a regional lender based in Shandong Province, received official approval for restructuring by taking a lifeline from an entity affiliated with the Shandong provincial government, as well as Central Huijin Investment Ltd., according to a report by Chinese financial magazine Caixin on Aug. 10.

Central Huijin Investment is a subsidiary of China’s sovereign wealth fund China Investment Corp., and will take a stake of less than 20 percent, the magazine said. Established in 2003, Central Huijin’s mission is to invest in major state-owned financial enterprises on behalf of the state, according to its website.

Hengfeng’s bailout is the third nationalization of a bank since May, and the biggest in size. The first occurred on May 24, when Inner Mongolia-based Baoshang Bank was nationalized and put under the management of China Construction Bank. Baoshang’s bailout was the first of its kind in 20 years.

Only two months later, the Bank of Jinzhou in Liaoning Province was bailed out by a consortium of the Industrial and Commercial Bank of China and two of China’s biggest state distressed-asset managers.

Until recently, nationalization of banks has been rare in China, which underscores rising concerns among regulators regarding indebted smaller lenders, especially as the country’s domestic economy slows.

The People’s Bank of China late last year conducted a risk review of the country’s banks and determined that one in 10 lenders had failed its test.

And regulators are taking no chances in seeking to avoid a domestic financial crisis. The continuing trade war and slackening international economic growth have slowed China’s economic growth and the financial health of its businesses, resulting in a reduced ability to service debts and leading to more small-scale defaults. These souring business loans are especially destructive to the capital buffer at China’s regional and local banks.

Hengfeng Bank had also failed to disclose its financial reports for two consecutive years, including 2018. In the most recent period disclosed, Hengfeng Bank had 1.2 trillion yuan ($170 billion) in total assets at the end of 2016, according to its annual report.

There’s another layer to Hengfeng Bank’s bailout. The bank is no stranger to controversy—two of its top former executives have come under investigation for alleged embezzlement. Jiang Xiyun, who served as chairman of Hengfeng Bank from 2008 to 2013, was charged with embezzling 750 million yuan ($106 million) worth of the bank’s stock.

Cai Guohua, Jiang’s successor at the bank’s helm, fared no better. Cai himself came under investigation later for embezzlement.

In addition, Hengfeng is the second Chinese bank bailout—Baoshang is the other—linked to billionaire Xiao Jianhua’s Tomorrow Group, which holds stakes in hundreds of Chinese banks and financial institutions. Xiao—who was taken into custody in Beijing in 2017—is known to handle financial transactions for Chinese Communist Party elites and their kin. Xiao was wanted by the Xi Jinping regime to assist in its investigation into corruption of high-ranking officials, especially those linked to former CCP regime leader Jiang Zemin, according to an earlier Epoch Times report.

At the end of March, the amount of non-performing loans (NPL) at China’s commercial banks reached 16-year highs. NPLs amounted to 2.16 trillion yuan ($306 billion), or 1.8 percent, according to official statistics released by the China Banking and Insurance Regulatory Commission.

China’s real NPL figures, according to most experts, are likely orders of magnitude higher than the official metrics.

Despite that backdrop, Chinese authorities are pushing banks to ramp up their lending to small and medium-sized businesses to help combat slowing economic growth. In addition, regulators have drafted legislation to reduce loopholes for banks to hide their non-performing loans. One example is to force banks to mark all loans more than 90 days overdue as NPLs, regardless of the underlying collateral quality.

All of this means that banks will be forced to disclose their real health and liquidity issues, accelerating any necessary government bailouts before wide systemic problems emerge.

“Do you know how many banks have connected interbank lending with Hengfeng? The point is that other lenders know there is systemic risk and do not want to lend to them.”