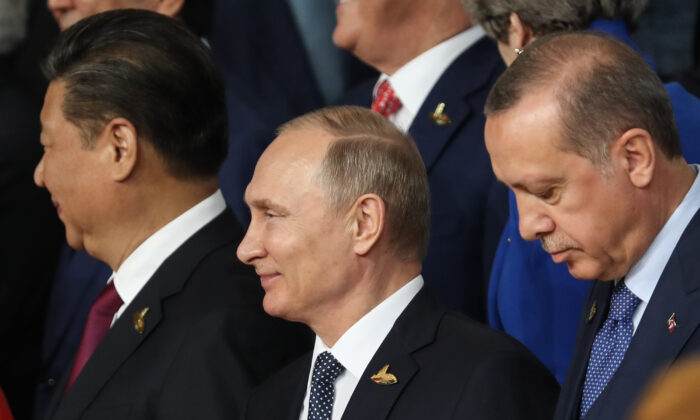 Beijing, Moscow, Ankara Push US Out of Red Sea Dominance

The U.S. abandonment of Ethiopia has forced its government to seek allies and protection elsewhere, and Russia, China, and Turkey have rushed in to fill the power vacuum.

The now-open hostility of the Biden administration toward Ethiopia was rationalized as being supportive of Egypt’s position as the United States’ preferred partner in the region, controlling the Suez Canal. Washington also justifies its hostility on claims—widely discredited by the evidence—of Ethiopian “human rights violations” in its fight against the Tigray People’s Liberation Front (TPLF) Marxist insurgency. But it was the TPLF that began the war surging into the neighboring Ethiopian Amhara and Afar regions, creating millions of refugees.

And despite U.S. efforts to please Cairo, Beijing and Moscow have also improved their positions with the Egyptian government.

As a result, the Ethiopian government, which had seen Washington as its preferred partner, was forced to reopen talks with China—which the government of Prime Minister Abiy Ahmed Ali had essentially rejected upon taking office in 2018—as well as with Russia and Turkey. Turkey had been regarded as a threat to Ethiopia until this point, given that it had been funding Islamist insurgents in Ethiopia in recent years.

To improve its defense position, the Ethiopian National Defense Force has been acquiring significant numbers of unmanned aerial combat vehicles (UCAVs) from China, Turkey, and Iran and large amounts of weapons and ammunition from Russia, Belarus, and the United Arab Emirates. Russia has been moving Sukhoi Su-27S combat aircraft to the Ethiopian Air Force.

The U.S. move to support Egypt’s longstanding rivalry with Ethiopia—a rivalry which hasn’t been reciprocated—was based on fear that a strong and united Ethiopia could dominate the lower Red Sea and jeopardize maritime traffic coming into and from Egypt’s Suez Canal. Egypt has also alleged that Ethiopia, the source of the Blue Nile, was restricting Nile water flow to Egypt. This was proven to be a false claim, too, although Egypt does face an increasing water shortage due to its growing population. Cairo, however, needs a scapegoat.

China and Russia have been able to prove that they have real leverage in the region by resisting U.S. attempts to have the U.N. Security Council authorize military intervention against Ethiopia. The U.S. move was to help the TPLF and the equally violent—and avowedly genocidal—Oromo Liberation Front (OLF) to break up Ethiopia.

In mid-October, Washington escalated plans for economic sanctions against Ethiopia for refusing to allow “U.S. aid” convoys to be routed through the Ethiopian capital to the TPLF. Addis Ababa quickly discovered that the “U.S. aid” convoys were going merely to support the TPLF’s military operations against both the Tigrayan population and other Ethiopians.

Hundreds of “aid convoys” were reaching the TPLF, but the trucks never returned to the capital. They were diverted to be used by the TPLF to aid its mobile warfare, now well-entrenched in the Amara and Afar regions.

Far from being embattled, the TPLF has been engaging in large-scale, formal offensive military operations and creating what’s genuinely a humanitarian crisis, with massive casualties and an estimated 2 million refugees. The World Heritage city of Lalibela, Ethiopia, in the Amhara region, has been occupied for several months by TPLF forces, who were trained and armed by the United States under the Obama administration.

Long-serving U.N. officials in Ethiopia have complained that, with the U.S. pressure, new U.N. officials have been shipped into the country and have been promoting the U.S.–TPLF line against the advice of the more experienced U.N. country team. Ethiopian government forces had, by the second week of October, begun an offensive against the TPLF, utilizing China’s Wing Loong II (CJ-2) MALE (Medium-Altitude, Long-Endurance) UCAVs, which had been shipped in urgently from Chengdu, China, to the Harar Meda Air Base in Ethiopia, not far from the fighting in the Afar and Amhara regions. The CJ-2s can carry 420 kilograms of ordnance, including precision weapons.

It doesn’t appear as though the U.S. escalation of political and economic warfare against Ethiopia will abate as long as the Biden administration’s present State Department team is in place. State Department sources admit privately that they’re using the same playbook against Ethiopia as they used during the Clinton administration against Serbia in the 1990s. But the United States was then strategically far stronger, and China, Russia, and Turkey were far weaker.