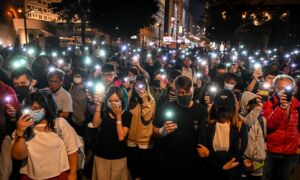 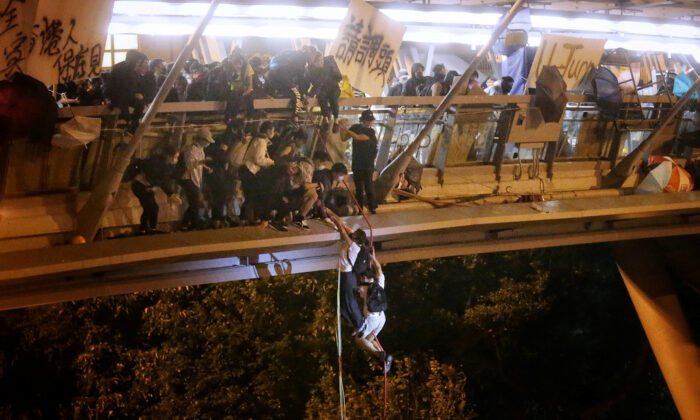 Pro-democracy protesters trapped inside Hong Kong Polytechnic University abseil onto a highway and escape before being forced to surrender during a police siege of the campus in Hong Kong, China on Nov. 18, 2019. (HK01/Handout via Reuters)
HK Current Affairs

Beijing Misjudged Trump and Overestimated Its Infiltration in US Government Before Hammering Hong Kong, Expert Says

Beijing’s blatant arrogance, reflected in the escalation of police violence in the past week, and its furious response to the passing of the bill indicate that Chinese leaders misjudged the situation, according to China expert Qin Peng, who shared his views with Sound of Hope radio, a sister media company of Epoch Times, during a Nov. 19 interview.

“The Chinese Communist Party (CCP) has shown unfettered evil in Hong Kong in the latest round of suppression. Police assaulted universities and brutally beat protesters in public. Numerous murders on the sly have been reported. Needless to say, it is the CCP’s true nature that leads to these outrages,” Qin said.

“However, there is also another important factor. That is, the CCP thought that the international community couldn’t do anything other than condemn its actions, and that it was even possible that both the CCP and the protesters would be criticized in equal measure, which wouldn’t bring any real harm to the CCP. Therefore, it dared to commit all kinds of outrages.”

The CCP thought President Donald Trump would only be concerned about economic benefits for the United States, which is one of the major reasons for their misjudgment, Qin added.

The Fourth Plenary Session of the CCP was held between Oct. 28 and Oct. 31 in Beijing. An insider revealed to the Chinese-language Epoch Times that the main topics discussed at the political meeting were the Hong Kong protest and the U.S.-China trade talks.

“Moreover, the CCP believed they had enough influence inside the U.S. Senate, through years of infiltration, to help postpone the Hong Kong bill or even obstruct the bill from passing. The escalation of police brutality after the CCP’s Fourth Plenary Session tells us that Beijing’s plan was to quell the protest before the U.S. senators discussed the bill.”

Thus, when the U.S. Senate expedited the vote on the Hong Kong rights bill and then passed it unanimously, it was a heavy and unanticipated blow to Beijing, which Chinese leaders were not prepared for, Qin said.

The Hong Kong Human Rights and Democracy Act requires the U.S. Secretary of State to annually assess whether Hong Kong is sufficiently autonomous from Beijing to warrant the special trade status it currently has.

Britain returned Hong Kong to China in 1997 under Beijing’s promise that the city would remain a highly autonomous region with the “one country two systems” framework. The United States has treated it as a separate entity from mainland China in trade, investment, and visa processing. For example, Hong Kong doesn’t face the tariffs that the United States is imposing on Chinese imports.

Chinese officials and Hong Kong leaders deemed responsible for any gross violations of international human rights standards, such as arbitrary detention, torture, or coerced confessions from individuals in Hong Kong, will face sanctions after President Trump signs the bill into law.

Qin applauded the bill, saying that these measures can serve to punish and curb the actions of the perpetrators.

Heng He, a U.S.-based Chinese affairs commentator, expressed similar views when speaking with Sound of Hope.

According to Heng, before the passage of the bill in the U.S. Senate, the CCP took a chance and amped up its handling of protestors, hoping that the international community would continue its appeasement attitude toward Beijing.

“Especially when the White House expressed eagerness to reach a deal in the trade talks, and when the U.S. Senate didn’t seem to have a sense of urgency in discussing the Hong Kong rights bill, the CCP wishfully interpreted these as hopeful signs that it could do whatever it wanted without any consequences,” Heng said.