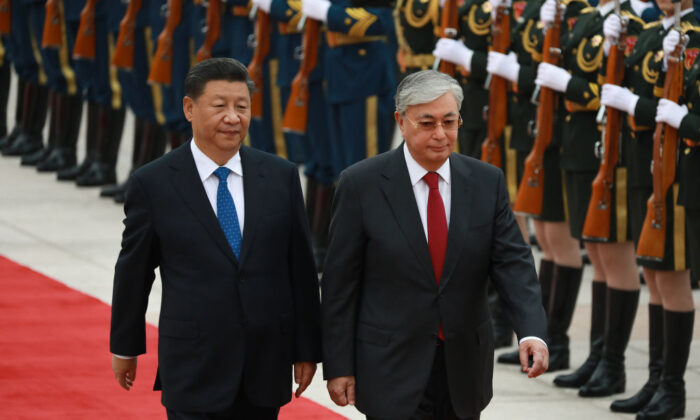 Chinese leader Xi Jinping and Kazakh President Kassym Jomart Tokayev review the Guard of Honour of the People's Liberation Army during the welcoming ceremony at the beginning of the meeting in Beijing on Sept. 11, 2019. (Andrea Verdelli/Getty Images)
Global Expansion

Beijing is taking steps to solidify its sphere of influence, including from close ally Russia, with Chinese leader Xi Jinping delivering a strong message during an official visit to Kazakhstan.

Xi told officials that China was keen to nurture relations with Kazakhstan and opposed any interference in the Central Asian country.

“No matter how the international situation changes, we will continue our strong support to Kazakhstan in protecting its independence, sovereignty, and territorial integrity, as well as firm support to the reforms you are carrying out to ensure stability and development, and strongly oppose to the interference of any forces in the internal affairs of your country,” Xi said, according to a read out from the Kazakh president’s office.

Experts believe that the public warning from the Chinese Communist Party leader is directed at Russia, which has traditionally competed for control over the region.

“Xi’s visit to Kazakhstan can be seen as a sign that Beijing sees Kazakhstan as a friend—and Russia should not do anything to hurt Beijing’s friend,” said professor Mark Katz, an expert in Russian foreign policy at George Mason University, who spoke to the South China Morning Post ahead of Xi’s state visit to Kazakhstan.

Beijing’s warning comes after widespread civil unrest rocked Kazakhstan in January and February and led to rioting in major cities. The unrest has led to 10,000 individuals being arrested and hundreds killed or injured after a government clampdown.

Kazakh authorities reached out to Russia for assistance while claiming that the unrest was sparked by an unknown foreign power.

“The militants have not laid down their arms; they continue to commit crimes or are preparing for them,” President Kassym-Jomart Tokayev said in a televised address. “Whoever does not surrender will be destroyed. I have given the order to law enforcement agencies and the army to shoot to kill without warning.”

“We had to deal with armed and trained bandits, both local and foreign. It is with bandits and terrorists. Therefore, they need to be destroyed. And this will be done shortly,” he said.

Tokayev also said he had ordered a nationwide communications blackout.

According to authorities, Russian-backed forces from the Collective Security Treaty Organisation (CSTO) weren’t participating in any of the Kazakh security operations.

Strategically Vital for Russia and China

Russia and China see Kazakhstan as a critical ally because of its shared land borders, also a potential strategic weak point. The country is also resource-rich and tied economically to Russia and China.

China has invested billions into Kazakhstan via Belt and Road Initiative projects in the fields of technology and finance.

Eytan Goldstein, an East Asia expert, said the Central Asian country was a vital link for China to the Caspian Sea and beyond.

“Thus, China’s eagerness to invest in Kazakhstan and promote its Belt and Road Initiative,” she wrote in Harvard International Review.

Russia is deeply engaged in the Kazakh energy industry with oil and gas pipelines linked to Russia. There are also significant bilateral commitments in the fields of defence and infrastructure development.

Currently, 80 percent of Kazakhstan’s oil exports are moved through the Caspian Pipeline Consortium, where Russia holds a 31 percent stake.

Read More
Kazakhstan Is a Prize Coveted by China

The tug-of-war for power means that several Central Asian leaders have maintained ties with both Russia and China to balance out any risk.

This is the case with Tokayev, who, despite turning to Russia to prop up his rule in January has remained silent on the Ukrainian military conflict and shown no overt support to Russia.

In June, at the St. Petersburg International Forum, he refused to recognize what he termed the “quasi-state entities” in the Donbas region of Ukraine, The Moscow Times reported.

At the same time, the Kazakh government has moved to be more heavily engaged with China in the past few months.

In June, Kazakhstan and China became “eternal comprehensive strategic partners” and agreed to work together in the areas of finance, energy, manufacturing, 5G, artificial intelligence, and green energy.