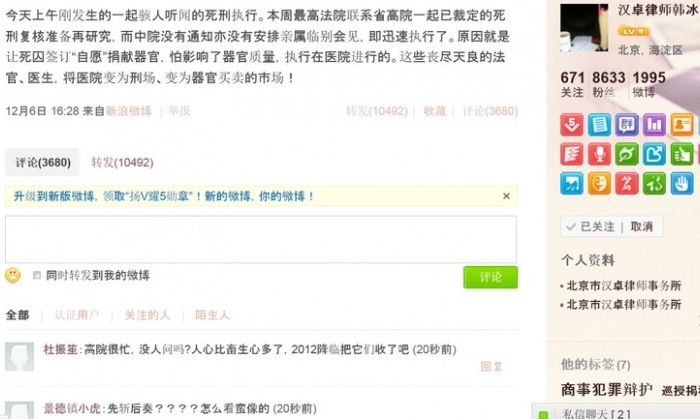 A screenshot of Han Bing's post on Weibo before it was deleted. The lawyer notes that a prisoner was executed ahead of time, so his organs could be harvested. (Weibo.com)
China

A Beijing lawyer has denounced the execution of a death row prisoner at a hospital, saying that it was done for the convenience of simultaneously harvesting the organs.

Lawyer Han Bing from the Beijing H & J Law Firm, who represents the family of the executed man, posted a message on Sina Weibo, China’s Twitter-like microblogging service on Dec. 6.

It said: “This morning witnessed a horrifying practice of execution. The Supreme Court this week contacted the Provincial High Court to re-examine a determined death penalty case. However, the Intermediate People’s Court had the prisoner promptly executed without notifying the relatives for a last farewell visit. The reason for the prompt execution was that the death penalty prisoner had ‘willingly’ signed an organ donation release. To ensure the quality of the organs, the execution was carried out at the hospital. These judges and doctors without conscience turn a hospital into a place of execution and a market for organ trading!”

In response to anticipated queries, Han wrote: “My thanks to netizens and the media for your great concern in this matter. I am in charge of this case, but the situation has come about suddenly and unexpectedly. On behalf of the relatives, we will inquire with the Supreme Court regarding the execution as soon as the funeral arrangements are completed. No further details can be revealed now. Thank you for your understanding!”

digg88, a Shenzhen netizen, who works for the software company Kingdee, said on Weibo, “The rule to buy and sell organs from death row prisoners has been here for many years according to a friend of mine who used to work in the court system.”

Doctors Against Forced Organ Harvesting, a Washington-based nonprofit group, made a recent statement on the Chinese regime’s plan to phase out organ harvesting from executed prisoners. “DAFOH is concerned that the announced changes are primarily aimed at appeasing the international community, while the unethical organ transplant abuses will continue in secret.”

“After years of denying its use of executed prisoners as the source for transplant organs, China has since admitted this unethical practice. However, it has not yet admitted to its use of organs from detained prisoners of conscience. Without disclosing the true extent of the source of organs, there is no reason to assume that the harvesting of organs from Falun Gong practitioners will phase out as well,” the statement read.

Dr. Arthur Caplan, head of the Division of Bioethics at New York University’s Langone Medical Center, initiated a petition on the White House’s “We the People” website on Dec. 2, asking the U.S. government to investigate and condemn the Chinese regime’s practice of killing Falun Gong practitioners and prisoners of conscience for their organs.