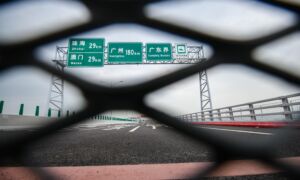 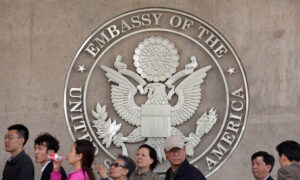 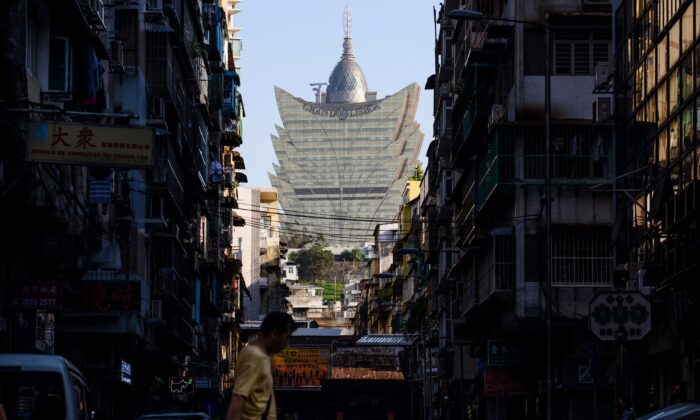 A pedestrian walks in a residential neighborhood in front of a view of the Grand Lisboa casino resort (back C) in Macau, on August 29, 2017. (Anthony Wallace/AFP via Getty Images)
Chinese Regime

While Hong Kong has been roiled by more than half a year of protests against perceived communist influence from the mainland, its neighboring city of Macau has progressed in the opposite direction—serving as a model of obedience to the regime.

Under the “one country, two systems” formula, which also governs Hong Kong, the territory was to be guaranteed a high level of political autonomy not enjoyed in the mainland.

Some 40 miles away, Hong Kong, which the regime similarly reclaimed in the late 1990s, saw another round of protests on Dec. 19 when hundreds marched through downtown to the consulates of eight countries. The pro-democracy movement, initially ignited over the now-withdrawn extradition bill, has broadened into public defiance against the Chinese communist regime—which protesters say has not kept its word to stay out of the city’s affairs.

Xi, who arrived in the city for a three-day visit on Dec. 18, has lavished Macau with praise, calling the city a “source of pride.”

During a welcome banquet on Dec. 19, Xi praised Macau’s government for “prioritizing the interest of the country and Macau” and for its “patriotic education,” including mandating all schools to raise Chinese flags and sing the Chinese anthem.

“The [Macau government] and people from all walks of society is well aware that ‘harmony makes a family prosper,’” Xi said in the same speech. “They consciously resist various foreign interferences.”

Unlike its restive neighbor, Macau, where half of its 620,000 population emigrated from China in recent decades, has been closely following mainland dictates.

Ahead of Xi’s visit, flags and red banners lined the roads as the city went into a security lockdown.

On Dec. 18, Hong Kong pro-democracy activists such as Raphael Wong, Avery Ng, and “Long Hair” Leung Kwok-hung, all from political party League of Social Democrats, were denied entry to Macau. The activists were planning to stage protests during the celebrations.

Macau authorities also turned away reporters from at least seven Hong Kong media outlets, including South China Morning Post, local broadcaster RTHK, Now TV, and Apple Daily, who were assigned to cover the event. The police informed the reporters that there were “strong indications” that the individuals might “engage in activities that endanger public safety or public order.”

The city has long passed a controversial national security law that criminalized activities or preparatory acts related to treason, secession, and subversion. It also banned acts by “foreign political organizations or groups” found to be “endangering national security.” The definition of the term has remained ambiguous.

An attempt to enact a similar anti-subversion law in Hong Kong, called Article 23, failed in 2003 after Hongkongers staged mass protests citing fears that the bill would compromise their civil liberties.

Like the mainland, the Macau government has also been stepping up its surveillance measures, installing security cameras around border entries, main roads, and tourist sites as part of the so-called “Eye in the Sky” system. Since the program was rolled out in 2016, a few hundred cameras have been installed, with the number set to grow to more than 1,600 by the end of 2020. The cameras include facial recognition technology and car license plate tracking capabilities.

On Dec. 16, Fitch Ratings downgraded Macau’s outlook from “stable” to “negative,” in the light of its “rising economic, financial, and socio-political linkages with mainland China.”

No Match for Hong Kong

Xi’s visit has been viewed as a reward for Macau being well-behaved during Hong Kong’s political crisis. Chinese media suggest that Xi could unveil financial incentives as “gifts,” in hopes of elevating Macau’s financial status to compete with the latter as an international trade hub.

Critics, however, have questioned whether such aspirations could bear fruit.

“Macau’s rule of law is falling far short of Hong Kong,” Liu Dawen, the former editor-in-chief for Hong Kong magazine Frontline, told the Chinese language edition of The Epoch Times in a recent interview, adding that “internationally, not many countries consider Macau as having a modern legal system.”

“This is not something [Beijing] can achieve overnight,” he said.

A U.S.-based China commentator known as Haifeng said that Macau lacks a range of conditions, including skilled workers, an established supply chain and infrastructure, and an independent legal system, preventing it from supplanting Hong Kong as an international hub any time soon.

While Hong Kong enjoys special trade privileges with other Western countries that allow the city to be treated as distinct from the mainland, Macau has yet to acquire such international support. Macau also lacks press freedom and a robust legal system necessary to foster investor confidence, Haifeng wrote in a commentary for the Chinese language edition of The Epoch Times.

In contrast to Hong Kong, where the pro-democracy camp scored a landslide victory during the recent district elections, Macau in August saw the election of Ho Iat Seng, Beijing’s handpicked chief executive, voted in by the city’s electoral committee. He was the sole candidate.

“Hongkongers are ‘insubordinate,’ and are bent on pursuing democracy and freedom, but Macanese are obedient like mainlanders and are thus easier for the central authorities to manage,” Haifeng said.

Emmy Hu, Taiwanese financial analyst who had previously worked in the mainland for a decade, shared a similar view.

“From the first day of my job, I have been hearing that Beijing wants to replace Hong Kong with Shanghai as an international financial center, but it hasn’t happened yet,” she told The Epoch Times.