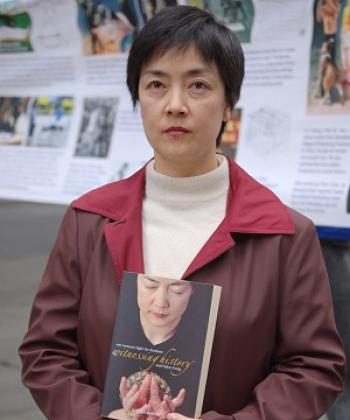 Jennifer Zeng warns journalists that any labor camp tour during the Olympics will be fake. (The Epoch Times)
China

It is quite possible Chinese authorities will allow international journalists into a Beijing forced labour camp as part of their Olympic campaign, says a former inmate, but expect another round of fakes.


Rumours surfaced last week that Chinese authorities may be preparing to allow labour camp tours after reports that many Falun Gong practitioners, illegally arrested for their spiritual beliefs, were being moved out of Beijing forced labor camps and replaced by Chinese Communist Party loyalists or otherwise coerced inmates.

Jennifer Zeng, who gained refugee status in Australia after spending a year detained in the Beijing Municipal Women’s Re-Education-Through-Labour (RTL) Camp, said she was forced to participate in fabrications of prison life for high level officials on many occasions and that it is quite possible there are plans afoot to stage an event for Western media.

“Whenever there were visitors we were made to get up one hour earlier and make everything shine and neat like in a hospital,” she told The Epoch Times.

“As soon as the visitors were gone, we were taken back to our dormitories and back to our work again,” she said.

So-called "reformed" practitioners, people who say they once practiced Falun Gong and now repeat the Communist Party's denunciations of the practice, have also been moved into the Beijing RTL camps, furthering suggestions that there could be an inspection.

In April 2001, a month after the regime invited them, foreign and Chinese media visited Masanjia Labor Camp in Liaoning Province, where “interviews” with Falun Gong practitioners were allowed, an FDI report states.

The labor camp had freshly painted walls and prisoners wore brand-new jumpsuits with their names embroidered on them in Chinese and in English. They were apparently “enjoying” a clean and healthy environment. However, documentation of dozens of prisoners previously held there reveal tales of horrific torture and abuse.

Ms. Zeng said any hope of obtaining the truth of prisoners’ status from the fake inspections is wishful thinking. In her experience, not only was the physical environment dressed up but prisoners themselves would be too afraid to tell the truth.

“Everybody knows you are not supposed to talk to anyone visiting because after they have gone, you will bear all the consequences,” she explained, “that is the reason why they have taken all these Falun Gong practitioners away.

“Only Falun Gong practitioners have the courage to tell the truth so they have to make sure all the "unreformed" ones were taken away.”

She also said that moving reformed Falun Gong practitioners into detention camps to speak to the media would yield little understanding of prison life because people who have been "reformed" through torture have suffered severe handicaps.

“I actually saw many Falun Gong practitioners driven into insanity or madness so I was not surprised to see "reformed" practitioners talk nonsense about Falun Gong.” She continues, “The torture was too much and it has passed their limitations of endurance. I have observed that they have a kind of special mental problem after that.”

The extent of the torture inflicted on Ms. Zeng and a number of other detainees in Chinese labour camps close to Olympic sites is well-documented. The following excerpt is from The Sydney Morning Herald, December 28, 2001.

'I was forced to squat motionlessly and continuously under the scorching sun. The longest period lasted more than 15 hours. I was beaten, dragged along the floor and shocked with two electric batons until I lost consciousness. I was forced to stand motionless with my head bowed, looking at my feet for 16 hours every day, while repeatedly reciting out loud the insulting labor camp regulations. I was watched 24 hours a day by criminal inmates, who were given the power to do anything they liked to me. From February of 2001 I was forced to make 100,000 promotional toy rabbits for Nestle where 130 of us worked up to 22 hours a day to fill the order.'"