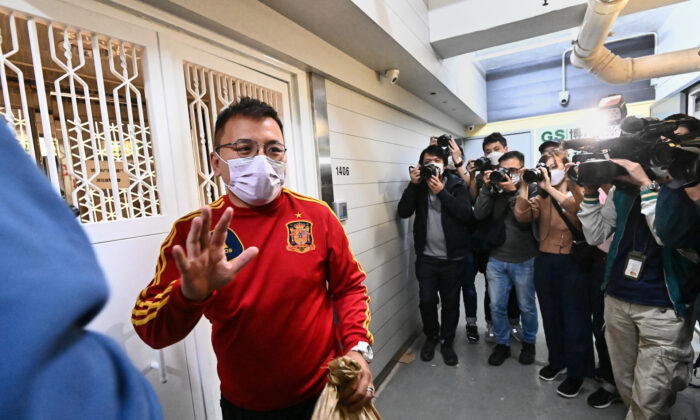 Global sanctions, not just words, are the necessary response

The Fragrant Harbor’s last truly free media are falling one after another under the pressure of the Chinese Communist Party (CCP).

Hong Kong police raided Stand News on Dec. 29. The leveling of the outlet, and the “voluntary” closure of Citizen News on Jan. 3, are two more nails in the coffin of democracy.

Human rights and free speech advocates have roundly denounced the shutdown of Stand News, Citizen News, an earlier sacking of Apple Daily, and the muzzling of RTHK and the South China Morning Post. The latter two outlets increasingly pull their punches, or don’t punch at all, when it comes to the Chinese and Hong Kong regimes.

In the process of attacking Hong Kong’s pro-democracy elements in civil society, Beijing has denuded the city of its most loyal citizens. Hongkongers are getting arrested, or wisely voting with their feet and leaving the city in advance. In most instances they can fight for freedom in Hong Kong more effectively from outside the city.

The Stand News heroes who were arrested most recently include Denise Ho, a pop music star, board member, and Canadian citizen.

Ho’s foreign citizenship and celebrity status indicate that nobody is safe in Hong Kong. Neither are investments. The police confiscated almost $8 million during the Stand News’ closure, their largest haul yet.

Also arrested during the Stand News raid were Patrick Lam, acting editor-in-chief; Chung Pui-kuen, former editor-in-chief; Margaret Ng, a prior board member; Chow Tat-chi, a writer; Christine Fang; and Chan Pui-man, who is married to Chung and the former associate editor of Apple Daily.

Ronson Chan, deputy editor, was taken in for questioning.

The day prior, police charged the billionaire founder of Apple Daily, Jimmy Lai, along with six senior employees, with sedition. Over the past year, approximately 50 independent media organizations in Hong Kong shut down due to CCP pressure.

Stand News’ final statement to the public were its principles, proven by the arrests of these heroes for democracy. “Stand News’s editorial policy was to be independent and committed to safeguarding Hong Kong’s core values of democracy, human rights, freedom, the rule of law and justice.”

The Wall Street Journal editorial board wrote, “The Communist Party can’t tolerate a free press covering its demolition of Hong Kong freedom, so it slanders the city’s journalists as criminals and traitors.”

But these “traitors,” in a totalitarian regime, are the heroes of democracy. One should weep at their fall, in the hope that they might rise again.

Germany had similar sentiments. “From our point of view, the events illustrate anew that there is a steady erosion of pluralism, freedom of opinion and freedom of the press in Hong Kong—especially since this national security law came into force,” a German foreign ministry spokesperson said.

The U.N. Human Rights Office said in a statement to Reuters that it is “alarmed by the continued crackdown on civic space” in Hong Kong, which is “bound by the International Covenant on Civil and Political Rights and has a legal obligation to respect the rights to freedom of information, expression and association, as well as to guarantee due process.”

According to the United Nations itself, the Chinese and Hong Kong regimes, which are really one and the same now, are in violation of international law.

But the two most important points made by commentators were not condemnations, simple statements of support, or observations that Beijing is breaking international law, which most everyone knows and ignores for lack of the necessary military strength for its enforcement.

The two key points are: the need for unified Western actions, rather than just talk, in support of Hong Kong; and the complicity of Hong Kong business elites in the destruction of their own city.

“The crushing of press freedom in Hong Kong joins anti-Uyghur genocide on the list of reasons it was right for President Biden to stage a diplomatic boycott of the Games,” according to The Washington Post editorial board, “and why the struggle for human rights in China will need more such solidarity in the years ahead.”

Hong Kong’s former Legislative Council member Nathan Law spoke to PBS from London in an interview from self-imposed exile. “The West has to step up,” Law said. “What we are lacking is a much more coordinated pushback and also democratic countries using multilateral and different mechanisms to work together.”

Benedict Rogers, a human rights activist and co-founder of Hong Kong Watch, wrote: “It is time that the regime in Beijing and its quisling henchmen in Hong Kong were made to pay the consequences for destroying Hong Kong’s liberties and way of life. The reason incidents such as the attack on Stand News continue to happen is that, so far, the regime has been allowed to perpetrate such violations with impunity.”

According to Rogers, the United States is the only government that has actually gone beyond words to place sanctions on the Chinese regime for its breach of the Sino-British Joint Declaration of 1984, an international treaty registered at the United Nations.

But the United States cannot rectify Beijing alone. If other countries do not follow voluntarily, the United States will be forced to either fold its opposition, or make new sanctions that have extra-territorial effect.

“This is not a regime that respects statements alone, although we must continue to speak out,” wrote Rogers. “But it is a regime that only understands the language of strength and action. So democracies, if we still believe in press freedom and other basic human rights, must unite and coordinate robust, targeted sanctions to make it clear that the assault on Hong Kong is unacceptable.”

All of these points on Hong Kong have lessons for the rest of the world, which must act together against the CCP or risk the permanent destruction of democracy in the United States, Europe, and everywhere else.

If the world empowers Beijing by giving up Hong Kong with barely a fight, then tomorrow we will be even weaker when it comes to defending our own freedoms.