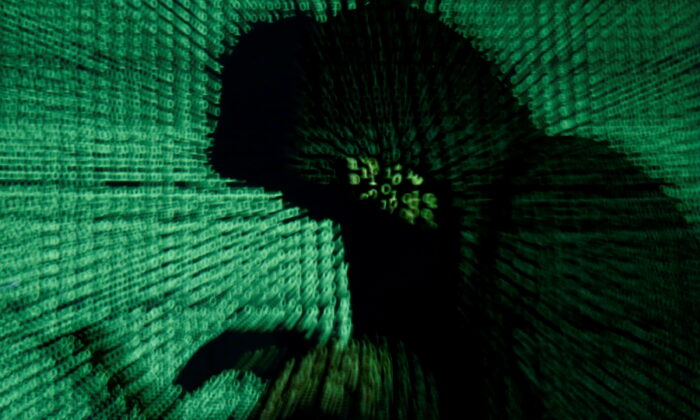 A man holds a laptop computer as cyber code is projected on him in this illustration picture taken on May 13, 2017. (Kacper Pempel/Reuters)
Canada

China Is Number One Source of Cyberespionage Against Canada, Targeting Dissidents, Diasporas: Report

Canada has increasingly been targeted for cyberattacks over the past decade, with China being the number one source of such malign activities, says a recent report.

The report, by the Center on Multimensional Conflicts at the University of Quebec in Montreal (UQAM), also warns of efforts by the Chinese Communist Party (CCP) over the years to “export surveillance” against various groups of overseas dissidents and diasporas in the cyber domain.

“In China itself, the Communist party has developed a state-of-the-art, Orwellian surveillance machine, with the help of China’s Big Tech companies. Meanwhile, the Chinese regime also increasingly deploys an arsenal of espionage outside of its own territory,” the report said.

New cyber capabilities have provided nation-states with countless new avenues of espionage and surveillance everywhere in the world, without much risk of retaliation, the report said. It noted that states are now using such capabilities to collect more than just the traditional state secrets of other countries, but also intellectual property or personal information on foreign high-ranking decision-makers. In addition, there is a more concerning trend.

“In recent years, however, another trend has been of increasing concern: the digital surveillance of civil society actors, human rights activists, or members of oppressed minority groups,” the report said.

“What is more, the global rise of digital authoritarianism now transcends borders and poses significant challenges to democratic countries such as Canada.”

Members of the Falun Gong spiritual practice in Canada is one such group that has been targeted for harassment by Chinese state actors after fleeing their home country where they’ve been the target of the CCP’s political persecution.

“Since 2010, practitioners of Falun Gong living in Canada have also reported various acts of online intimidation and disparagement, allegedly orchestrated by the Chinese state,” the report said.

One tactic cyber actors often employ against Falun Gong is fake emails or letters sent to insult or threaten foreign officials in the name of the persecuted group, the report said, citing another report, from March 2020, titled “Harassment and Intimidation of Individuals in Canada Working on China-Related Human Rights Concerns.”

“The use of fake letters and emails has long been a hallmark of the Chinese Communist Party’s overseas campaign against Falun Gong practitioners, to disparage them and to undermine their reputation. This practice against Falun Gong practitioners has continued since 2017,” said the 2020 report published by Amnesty International Canada in coordination with other members of the Canadian Coalition on Human Rights in China.

“Bizarre, offensive, and sometimes threatening letters and emails have been sent” to Canadian politicians like Liberal MP Judy Sgro in December 2017 and NDP MP Peter Julian in March 2019, the report said, noting that it was “an apparent effort to discredit the Falun Gong and hurt their relationships with recipients.”

This type of “cyber incident”—defined by the UQAM report as “intentional, malicious actions, limited in time and carried out at least in part in cyber space”—was also used against other Chinese overseas dissenters of the CCP, including Tibetans and Uyghurs. The 2020 report said some overseas Hong Kong civil society groups were also targeted.

Exportation of surveillance by authoritarian states is but one of three major types of cyber threat trends to watch out for, according to the UQAM report. The other two trends are the expansion of the cyber-mercenary industry and the massive growth of ransomware attacks.

The UQAM report found that, like many other countries, Canada is increasingly entangled in international cyber rivalry, as it documented at least 75 geopolitical cyber incidents targeting Canada since 2010, including 49 that are categorized as acts of cyber espionage.

It noted that the vast majority of geopolitical cyber incidents recorded in Canada since 2010 can be traced to four countries: China, accounting for 23 out of the 75 incidents, followed by Russia (18), Iran (8), and North Korea (6).

The report, however, said that this data relates to the geographic origin of cyber incidents that have affected Canada and “do not necessarily imply responsibility of the governments of the countries mentioned.”

“Some incidents, for instance, may have been operated by non-state actors located in these countries and acting on their own,” it said.