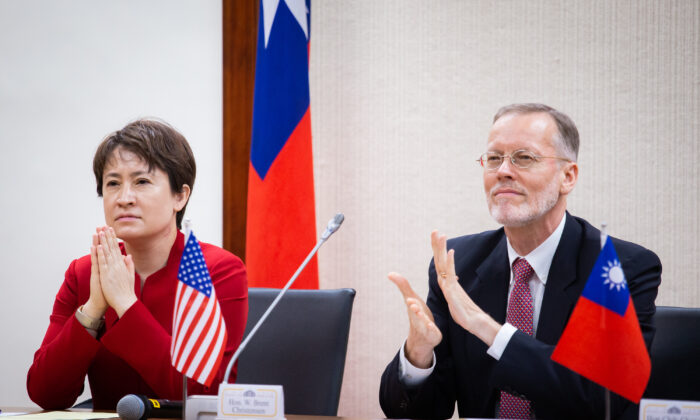 The Chinese foreign ministry had warned that Pelosi’s visit would lead to “serious consequences” and that “those who play with fire will perish by it.”

But Hsiao pointed out that U.S. congressional visits to Taiwan are not a new phenomenon.

“The Beijing government is currently trying to manufacture a crisis over a practice that has been ongoing for decades, and they are using this as a pretext,” Hsiao said.

On Aug. 2, the day Pelosi arrived in Taiwan, China announced live-fire military drills in six zones around Taiwan between Aug. 4 and Aug. 7. The drills were the largest exercises the Chinese regime has ever held in the Taiwan Strait.

After her visit to Taiwan, Pelosi stated that the United States will not allow China to isolate Taiwan.

In the interview with CBS News, Hsiao was asked about China “flexing its diplomatic muscles” due to Pelosi’s visit, including canceling several agreements with the United States.

Hsiao also talked about China’s “intensifying threats” toward Taiwan, not only on a military level but also via a “hybrid tool kit” of cyber attacks, public disinformation, and economic coercion.

Hsiao said she believes the Taiwan Relations Act has provided a strong foundation for the United States to defend Taiwan militarily against the Chinese regime, but she refused to state explicitly whether Taiwan has assurances from the Biden administration that the U.S. military would come to the island’s defense when needed.

President Joe Biden is facing criticism over how his administration is tackling the China–Taiwan issue, with Sen. John Barrasso (R-Wyo.) pointing out that the Chinese communist regime is looking to benefit from America’s perceived weakness.

“China is displaying strength at a time when President Biden has displayed weakness, and they’re going to take full advantage of it,” Barrasso said in an interview for Fox News.

“When China or Putin or anyone sees weakness, they go at it, and that’s what’s happened right here,” he said. “The president needs to show some backbone internationally.”

Meanwhile, Pelosi is facing criticism for not including a single Republican lawmaker during her trip to Taiwan. In addition to Pelosi, there were five members on the delegation, all of them Democratic lawmakers.

One Republican, Rep. Michael McCaul of Texas, was invited, but he couldn’t join the delegation because of a pre-arranged personal engagement.