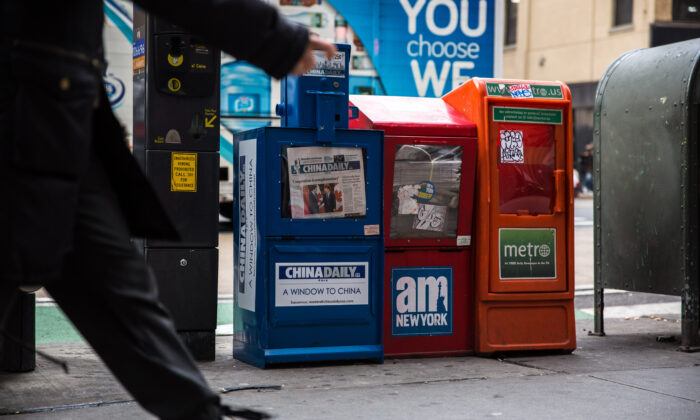 ‘Beijing Is Doubling Down’: Report Warns China’s Media Influence Efforts in US Are ‘Very High’

The Chinese Communist Party (CCP) has intensified efforts to influence the media in the United States as part of a multibillion-dollar global campaign to shape public opinion in its favor, according to a new report.

Freedom House in its “Beijing’s Global Media Influence” report released on Sept. 8 found that the Chinese regime and its proxies were using “more sophisticated, covert, and coercive tactics” to propagate pro-Beijing narratives, spread disinformation, and stamp out unfavorable news.

“Beijing is doubling down on its campaign to control how it is portrayed in the world and to bend foreign media to its will,” Michael J. Abramowitz, president of Freedom House, said in a press release.

“These efforts seek to silence criticism of the regime and convert independent media into shills for the Chinese Communist Party.”

The areas that experienced the most intense Chinese influence were: Taiwan, the United States, and the United Kingdom, with Freedom House labeling Beijing’s manipulation efforts there as “very high.”

In the United States and elsewhere, Chinese state media has paid reputable outlets to publish content portraying the regime in a positive light, the report detailed.

According to Department of Justice filings, China Daily has paid at least $7 million to various publications to carry its inserts from January 2019 to October 2021, the report stated.

In the United States, the Chinese consulate in New York paid social media influencers to promote the 2022 Beijing Winter Olympics and “any good things in U.S.-China relations,” according to a December federal filing.

The public relations push came amid growing international backlash ahead of the Games over Beijing’s repression in the Xinjiang region, which several governments and parliaments have labeled as genocide.

“Many such efforts were linked to the Chinese government’s push to undermine the credibility of documentation showing mass detentions and atrocities against Uyghurs and members of other Muslim minority groups in Xinjiang,” the report stated.

Since 2019, the CCP has drastically ramped up its disinformation campaigns on social media platforms around the world, using networks of fake accounts to spread false narratives, Freedom House found.

Over the years, thousands of fake accounts have been detected on Twitter, Facebook, and YouTube, and taken down for manipulating discussion on an array of topics involving China, according to the report. These include pro-democracy protests in Hong Kong, human rights abuses in Xinjiang, and U.S. relations with Taiwan.

The regime’s attempts to influence media channels in democratic countries have come under rising scrutiny.

U.S. Secretary of State Antony Blinken in May said the United States was “deeply concerned” about the CCP’s efforts to quash press freedoms in mainland China, while simultaneously exploiting free media in other nations to spread pro-Beijing messaging.

“We have a total imbalance, because these leaders in Beijing are using the free and open media that we ensure and are protected in democratic systems to spread propaganda, to spread misinformation,” Blinken said.