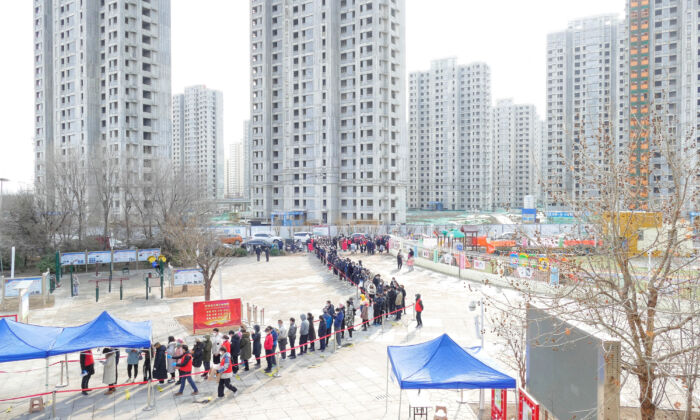 People line up for nucleic acid testing during a citywide mass testing for COVID-19 in Tianjin, China on Jan. 9, 2022. (CNS Photo via Reuters)
INSIDE CHINA

A coronavirus outbreak in Beijing’s neighboring city of Tianjin comes just four weeks before the start of the Winter Olympics in the Chinese capital.

This means all 15 million Tianjin residents are barred from entering Beijing which is 100 kilometers away. Meanwhile, Beijing’s so-called “Closed Loop” or “Bubble” measures for the Winter Olympics are now in full swing. The Olympics begin Feb. 4.

On Jan. 9, the Jinnan District Center for Disease Control and Prevention in Tianjin reported that 20 more people tested positive through COVID-19 PCR testing, a day after 20 others were found to have the virus. Those infected are linked to educational facilities, and the outbreak has spread to at least three schools.

The Tianjin Center for Disease Control and Prevention conducted genetic sequencing of the virus in two of the cases and identified the virus at the new Omicron variant.

On Jan. 9, the Tianjin municipal government decided to carry out nucleic acid testing on all its staff. Other testing measures for the public are likewise taking place.

“The rest will take them tomorrow. Nankai District has notified the closure of the district. People in Jinan District have basically all done nucleic acid yesterday,” he said.

“People were still lining up at 3:00 am. At four o’clock in the morning, the inspectors started going door to door to administer nucleic acid [testing] to elderly people who had not taken it.”

Meanwhile, the Tianjin Municipal Examination Institute announced that all interviews for a teacher qualification examination scheduled for Jan. 9 had been canceled.

“There is a teacher qualification exam these two days,” Zhang said. “I learned online that those who finished the exam on the 8th were required to quarantine, but it was announced at 11.30 p.m. yesterday that the test on the 9th was canceled,” he said.

“A lot of people came to Tianjin [for the exam] and live in a hotel. Now they just can’t go back. They may need to quarantine at their own expense. I saw someone saying online that he had no money, no food, and couldn’t go out.”

Officials at the Yingsi checkpoint on the Beijing-Shanghai Expressway told the state-run Beijing News that they had turned back many people and vehicles entering Beijing over the past two days.

The official request is understood not to be a “travel advisory” but an executive order.

In October 2021, Beijing issued a clear order banning entry into Beijing of the so-called “four categories of people,” including “people in the county with one or more local COVID infection(s) and those with travel history in that county within 14 days”. In other words, as long as there is a confirmed positive case of COVID-19 in a county, everyone from that county is not allowed to enter Beijing, including Beijing residents who stayed there within 14 days.

Zhang said the authorities are not concerned about the treatment of those who are ill from the virus.

“The media and the government have always focused on how many people have been tested positive,” he said. “But how many have been infected, and how many have been isolated, but how are these patients doing? How long does it take to recover? How effective is the treatment? Almost nothing is seen. Why is there no follow-up on concerns about lasting adverse effects from vaccines?”

Other than being nervous about the outbreak in Tianjin, Chinese Communist Party (CCP) authorities are further worried that the virus could spread from Xi’an in Shaanxi Province, through similarly named Shanxi Province, plus Henan, and Hebei provinces, and then on to Beijing.

The cities of Zhengzhou and Xuchang in Henan Province, south of Beijing, have been hit by the virus. Henan is a major transportation route into Beijing and currently all passengers traveling by train through the province will not be allowed to enter Beijing.

Another province joining Shaanxi and Hebei provinces is Shanxi. On Jan. 6, the Shanxi Provincial Office of Epidemic Prevention and Control issued a notice requiring people not to go out of the province unless necessary. The notice also requires people entering or returning to Shanxi to immediately report to their workplaces, communities, or hotels and take nucleic acid tests.

On Jan. 9, the Epidemic Prevention and Control Office in Jincheng City, Shanxi Province said that because “the epidemic situation around our city is becoming increasingly severe,” it will be “strictly” tightening controls. Among such measures are prohibiting access to county and village roads in Henan Province to Jincheng and discouraging the return of foreign vehicles and people with a history of travel to Henan Province via high-speed, national, and provincial roads and high-speed trains.

With the 2022 Winter Olympics set to kick off in Beijing on Feb. 4, the CCP hopes to demonstrate its “institutional confidence” to the world with its anti-epidemic measures.

Beijing has also carried out its “bubble management” in the lead-up to the event to ensure that people associated with the Games, including members of foreign sports teams and Chinese participants, do not come into contact with other “ordinary Chinese.”

Given that pandemic data released by the CCP is largely regarded as illogical, it is generally not recognized by the international community. It is incomprehensible for the international community that the city of Xi’an with a population of some 12 million people has been sealed off after less than 100 officially positive infections have been found.