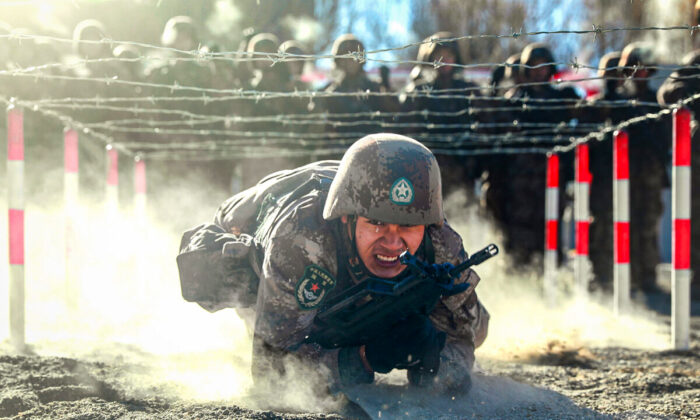 Chinese leader Xi Jinping recently issued a directive to China’s military and the armed police, asking the entire army to prepare for war and at the same time, assist local governments to “maintain stability” by handling emergencies in a timely manner.

On the afternoon of March 7, Xi attended a plenary meeting of the military and armed police delegations during the fifth session of the 13th National Committee of the Chinese People’s Political Consultative Conference. In addition to emphasizing the need to “uphold the party’s absolute leadership over the military,” he also asked the entire army to step up “war preparations,” to assist in local social stability maintenance, and with “handling various emergencies” in a timely manner.

On March 5, Premier Li Keqiang also proposed in the Chinese Communist Party’s (CCP’s) government work report that economic tasks this year should adhere to the principle of “prioritizing stability and seeking progress when stability is guaranteed.” In the 10,000-character report, the word ” stability ” was mentioned 81 times, while completely leaving out mention of Russia’s invasion of Ukraine.

“Stability” has been an ongoing concern for Xi who, at a Politburo meeting held on Feb. 25, stressed the need to “maintain overall social stability” to ensure the “smooth convening of the 20th National Congress of the Communist Party of China this year.”

Li Yanming, a U.S.-based political commentator on China affairs, told The Epoch Times on March 10 that, with the exposure of the “Iron-Chained Woman” scandal in Xuzhou, Jiangsu Province, Chinese people’s long-building anger against the CCP’s tyranny may be reaching a crisis point. Xi’s rare request for the military to assist local authorities to “maintain stability” indicates the culmination of long-festering social crises in China, with the CCP regime sitting atop a volcano that may erupt at any time.

The scandal started to circulate on Jan. 28, when a video showing a chained, middle-aged woman went viral on Chinese social media. Spotted in a village in Fengxian County, Xuzhou City, the woman allegedly gave birth to eight children. Very likely, she had been trafficked and sexually abused by the party chief of the village and her so-called husband, his brother, and his father. The incident has sparked enormous public condemnation.

According to a draft government budget report submitted by China’s Ministry of Finance on March 5 at the National People’s Congress, the regime’s rubber stamp legislature, the CCP’s military budget for this year is 1.45 trillion yuan (about $230 billion)—a year-on-year increase of 7.1 percent.

This is the first time since 2019 that the CCP’s military budget growth has exceeded 7 percent, the fastest growth rate in the past three years.

The CCP’s government work report this year set a GDP growth target of around 5.5 percent, which means that Beijing’s  military spending will outpace GDP growth. But experts suspect that the CCP’s actual military spending is much higher than the officially disclosed figure.

Su Tzu-yun, a scholar at Taiwan’s National Defense Security Research Institute, recently told The Epoch Times that some international think tanks believe the CCP’s hidden military spending may be 1.4 times greater than the official published figures, as the CCP’s military expansion is its highest priority. He believes that since Xi came to power in 2012, China’s military spending has quadrupled to 206 percent. These military expenditures are mainly used for the living expenses of personnel, repairs, maintenance, training, and investment in equipment.

Lee Cheng-hsiu, a military expert at the national security division of Taiwan’s National Policy Foundation, also told The Epoch Times that the CCP’s defense funding has always been opaque, with many spending items hidden as the CCP distributes them in different places. For example, a university’s research development funding used for military equipment research and development may be counted as academic funding. Moreover, China’s spending on social stability maintenance is huge, and part of it might have been used for armaments.

Li believes that with the Russian-Ukrainian war evolving into a quasi-world war, the risk of a war in the Taiwan Strait is getting higher and higher.

“The pandemic and the Russian-Ukrainian war have further exacerbated China’s economic crisis. The CCP regime is in trouble both at home and abroad, facing military crises, diplomatic crises, economic crises, and social crises. All these crises are closely intertwined with the CCP top-level infighting, which has intensified before the 20th National Congress,” Li said.

“At this sensitive moment, the CCP has greatly increased its military spending. Xi Jinping urged the military to ‘step up the preparation for war.’ This means the CCP is openly declaring its global military ambition, and exacerbating the military crisis in the Taiwan Strait. It will pull the trigger for the U.S.-led democracies to initiate a comprehensive campaign to restrain the CCP, including military actions,” he concluded.