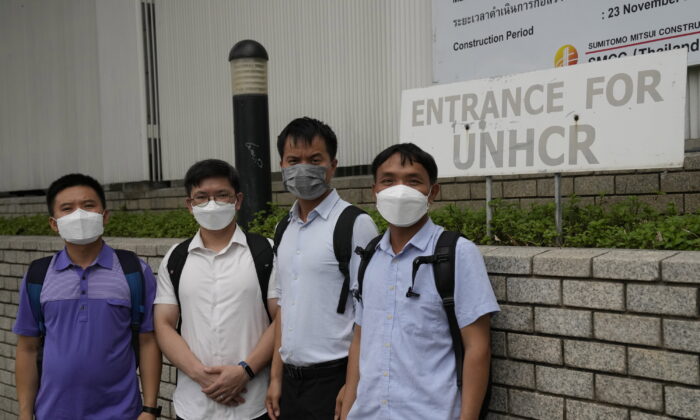 Members of the Shenzhen Holy Reformed Church in China prepare to submit their applications for asylum at the United Nations High Commissioner for Refugees UNHCR office in Bangkok, Thailand, on Sept. 5, 2022. (Sakchai Lalit/AP Photo)
China

BANGKOK—Days after flying to Thailand to seek asylum, members of a Chinese church huddled in a restaurant to share their stories with journalists. But when they peered over their shoulders, they spotted strangers taking videos of them with cellphones.

In seconds, they scattered, fearing Chinese state security had come for them yet again.

“Political pressure is rising, and there’s more and more ideological control,“ said Pastor Pan Yongguang, whose church has been on the run for years. “The persecution is growing worse.”

The story of the exile of the Shenzhen Holy Reformed Church illustrates how the Chinese communist regime is going to increasing lengths to control religious faith and its citizens, even far outside its borders.

Since leaving China for South Korea’s resort island of Jeju three years ago, Pan’s 61 congregants have been stalked, harassed, and received threatening calls and messages despite fleeing hundreds of kilometers (miles) away, he said. Relatives back in China have been summoned, interrogated, and intimidated. In one case, Chinese diplomats refused to issue a member’s newborn child a passport, rendering the baby stateless.

The Chinese Communist Party’s (CCP) tactics against the church echo ones used against the Uyghurs and other Chinese ethnic minorities abroad, as well as fugitives accused of corruption, to coerce them to return to China.

In China, Christians are legally allowed to worship only in churches affiliated with CCP-controlled religious groups, but for decades, the authorities largely tolerated independent, unregistered “house churches.” They have tens of millions of worshippers, possibly outnumbering those in the official groups.

However, in recent years, house churches have come under heavy pressure, with many prominent ones shut down. The CCP have also targeted some believers not explicitly opposed to the CCP.

Most members of Pan’s church are young, married middle-class couples, with their children making up about half the group.

The Chinese Ministry of Foreign Affairs said the matter was “not a diplomatic question” when asked for comment.

Ministering in China was never easy, Pan said. Since starting the church in 2012, it has had to move from house to house as authorities ordered landlords to turn them away. Police kept close track of church gatherings, recording attendees, and hauling Pan in for questioning from time to time. The questions grew sharper after they discovered he was ordained into the Presbyterian church in Philadelphia, sharper still after new religious regulations in 2018. Police homed in on his ties overseas.

“They want to seal off Chinese churches from the outside world,” Pan said.

Pan said the church began thinking of leaving after his friend, an outspoken pastor from the same denomination, was arrested.

The final straw came after millions began taking to the streets of Hong Kong in 2019 to protest Beijing’s tightening grip on the city. Pan said they had no connection to the protests, but authorities in their city of Shenzhen on the mainland bordering Hong Kong were on high alert under “quasi-martial law.” The church came under excruciating pressure.

Pan decided it was time to put the matter to a vote. Most members elected to leave.

“At the time, I thought maybe we could return after things settled down,” said Nie Yunfeng, who joined the church months after its founding. “I never imagined things would get this bad.”

At the beginning of this year, her parents were summoned by police and questioned about Nie’s faith, as were dozens of relatives of other church members who had left for South Korea. Officers all over the country, from central Hubei province to tropical Hainan island, threatened the relatives with confiscation of state benefits or the closure of their businesses if the congregants didn’t return to China.

“Your descendants may suffer,” they told Nie’s terrified father. “Tell them to come back right now, or else they will face serious consequences.”

Officers found Pan’s brother, sisters, and mother and accused Pan of “treason,” “collusion with foreign forces” and “subversion of state power.” Evidence obtained by Pan and seen by the AP indicates that state security was ordered to investigate the church.

They left South Korea for Thailand after meetings with local and U.S. officials made it clear that prospects for refuge were dim. Despite being home to a large, active Christian population, South Korea’s cultural and ethnic homogeneity can make it unfriendly toward refugees. Government statistics show less than 1 percent of asylum seekers were granted refuge there last year.

So, the church decided to flee again. On Monday, church members gathered outside the United Nations refugee office in Bangkok. They piled manila envelopes stuffed with asylum papers on a mailbox hanging by the entrance.

In Bangkok, members have split between different hotels and attend Sunday service on Zoom, wary of being tracked by Chinese police. They spend their days praying, worrying about an uncertain future.

Xie Jianqing, a church elder, said the transition has been tough. The church members, largely white-collar workers in the glittering high-tech metropolis of Shenzhen, had to get used to picking fruit and digging dirt in the volcanic soil of Jeju island. Now, they have no work, and their future is even cloudier.

Still, such sacrifices are worth it, Xie said. In China, he wasn’t able to give his children the religious upbringing he wanted because state schools are compulsory and mandate an atheist, communism-infused curriculum. Abroad, he said, his children can learn about the God he believes in.

“We’re willing to pay this price,” he said.