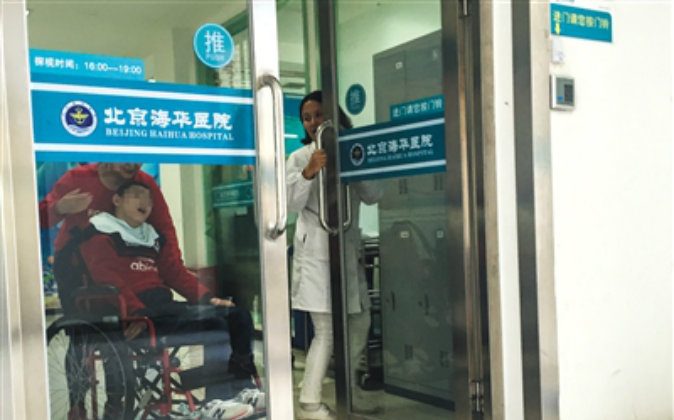 A patient suffering from cerebral palsy sits in a wheelchair at Haihua Hospital in Beijing. (Beijing Times)
China

A hospital in Beijing was recently outed for making money off a particularly defenseless segment of the Chinese population—people suffering from debilitating brain diseases.

According to an investigative report by Beijing Times, a semi-official mainland Chinese publication, Haihua Hospital in Beijing was running an elaborate con scheme aimed at sufferers of cerebral palsy and epilepsy, including children. Since the scam was uncovered, local officials have been carrying out a thorough investigation, and Chinese Internet users were left in uproar.

Haihua Hospital was found to have hired people without medical background to play the roles of “customer representatives,” “specialists” and “doctors” in the field of neurology. The nearly 50 “medical staff” at the hospital were given fake names, and instructed to answer all phone inquiries as if they were trained medical experts.

The “medical staff” were paid under an elaborate incentive scheme: Each representative would earn a base 50 yuan (about $8) per caller who showed up at the hospital, and about 1 to 1.5 percent of the caller’s medical expenses, if any. The best performing “medical staff” would receive a monthly bonus of between 300 and 800 yuan (about $46 and $123).

When patients showed up at the hospitals, they would be diagnosed by a “medical staff” wearing a doctor’s white coat.

The hospital was able to attract many patients from all over the country by spending big on advertising and television programs that often exaggerate the efficacy of its treatment.

A 20-minute program broadcast on Sichuan Television even banked on the actual medical credentials of a hospital founder and veteran doctor Yang Shaobo to boost its credibility—Yang has over 30 years of experience treating epilepsy patients—and boast that it cured 97 percent of epilepsy patients of their condition.

Zhang Guojun, the president of China Association Against Epilepsy and the head of neurology department at Xuanwu Hospital Capital Medical University, said he was aware of the advertisement starring Yang because it cost him an Association committee election in 2015.

“I have never heard of this NGC neurotransmitters diagnosis and treatment system. It is not based on science and there isn’t any research about it,” Zhang told Beijing Times. Epilepsy, Zhang added, is not a disease that can be completely treated.

“Such a high curing rate, can he back up his claim?” asked Zhang.

After seeing a Haihua television commercial in 2014, Han Jun (pseudonym) from Zhuozhou, a city in Hebei Province, brought her 3-year-old son in for a checkup. Han had long suspected that her son suffered from cerebral palsy because he couldn’t walk without assistance.

Han’s son underwent minimally invasive surgeries to his head, shoulder and leg. But his condition didn’t improve, and he even developed kidney stones, rickets and cataracts six months later. Han Jun had spent a total of 50,000 yuan (about $7,720) on the treatment.

Another parent, Liang Mengchao, brought his 8-year-old son to the Haihua in 2014 after a “customer representative” assured him that the hospital’s treatment for cerebral palsy was nearly 100 percent effective.

“They’re liars who cheat people out of their money,” Liang told Beijing Times.

Liang’s son was hospitalized for five days for a treatment that cost over 40,000 yuan (about $6,100). But Liang’s son didn’t recover. Liang only realized that he was cheated when the hospital called three months later to get him to purchase more medication.

“Xin Wei 2012” from Hainan wrote: “If there wasn’t a corrupt official behind this, such despicable hospital would have long been smashed to smithereens by people, if it hadn’t already been fined by the authorities.”

“Qi Qi and Jun” from Shaanxi wrote: “This is a dereliction of duty by officials and television stations. They allow anything to be broadcast as long as they get paid; they’ve have instead exacerbated the patient’s’ pain!”

In recent years, medical scams have been rife in China: In September 2014, four people died of carbon monoxide poisoning while riding in the back of a fake ambulance that had been remodeled from a funeral hearse. This February, a man surnamed Ye from Zhejiang Province consumed two bottles of sleeping pills—and survived because the pills were fake.