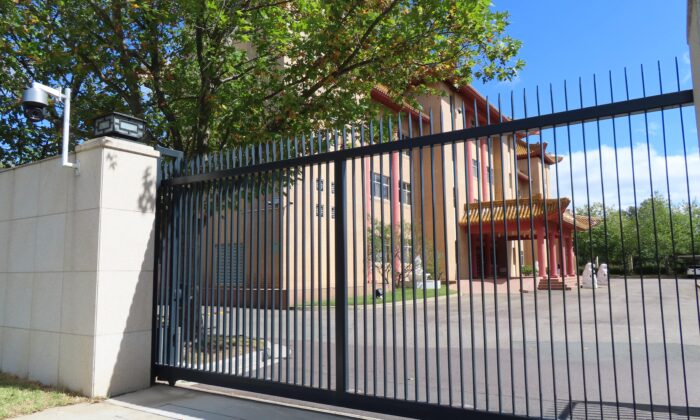 The Embassy of the People's Republic of China in Canberra, Australia, on April 1, 2022. (Rebecca Zhu/The Epoch Times)
Australia

Chinese Ambassador Xiao Qian, in an interview with the Australian Broadcasting Corporation’s 7:30 Report, said it was time the Australian government put more effort into meeting Beijing “halfway” and re-engage.

“Where exactly halfway between us, we can talk about those, but we need efforts from both sides,” Xiao said.

Sidestepping the question of whether Beijing would have any preconditions for the meeting, the ambassador said he had been working with Australian officials from the Department of Foreign Affairs to come to an arrangement. But he warned it would need to be when a “favourable atmosphere” was created.

“When there’s really a wish and the will for both sides,” he said.

Beijing representatives previously leaked a document of “14 grievances” to Australian media outlets in 2020 outlining the conditions the government would have to follow before the diplomatic freeze could be lifted.

The 14 grievances included negative commentary by Australian media and MPs about the Chinese Communist Party (CCP); calls for an inquiry into the origins of COVID-19; the government’s cooperation-building efforts with Indo-Pacific partners; banning Huawei from the nation’s 5G network in 2018; and Australia’s foreign interference laws.

Meanwhile, Australian Prime Minister Albanese said he was not aware of any overtures from the Chinese ambassador for dialogue, but he did not rule out the possibility.

Albanese has stated if Beijing was serious about fixing current relations it would need to end the trade bans on Australian goods imposed after the former foreign minister called for an investigation into the origins of COVID-19. At present, Beijing still has sanctions on beef, coal, wheat, barley, seafood, lamb, honey, and timber imports.

“It’s not Australia that’s changed, China has,” Albanese told reporters. “It is China that has placed sanctions on Australia. There is no justification for doing that, and that’s why they should be removed.”

The prime minister also said Beijing needed to withdraw its list of 14 demands.

“I, whenever asked—must have been hundreds of times now—have said that the demands, which were placed by China, are entirely inappropriate. We reject all of them. We will determine our own values. We will determine Australia’s future direction,” Albanese said.

Suggestions of a meeting from the ambassador come despite strained bilateral ties.

On Sept. 6, the Chinese Embassy in Australia accused the government of “ideological prejudice” for Foreign Minister Penny Wong’s comments regarding the United Nation’s report on human rights in Xinjiang.

Wong said the Australian government was “deeply concerned” about the findings, which detailed, credible evidence of human rights abuses and potential crimes against humanity in Xinjiang.