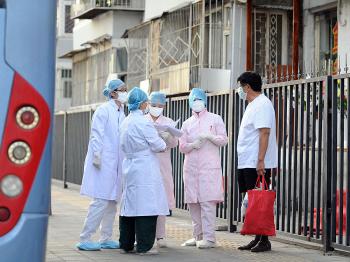 Chinese medical personnel check the Beijing neighborhood near a hostel where a group of school children are quarantined after seven people in their school were diagnosed with the swine flu, July 2, 2009. (AFP/Getty Images)
China

By Epoch Times Staff
Print
Seven students in a Beijing primary school were confirmed as A/H1N1 cases, according to a July 1 announcement by Beijing health authorities. Nine other students from the same school developed fever and are now under observation.

The Nanhu Zhongyuan Primary School, which has 941 students and 78 teachers, reported on June 30 that 18 students were absent from class, 16 of which developed fever. The students are from four classes in two grades. Six are from the same class.

The health authorities traced close contacts of the seven confirmed students, and quarantined 93 students, 20 teachers and 41 parents for observation.

The school has been closed, and all staff and students were advised to self-quarantine by staying at home.

Health authorities said on July 2 that the source of the breakout had not been identified.