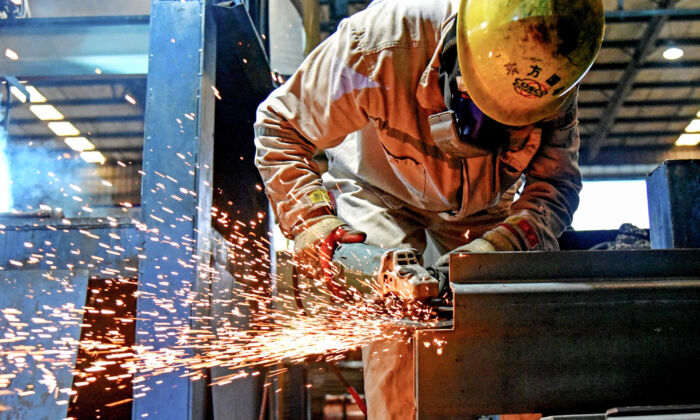 A worker uses a hand tool to make containers at a factory in Lianyungang in China's eastern Jiangsu Province on Aug. 27, 2021. (STR/AFP via Getty Images)
Analysis

Beijing Gears Up to Make Its 2022 Growth Target

An already heavy debt overhang will make it an uphill fight

Even after reporting (some would say dubiously) strong 8.1 percent growth for 2021, Beijing knows that after last year’s power shortages and new waves of COVID-19, it will have to work hard to get even the minimum targeted 5 percent real growth in 2022.

America’s movement toward monetary restraint will make the effort that much more difficult. Perhaps an even greater impediment is the lingering effects of Evergrande’s failure as well as a more general debt overhang. These burdens will make local governments reluctant to follow along with Beijing’s stimulus measures. No doubt Beijing’s power and perhaps some statistical legerdemain will enable China to declare success a year from now, but the growth reality will not come easily.

Beijing certainly has made clear the need for stimulus. The People’s Bank of China (PBOC) has already loosened the credit reins. It has released considerable bank liquidity for lending by cutting some 50 basis points (hundredths of a percent) from the proportion of funds banks much hold in reserve.

More recently, the PBOC has decreased the so-called 1-year lending prime rate (LPR) by 5 basis points to 3.8 percent. The PBOC has held other interest rates steady for the time being, but has hinted that coming months might well see more interest rate cuts.

Equally significant was the emphasis placed on growth “stabilization” by the Ministry of Finance and China’s planning agency, the National Development and Reform Commission (NDRC). At the annual Central Economic Work Conference concluded this past Dec. 10, these two agencies announced that they would pursue stabilization with tax and fee-reduction strategies and a major push to increase infrastructure spending across China.

Beijing frequently in the past has used infrastructure spending to offset the economic effects of declining demand, usually in exports. With the United States moving toward monetary restraint, it is entirely reasonable to expect such a shortfall.

In these past instances, Beijing has forwarded the infrastructure effort by pushing local governments to spend and by modestly easing credit conditions to help with the financing. Conditions today will make this procedure more difficult than it once was. For one, there is the Evergrande failure. This blow to financial confidence has already created a scramble for liquidity in China’s financial system and made people reluctant to lend and invest for fear that Evergrande debt holdings have weakened others, or that Evergrande is just the first of a list of failures. This desire for liquidity and the associated reluctance to lend and invest will blunt the impact of PBOC monetary ease and stymie the ability of the added liquidity to reach the economy.

Especially because the central planners in Beijing have frequently mistaken each localities’ infrastructure needs, much of this past borrowing and spending has gone into projects that have failed to yield a payout to the local government adequate to discharge the financial obligation. In the words of Nomura’s chief economist for China, Ting Lu, under the guidance of Beijing’s planners, local governments have built things that “no one uses.”

But the debt remains. Since outstanding debt in China already approaches 280 percent of the country’s gross domestic product (GDP), it is understandable that local governments might be reluctant to use a new round of special purpose bonds, not the least because until a few weeks ago Beijing was taking them to task for all the debt they had outstanding.

That reluctance had already become evident even before the December launch of this latest stimulus push. As of the end of last year’s third quarter, local governments had availed themselves of only 61 percent of the 3.65 trillion yuan (about $574 billion) of special purpose bonds authorized by Beijing in 2021.

The embarrassment was evident. Since that statistic became available, the Ministry of Finance has prominently advertised that local governments have used 3.42 trillion yuan (about $538 billion) of these bonds, 97 percent of the authorized figure.

Strange that after lagging all year, these local governments would suddenly step up. This fact casts doubt on the reliability of this latest figure or if reliable, that the use it claims to track was entirely voluntary.

Given the Chinese Communist Party’s power throughout China, it is a good bet that the authorities will manage to report a year from now that they have managed at least 5 percent real growth in 2022. But it will only be by dint of force (or statistical chicanery) that Beijing will present the world with such a figure.