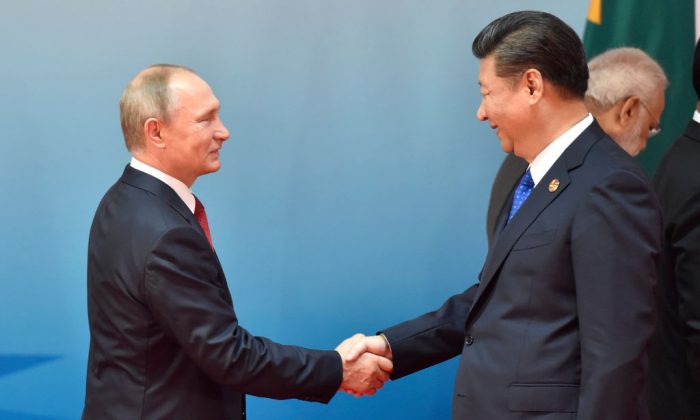 Two days before Chinese leader Xi Jinping’s birthday, he made two big moves. Analysts believe that these moves were also meant to increase his leverage as he seeks a third term at the upcoming 20th Party Congress.

In communist countries, top leaders’ birthdays are important dates for the entire nation. Xi was born on June 15, 1953.

On June 13, Xi reportedly signed an “Outline for Chinese Army’s Non-War Military Actions.” On the same day, the Chinese Ministry of Foreign Affairs suddenly changed its rhetoric and publicly claimed sovereignty over the Taiwan Strait, triggering an immediate response from the White House, which accused the Chinese Communist Party (CCP) of undermining the peace and stability of the Taiwan Strait.

The Outline, details of which are hidden from the public, was officially implemented on June 15, Xi’s birthday. Chinese state media claimed that it is aimed at safeguarding national sovereignty and security, and provides a legal basis for the People’s Liberation Army (PLA) to “conduct non-war military operations.”

Also on June 15, Xi had a phone conversation with Russian President Vladimir Putin, reiterating that the two leaders would continue to deepen Sino-Russian relations and expressing mutual support for each other’s main agendas.

Two days ago, Chinese Defense Minister Wei Fenghe publicly declared at the Asian Security Forum that the Chinese military would “not hesitate to fight” for the so-called “unification” of Taiwan.

‘Non-War’ or ‘Other Than War’ Military Operations

Based on the wording of the Outline, analysts believe that the CCP’s possible military action against Taiwan could be carried out in an “other than war” scenario.

“Considering that Russian President Vladimir Putin invaded Ukraine under the name of ‘special military operation,’ Xi Jinping may attack Taiwan in the name of anti-terrorism and anti-crime,” Yaita Akio, the director of Sankei Shimbun’s Taipei branch, said in his Facebook post on June 14. “If it is not an act of war, it can evade the relevant provisions of international law, and also may evade certain economic sanctions.”

Li Yanming, a well-known current affairs commentator, told The Epoch Times that the CCP’s recent series of actions show that China and Russia are joining forces with the common goal of changing the existing U.S.-led international order. Whether it’s Russia’s invasion of Ukraine or the CCP’s continued military threats in the Taiwan Strait, East Asia, and the South China Sea, they all target the world order and the United States, as the United States plays the role of representing and maintaining international order. At the same time, Xi is trying to add leverage to his re-election at the 20th Party Congress.

Although China and Russia have made different remarks about the phone conversation between Xi and Putin, the two sides expressed support for each other in the Russia-Ukraine war and the CCP’s strategy toward Taiwan.

“China is willing to continue our mutual support with Russia on issues concerning core interests and major concerns such as sovereignty and security,” Xi said during the call, according to a June 15 press release by the state-run Xinhua News Agency.

The Russian side stated that Xi “recognizes the legitimacy of Russia’s actions to safeguard the country’s fundamental interests in the face of security challenges created by external forces.”

Xi said that China will make independent judgments on the Russia-Ukraine war based on a broad historical perspective and on what’s right and what’s wrong. Putin responded by saying that Russia supports the CCP’s actions on issues in relation to Xinjiang, Hong Kong, and Taiwan, and that Russia opposes foreign interference in China’s internal affairs.

Heng He, a well-known current affairs commentator, believes that this phone conversation marks another landmark call after Xi and Putin talked on Feb. 25, the first day of the Russian invasion, and it has served the goal of further deepening the relationship between the two countries.

Shi Yinhong, a professor of International Relations at China’s Renmin University, told Taiwan’s Central News Agency that China now feels more optimistic about the outcome of Russia’s war in eastern Ukraine, which made China even more pro-Russia and anti-America.

Price reiterated that the United States is deeply concerned about China’s “aggressive rhetoric and coercive activity regarding Taiwan,” saying the United States “will continue to fly, sail, and operate wherever international law permits, including transit through the Taiwan Strait.”

The world has “an enduring interest in peace and stability in the Taiwan Strait, and we view this as a centerpiece of security and prosperity for the wider Indo-Pacific region,” Price added.

Taiwan has reacted strongly to the CCP’s actions. Taiwan’s top agency for cross-strait relations, the Mainland Affairs Council, issued a statement on June 14, saying that China’s remarks undermined the status quo across the Taiwan Straits and heightened regional tensions.

Taiwan’s Premier Su Tseng-chang said on June 14 that the Taiwan Strait is “by no means China’s inland sea,” adding that “China (the CCP) has never stopped or concealed its ambition to annex Taiwan.”

Japanese Prime Minister Fumio Kishida also warned at the Shangri-La Dialogue held from June 10 to June 12, that “today’s Ukraine is tomorrow’s East Asia.” He clearly pointed out that the CCP’s continued military threats in the Taiwan Strait, like Russia’s military action against Ukraine, are aimed at “shaking the foundation of the international order.”

Akio Yaita said on his Facebook page that the CCP’s claim of “internal waters” is “a blatant challenge to the International Convention on the Law of the Sea and a forcible change of the existing rules of the international community.”