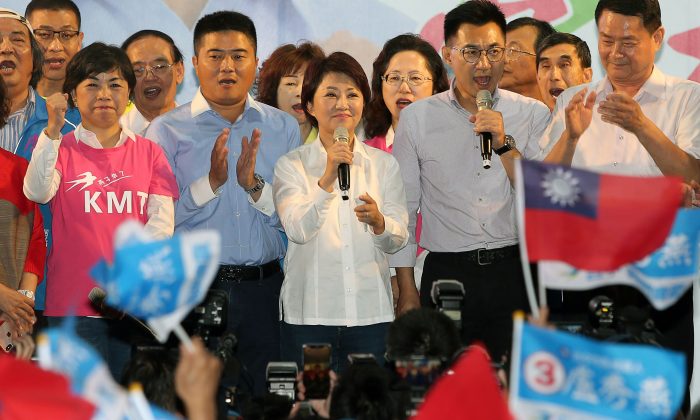 The Democratic Progressive Party (DPP) lost two important mayoral races in Taiwan’s central city of Taichung and the southern port city of Kaohsiung to the opposition party, the Kuomintang (KMT), which has in recent years taken a Beijing-friendly stance.

While Taiwan is a de facto country with its own constitution, elections, currency, and military, Beijing views the island as a renegade province that must be united with the mainland, by force if necessary.

Since Taiwan held its first direct presidential election in 1996, Beijing’s authoritarian regime has sought to influence political parties into adopting more Beijing-friendly policies. While the DPP is known for advocating formal independence from mainland China, current President Tsai Ing-wen, who belongs to the DPP, has said she wishes to maintain the status quo.

Tsai has since announced her resignation from the DPP chairwoman position, saying that she is responsible for her party’s poor election performance. At a press conference on Nov. 24 announcing her resignation, Tsai said: “Democracy has taught us a lesson today. We should be humble and embrace people’s higher demands.”

In Kaohsiung, the DPP has governed the port city for the past 20 years, with a large electorate base there. Thus, the defeat of DPP candidate Chen Chi-mai by KMT candidate Han Kuo-yu was considered a major upset.

In Taichung City, the incumbent and DPP mayoral candidate Lin Chia-lung sought to retain his seat and was widely expected to win the election. However, Lin ended up losing to KMT candidate Lu Shiow-yen by 200,000 votes.

The results have analysts talking about its ramifications for cross-strait relations.

Chen Weijian, an editor with Beijing Spring, a U.S.-based pro-democracy publication, said in a recent interview with Voice of America (VOA) that while some people might interpret the KMT’s overwhelming victory as a win for the Chinese Communist Party (CCP), he said that instead, the elections are a major blow to the Chinese regime’s authoritarian system.

“The Taiwan election once again demonstrated what is democracy. Any win by a political party is a win for democracy,” Chen said.

Beijing, in a move to boost the KMT and marginalize the DPP, has preferred to work with cities and counties that are under KMT control, such as offering more cultural and economic exchanges and programs. Kaohsiung City’s victor, Han Kuo-yu of the KMT, had run on a campaign platform of better economic ties with China.

In response to Taiwan’s election results, the Party’s mouthpiece newspaper People’s Daily published a Nov. 25 editorial on its official WeChat account, a social-media platform, stating that the DPP’s defeat was to be expected because it represents “useless and terrifying ideologies.”

In a sign of how China might act following the KMT’s victory, the editorial claimed that after Han takes office next year, China will buy more milkfish and grouper exports from Kaohsiung.

“But when Tainan City cannot [do the same], surely Tainan residents will feel upset,” stated the People’s Daily article, implying that the city—which saw the DPP mayoral candidate win—will be subject to Beijing’s retaliation.

As for public sentiment regarding Taiwan’s relations with China, Taiwanese online media Up Media, in an opinion article published on Nov. 25, pointed out that neither DPP nor KMT candidates mentioned at length their positions with regard to their China policy, indicating that there is a consensus among the general Taiwanese public that unification with China isn’t an option.

Meanwhile, the issue of Taiwan’s identity was also presented on the ballots as one of the 10 referendums. Voters were asked whether the island country should be called “Taiwan” instead of “Chinese Taipei” at international sporting events such as the Olympics. In the end, the referendum was voted down. Analysts believe this was partially due to fear that athletes would be barred from participating in international sporting events, if the name change were to happen.

Earlier this month, the International Olympic Committee had warned that Taiwan may lose its right to compete in the 2020 Games should it decide on a name change.

Nonetheless, observers say the referendum making it to the ballot reflects a growing concern in Taiwan about China’s vamped-up efforts to pressure countries into adopting Beijing’s sovereignty claims.

How China Subverted an Election

There may be free and open elections in Taiwan, but the Chinese Communist Party has been actively working to ensure that the elections go its way.
Follow Frank on Twitter: @HwaiDer
TOP NEWS