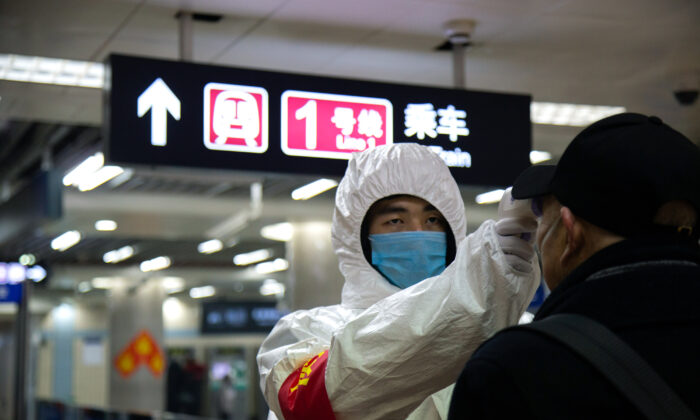 A health worker checks the temperature of a man entering the subway in Beijing, China on Jan. 26, 2020. (Betsy Joles/Getty Images)
CCP Virus

The death toll from a coronavirus outbreak in China continued to climb on Jan. 27, as authorities extended the Lunar New Year holiday in an effort to stem the spread of the disease.

Chinese Premier Li Keqiang arrived at the central city of Wuhan, the center of the outbreak, on Monday and visited patients and medical staff amid growing pressure on the regime to prove it is effectively responding to the crisis.

Thousands have been infected in China. The youngest confirmed case is a 9-month-old girl in Beijing.

Overseas, confirmed cases linked to people who have traveled to Wuhan have been reported in more than 10 countries or regions, including Hong Kong, Macau, Taiwan, the United States, and Australia. No deaths have been reported outside of China.

Several Western countries including the United States and Australia, are working to evacuate their citizens from Wuhan.

Hong Kong, which has eight confirmed cases, on Monday barred entry to residents of Hubei Province or anyone who had visited Hubei in the past 14 days. The ban did not include Hong Kong residents.

The nearby gambling hub of Macau, which has had at least one case of the flu-like virus, imposed a similar ban on those arriving from Hubei unless they can prove they are virus-free.

The city of Haikou on Hainan island in southern China said tourists from Hubei would be quarantined for 14 days.

Meanwhile, Wuhan mayor Zhou Xianwang on Monday said he and the local Chinese Communist Party leader were willing to resign amid rising criticism of the city’s slow response to the outbreak.

Zhou, in an interview with state broadcaster CCTV, said he and the local Party secretary Ma Guoqing “will bear any responsibility,” while admitting that the city had been “unsatisfactory” in disclosing information about the outbreak.

Hospitals in Wuhan have posted urgent appeals online for medical equipment. Several hospitals in the city told The Epoch Times by telephone over the weekend that they’re overwhelmed with patients. Due to lack of supplies, they’re forced to re-use disposable protective suits, which is potentially dangerous for contamination.

Earlier on Sunday, Zhou revealed that 5 million residents of Wuhan left the city before the lockdown was imposed on Jan. 23. This includes people who traveled for Lunar New Year festivities, as well as those who fled to escape the virus and impending lockdown.

Authorities extended the weeklong Lunar New Year holiday by three days to Feb. 2, in an attempt to slow the virus. During the holiday, hundreds of millions of Chinese travel to their hometown to celebrate with their families.

Contagious Even in Incubation Stage

China’s health minister, Ma Xiaowei, told reporters on Sunday that the coronavirus is contagious during its incubation period, which can last up to 14 days.

“The epidemic is now entering a more serious and complex period,” he said. “The outbreak is expected to continue for some time.”

Ma added that the virus was infectious during incubation, unlike SARS (severe acute respiratory syndrome). That outbreak which occurred from 2002 to 2003, which originated in southern China, killed nearly 800 around the world.

The World Health Organization (WHO) estimated an incubation period of two to 10 days. It is also not clear if an infected person can pass it on before they show symptoms.

Wendy Barclay, a professor and virologist at Imperial College London, said many of the respiratory viruses that spread among humans do transmit even in the absence of symptoms, and it would not be surprising if the new coronavirus also did.

“If this does prove to be the case then controlling the spread does become more of a challenge, and measures like airport screening are unlikely to stem the virus effectively,” she said.

Last week WHO stopped short of declaring the outbreak a global health emergency, although some health experts question whether China can contain the epidemic.

Some of China’s biggest companies have been affected, with hotpot restaurant chain Haidilao International Holding shutting branches nationwide from Sunday until Friday.