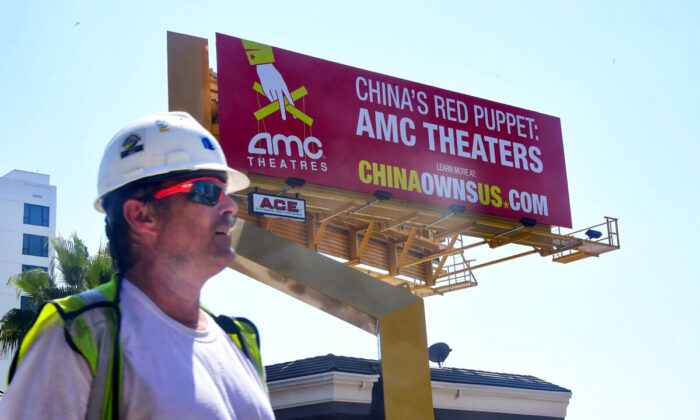 A billboard along Hollywood's famed Sunset Strip from the Center for American Security as part of its "China Owns US" campaign in Hollywood, Calif., on Aug. 29, 2016. The billboard highlights communist China's increasing influence over the U.S. movie industry, specifically AMC Entertainment, described as China's red puppet, following its 2012 sale to Chinese firm Dalian Wanda, closely aligned with the Chinese Communist Party, for $2.6 billion and control of 4,960 screens nationwide. (Frederic J. Brown/AFP via Getty Images)
Chinese Regime

Beijing Exploits Hollywood to Project a Positive Image of the CCP: Report

Beijing is manipulating Western movie and film production, especially in Hollywood, to project a positive image of itself to the world, according to a September report by a French military think tank.

The 650-page report aims at exposing the Chinese Communist Party (CCP)’s all-encompassing global influence tactics. On the cultural front, the report pointed out that the CCP has been exerting control over Hollywood studios through blacklisting, limiting access to the Chinese market, and content censorship.

While the CCP has been using films as vectors for propaganda since it took hold on China in 1949, the United States did not feel its influence until 1997, the report said. That year, three films were released that punctured the Chinese regime’s positive self-image: “Kundun,” “Seven Years in Tibet,” and “Red Corner.” While the first two focused on Tibet, a highly sensitive topic to the CCP due to its ongoing suppression of the local culture and religion, the latter depicted an American wrongly accused of murder in China.

In addition to banning the films in China, the CCP blacklisted both the directors and leading actors of the three films. The regime further barred the production companies involved from working in China for five years.

Despite the fact that the Chinese market was of a modest size, comparable to that of Peru at the time, the French report said Hollywood immediately took the message to heart.

Then-CEO of Disney Michael Eisner met with then-Chinese Premier Zhu Rongji in 1998 to apologize and promise that Disney would not produce anything like Kundun again, according to the report.

Lure of the Chinese Market

A 2020 report by PEN America, a New York-based free speech advocacy group, illustrated the regime’s treatment of Jean-Jacques Annaud, director of “Seven Years in Tibet.” In 2009, almost a decade after he was blacklisted by Beijing, Annaud agreed to direct a French-Chinese co-production film. In December 2009, Annaud apologized for his participation in “Seven Years in Tibet” on Weibo, a Chinese social media app similar to Twitter. The post has since been deleted, but it was archived by PEN America.

Annaud then signed a strategic partnership agreement with China for two films, and became a member of the Strategic Council of the France China Foundation. His biography on the foundation’s website cites many of his films but fails to mention “Seven Years in Tibet,” according to the French report.

Since then, the CCP has used a variety of tactics to influence Hollywood, along with other Western film producers, the French report states. Beijing allows three ways for foreign films to enter the Chinese market: by quota, buyout, and co-production. Censorship is applied to all three ways.

The CCP has also used the temptation of its large and lucrative market to coerce filmmakers into compliance. “We have a huge market to share with you. We want films that are heavily invested in China; we want to see positive images of China,” said the president of China Film Group Corporation, the largest state-owned film company in the world, to Hollywood producers in 2013.

China’s quarterly box office revenues exceeded those of the United States for the first time in 2018, according to the French report. It is expected to become the largest market in the world in the coming years.

A 2012 Sino-U.S. agreement limits 34 slots per year for American films to enter China. This quota is almost exclusively taken by blockbusters. The report quoted a Hollywood screenwriter saying that this quota is “a limit to freedom of expression” as studios practice self-censorship to maximize their chances to get a slot.

Buyout is another method of entry to the Chinese market that is widely used by independent films. In this instance, the foreign studio agrees to transfer all profits made in China to the Chinese distributor, in exchange for a flat fee.

The third and most popular way is co-production between a foreign studio and a Chinese studio. The report pointed out the advantage of co-production films is that they are not considered foreign, thus not subject to the quota system.

However, there are rules for the co-production films to follow, said PEN America. The rules include complying with the laws, regulations, customs, and traditions of China; respecting the rights and obligations of the Chinese regime; and contributing to the social stability of China. PEN America explained that social stability is one of the arguments used by Beijing to justify its suppression of dissidents or ethnic minorities.

Oftentimes, the co-production can be hidden. One example is the documentary series “China: Times of Xi” broadcast on the Discovery Channel in October 2017. It was a co-production between Discovery Networks Asia-Pacific and China Intercontinental Communications Center (CICC). The French report noted that CICC is managed by the State Council Information Office, which shares the same address with the Office of Foreign Propaganda of the CCP’s Central Propaganda Department. But the documentary was billed as “an independent television production.”