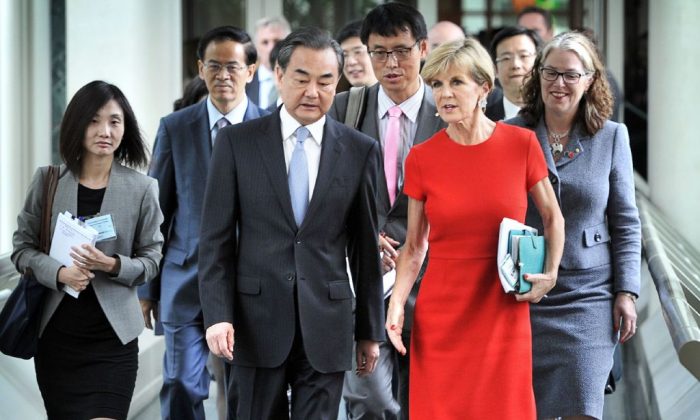 An Australian politician has revealed that Australia abandoned plans for a free trade agreement (FTA) with Taiwan due to pressure from the Chinese Communist Party.

Former Australian foreign minister Julie Bishop has disclosed to Fairfax Media what Chinese Foreign Minister Wang Yi told her at a number of meetings spanning 2017 and 2018.

“The Chinese government made it clear to me that circumstances had changed between Taiwan and mainland China, and that China would not look favourably on Australia seeking to pursue a free trade agreement with Taiwan, as New Zealand had done some years ago,” Bishop said, Fairfax reported Oct. 24.

Bishop told Fairfax that during her time as foreign minister between 2013 and 2018, she noticed the Chinese Communist Party’s (CCP’s) efforts to pressure other countries to break ties with Taiwan.

“This included in the Pacific and where some nations still formally recognise Taiwan and in some of the major multilateral forums where Taiwan had observer status to participate in such meetings,” she told the Australian media outlet.

China-Taiwan relations have been increasingly strained since 2016 with the inauguration of Taiwanese President Tsai Ing-wen, leader of the Democratic Progressive Party (DPP). Tsai and the DPP have advocated for Taiwan’s independence from China, and have refused to endorse the “1992 consensus” which would acknowledge the “one-China” policy but allowed for different interpretations.

Richard McGregor, a senior fellow at the Lowy Institute, told Fairfax that the CCP’s response to Taiwan’s pro-independent stance has been to prevent the country from building closer relationships with the rest of the world.

“Hence the pressure on Australia to back away from any FTA,” McGregor said.

“Bishop is out of office. She can say things that she couldn’t in office,” Ian Hall, professor of international relations at Australia’s Griffith University told The News Lens.

“This is a bit of signalling… She’s just adding more evidence [of Chinese interference] to the pile.”