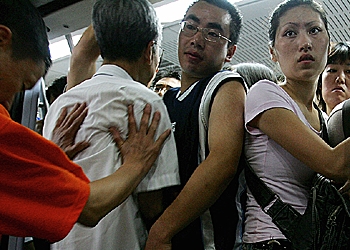 A subway worker (L) pushes commuters into a subway train in Beijing, China, an action that will not go over well with Western tourists next month. (Guang Niu/Getty Images)
International

By Jared Pearman
biggersmaller
Print
Beijing has been on a continuous crusade to improve the manners of its residents as the city prepares to host countless foreign Olympic visitors next month. Sometimes bordering on comical, these etiquette campaigns include having designated day each month to teach people how to stand in line and efforts to discourage public spitting.

However the most recent campaign, dubbed the “eight don’t asks,” may have more to it than just improving the locals’ manners.

China’s Communist rulers have begun plastering Beijing in posters outlining eight subjects that shouldn’t be broached with foreigners. The campaign is ostensibly designed to inform Beijing residents of appropriate conversational etiquette, and includes suggestions such as not asking about a foreigner’s weight and income.

“It's normal for Chinese to ask people they just met such questions, but foreigners respond negatively to such questions," the Associated Press quoted Beijing municipal government spokeswoman Wang Zhaoqian as saying.

Yet the list of “don’t asks” includes a few peculiarities. Chinese citizens are not to inquire about a foreigner’s religious or political views, where they are from, or their “personal experiences.” Heaven forbid the foreigners relay that Falun Gong is practiced freely in their home countries, or that rule of law is, in their experience, useful.

The decision to host the Olympic Games must have had some in Beijing questioning their own wisdom. After all, how is an authoritarian government to deal with a sudden influx of foreigners and journalists whose worldviews and agendas Beijing has so desperately tried to suppress within its own borders?

Beijing has already taken extensive measures to keep problematic foreigners away from the Games. Known members of the Tibetan, Falun Gong, Christian and other dissident communities have been denied travel visas regularly.

Journalists are similarly having a hard time obtaining their travel documents, and even many Westerners within China have been expelled ahead of the Games. Members of the press in China are also facing frequent harassment and intimidation of sources.

As expected, China has been especially vigilant in monitoring the internet and shutting down unofficial news publications. But protesters and press aside, how the authoritarian regime plans to deal with the almost inevitable clash of civilizations is the bigger question. What happens when Beijing residents come face-to-face with throngs of foreigners who don’t, for instance, believe that the Dalai Lama is a terrorist, or that no one died on Tiananmen Square in 1989?