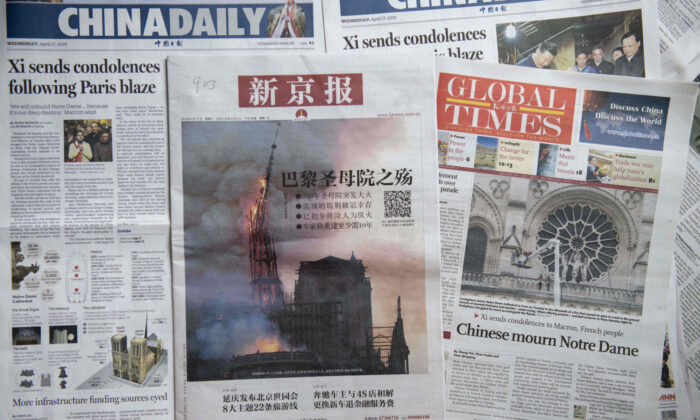 The Chinese regime is running an “extensive and sophisticated long-term” media outreach campaign to amplify its propaganda narrative globally, according to a survey by the world’s largest journalist organization.

In the survey released on June 23 and conducted with members of the Brussels-based International Federation of Journalists (IFJ) in 58 countries and territories, two-thirds of respondents said China was creating a “visible presence” in their national media.

There are also “clear signs” of Beijing targeting journalists in developing countries, such as those in Latin America, with ineffective or repressive governments, according to the organization.

Among Beijing’s key goals is pushing for favorable coverage about its grand infrastructure initiative, the Belt and Road Initiative, the IFJ found. The regime has offered special training programs, such as ten months of journalism training at prestigious Chinese universities.

The organization called the strategy “borrowing a boat to reach the ocean”: Beijing is outsourcing propaganda to non-Chinese media platforms to extend the reach of its talking points, while disguising the roots of such content.

Half of the respondents have traveled on sponsored trips to China designed to show positive aspects of the country; 36 percent of journalism unions surveyed said they were asked to sign cooperation agreements with a Chinese entity; while more than a third of them reported content-sharing partnerships with Chinese journalism unions and other outlets.

The field trips can range from two weeks to ten months, often “overwhelmingly” targeting developing nations, according to the survey.

To push back on allegations of Chinese authorities’ human rights abuses in Xinjiang, for example, some Chinese embassies have organized media trips for journalists in Islam-majority countries, encouraging them to tout Xinjiang’s economic success and tourist attractions. Uyghur Muslims and other Muslim minorities in Xinjiang have been heavily persecuted by the Chinese regime, with an estimated one to two million sent to concentration camps where they are coerced into giving up their faith. Entrepreneurs with business stakes in China have also acted as proxies to help initiate such trips.

In Australia, dozens of journalists from influential media have traveled to China on Chinese government expenses since 2016, according to the IFJ. At a roundtable in Burma, each of the nine journalists there received and took at least two sponsored tour offers, with one of them visiting China nine times.

Journalism unions from at least eight countries in Asia Pacific, Africa, and Europe have signed Memoranda of Understanding (MOU) with Chinese entities, according to the IFJ survey.

The agreement often involves non-disclosure agreements and thus lacks transparency, the IFJ noted. The terms in some agreements have required unions to participate in Chinese-government-held events.

In the Philippines, the Presidential Communications Group, a government office that oversees the country’s state-controlled media entities, staff members have been to China for months-long training and fellowships. The office signed an MOU agreement with the Chinese government agency, National Radio and Television Administration, in 2019.

Such partnerships have made an impact in the journalists’ writing. “The way they [staff at Philippines office] write their stories now, they reflect the way how Xinhua or how the state media in China is writing their stories,” said one journalist from the Philippines who was surveyed, adding that, “it’s normally propaganda.”

The regime is increasingly “‘buying boats’ or ‘building’ them” to diffuse state-approved content into overseas media, the IFJ said.

Satellite TV packages with Chinese state media channels have been set up and sold across Africa, expanding state propaganda’s reach.

The U.S. administration recently sought to curb Chinese media outlets’ operations in the country. The State Department has so far identified a total of nine Chinese state-run agencies as foreign missions.

China Daily, an English-language outlet under China’s Publicity Department, has spent millions running supplements in major U.S. newspapers, according to the U.S. Department of Justice documents.