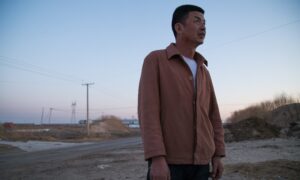 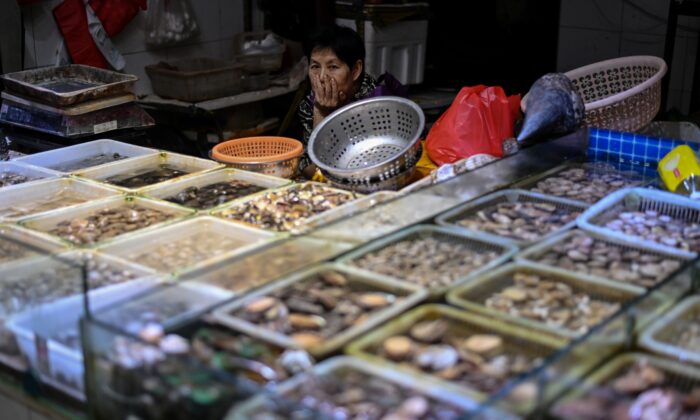 A seafood vendor is waiting for customers at the Huahuan Zhenbei agricultural products market in Shanghai, on Aug. 25, 2020. (Hector Retamal/AFP via Getty Images)
Thinking About China

The article discussed issues such as “the standard for food waste,” which includes imposing fines. “Radio stations, TV stations, and online audio-video service providers who produce, release, or spread content advocating gluttony will also receive a fine,” the report stated.

For such an article to occupy Xi’s propaganda space can only mean one thing: China is facing a food shortage crisis.

In early December 2020, Reuters reported that for the first time in nearly 30 years, China purchased 100,000 tons of rice from India.

China is still able to buy soybeans, corn, pork, and beef from the United States. But rice, a staple in China, can only be imported from Southeast Asia. Border tensions with India remain high, so China’s import of rice from India indicates that Chinese rice reserves are seriously low.

Now, the Chinese Communist Party (CCP) has suddenly promoted “anti-food waste” and drafted legislation, which means that China has officially entered a period of food shortage.

The Xinhua article stated that Chinese lawmakers “began deliberating a draft law on preventing food waste to ensure food security. … The law is of great significance in promoting a healthy, rational and green lifestyle, and better consumption behavior.”

It went on to state: “Catering service providers should adopt measures to minimize food waste such as improving the management systems for food purchasing, storage, and processing. They should post signs to remind customers to refrain from ordering excessive food … they can charge customers for wasting food. … Catering service providers who encourage or mislead consumers to order excess food and cause obvious waste … should be warned. If they refuse to make corrections, they can be fined between 1,000 yuan and 10,000 yuan.”

This could be the world’s rarest piece of legislation that requires catering service providers to enforce the law or else they would face punishment.

Another Xinhua report, headlined “Consolidating Land for Cultivation and Turning the Seed Industry Around,” was a follow-up of the food supply issue that was mentioned during the Central Economic Work Conference that took place a few months ago.

The article stated, “Grain in the hand spares panic in the heart,” and “solving the problem of seeds and cultivated land is one of the key tasks in the coming year … to ensure food security.”

It seems that CCP leaders are panicked over food shortages.

The article also stated, “The amount of arable land in our country has declined in recent years.” This is tantamount to exposing the lie about bumper harvests every year. Cultivated land has been declining, but bumper harvests continued. The CCP has been repeating the same bogus story since 1949.

The report continued, “It’s urgent to continue to advance research on improved varieties of crops, livestock and poultry … solve a batch of bottlenecks … to provide solid support and stabilize China’s rice bowl.”

Actually, China has long relied on imported seeds, and the CCP has also sent its own scientists to the United States to steal seeds. For decades, American laboratory seeds and genetically modified technology have increased China’s agricultural output.

The CCP has always claimed that it has solved the Chinese people’s food problem. Now, the fact is completely exposed that laboratory seeds have ensured high harvest yields, but the crops produced can’t be used as seeds for the following year as these are terminator seeds. If planted, their yield and disease resistance will be much lower, or they won’t germinate at all. This is the nature of artificially cultivated seeds.

To ensure high yields every year, China has continuously relied on imported seeds. China’s thousands of years of crop traditions have completely been destroyed under the CCP’s rule.

With the U.S.–China relations seriously deteriorating, the top CCP leaders fear the United States could block seed exports to China. If crop seeds are banned, it will really be a life-threatening issue.

The CCP’s media now propagates a law against food waste, but it isn’t just a response to a temporary food shortage. The CCP is worried about a long-term food problem. And once again, it’s the Chinese people who suffer the consequences.