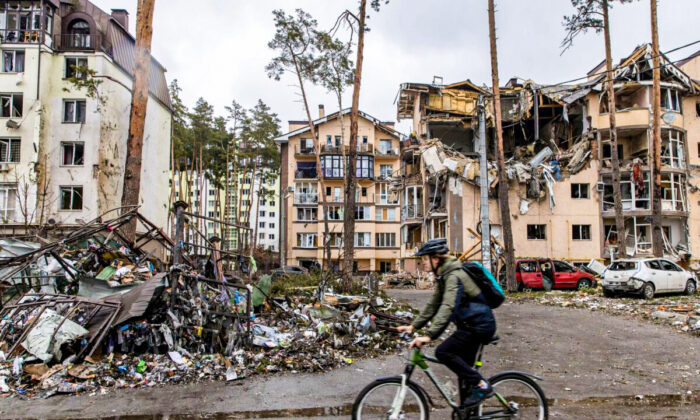 Shortly after Russia invaded Ukraine, a short video uploaded by a user of short-video platform Douyin, known as TikTok overseas, showed an elementary school teacher telling students that Ukraine is a “prodigal” child of the former Soviet Union.

In this video, a female teacher, whose face was not shown, vehemently told dozens of sixth-grade students in class that Ukraine should have been the proudest country as it inherited the largest military legacy of the former Soviet Union at the end of the 20th century, but it is a prodigal and therefore now a most regrettable nation.

In the video, the teacher also engaged the students, asking them to take turns to answer a question—what legacy Ukraine had inherited from the former Soviet Union. Towards the end, she asked another question, “What have we learned from this incident?”

The answers from students included “stick to our own path,” which is a quote from Chinese leader Xi Jinping, and “study diligently,” a communist slogan for students.

U.S.-based China affairs commentator Li Yanming told The Epoch Times that the Chinese Communist Party (CCP) has clearly launched another propaganda campaign to shape the views of the Chinese people in regards to the Ukraine conflict, instilling pro-Russian and anti-U.S. propaganda, promoting the narrative that Ukraine is suffering now because of its affinity for the West.

“In addition to the media, the regime also uses school classrooms to indoctrinate—even elementary school students are not spared,” Li said. “The CCP’s unscrupulous inculcation makes people suspect that it is secretly supporting Russia in its invasion of Ukraine.”

Independent writer Zhuge Mingyang told The Epoch Times that Ukraine provided enormous help to the CCP’s military development following the collapse of the Soviet Union, including sending top engineers to China. The Liaoning aircraft carrier, the first aircraft carrier commissioned into the CCP’s navy force, was actually bought from Ukraine as the unfinished “Varyag” and then rebuilt in China. Ukraine provided a full set of drawings to help China succeed in this project.

Yet the CCP has now turned around to call Ukraine a prodigal, he said.

Li thinks that the Russian-Ukrainian war was probably the result of CCP-Russian collusion.

“In the context of the boycott of the Beijing Winter Olympics by Western countries, Putin participated in the Winter Olympics as the only VIP to support the CCP, while the CCP blatantly supported Russia after the outbreak of the war. There must have been some kind of secret agreement between the two,” he said. “In fact, in the context of Western sanctions, they choose to stand together and provide support for each other, but at the same time, they have their own secret agendas.”

Russia released a statement on Feb. 25 saying that the CCP has expressed “respect” for Putin’s military action. Li believes this indicates that behind the scenes, the CCP approves of Putin’s invasion of Ukraine.