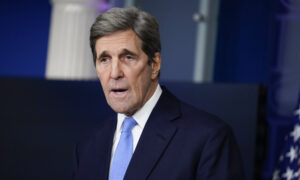 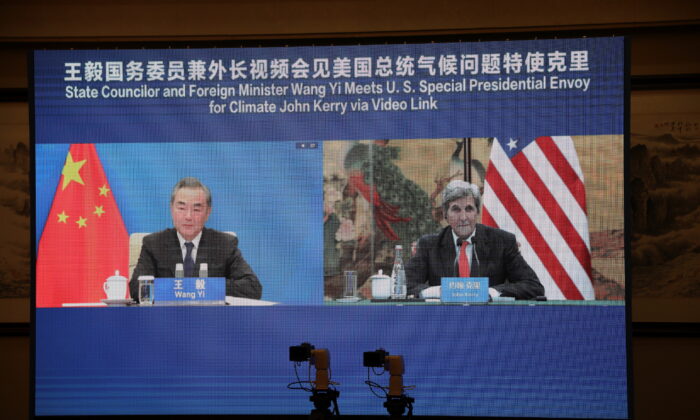 U.S. Special Presidential Envoy for Climate John Kerry is seen on a screen with Chinese State Councillor and Foreign Minister Wang Yi during a meeting via video link on Sept. 1, 2021. (U.S. Department of State/Handout via Reuters)
US-China Relations

Chinese Foreign Minister Wang Yi has given U.S. climate envoy John Kerry a set of instructions that the United States should follow if the Biden administration seeks Beijing’s cooperation on climate change.

Kerry is currently on the second leg of his Asia trip for negotiations on climate action. He first traveled to Japan before arriving in the Chinese port city of Tianjin on Aug. 31 for a three-day visit. He’s scheduled to meet with Xie Zhenhua, China’s special envoy for climate change affairs.

On Sept. 1, Kerry and Wang held a virtual meeting to discuss bilateral cooperation on climate change. During the talks, Wang mixed in demands for the Chinese Communist Party’s (CCP’s) political goals and warned Kerry that “China-U.S. climate cooperation cannot be separated from the wider environment of the Sino-U.S. relations,” according to a statement from China’s foreign ministry.

As for how to improve bilateral relations, Wang demanded that Kerry “pay attention to and pro-actively respond to China’s ‘two lists’ and ‘three bottom lines.’”

Wang was referring to the lists and three demands that Beijing handed to U.S. Deputy Secretary of State Wendy Sherman in late July when she visited Tianjin. One of the lists asked the United States to correct its “wrongdoings,” including revoking its sanctions on CCP officials, which were announced by the United States in response to widely reported human rights abuses.

Among its demands, the CCP requires the United States not to “infringe” upon China’s “sovereignty” in the troubled regions of Xinjiang, Tibet, and Hong Kong. Many Western governments, including the United States, have called out the CCP for its human rights violations in these three regions, particularly over the detention of more than 1 million Uyghurs in Xinjiang.

Wang had listed the same requirements to Secretary of State Antony Blinken days earlier, when the two discussed bilateral cooperation on Afghanistan over the phone.

According to a short video clip of the meeting released by CGTN, the international arm of China’s state-owned broadcaster CCTV, Kerry told Wang during the meeting, “China, my friend, plays a super critical role” in efforts to combat climate change.

The statement didn’t mention Wang’s demands of the United States.

In March, Wang and Yang dressed down Blinken and national security adviser Jake Sullivan during an in-person meeting in Anchorage, Alaska. Yang lashed out at the United States over what he said was its struggling democracy and poor treatment of minorities, while criticizing its foreign affairs and trade policies.

China’s Vice Foreign Minister Xie Feng followed up by bombarding Sherman with complaints and accusations during her visit in late July.

On Aug. 31, China’s newly appointed ambassador to the United States, Qin Gang, in another event hosted by the National Committee on U.S.–China Relations, threatened “disastrous consequences” if U.S. politicians aim to “suppress” China with a “Cold War playbook.”

“Actions to address climate concerns cannot benefit forced labor and cannot link our energy needs and supply chains to the PRC [People’s Republic of China], nor should Special Envoy Kerry rely on the word of a genocidal regime with a history of ignoring international agreements,” McCaul wrote in statement.

“We must neither sacrifice our values nor forget the track record of failed commitments with the CCP.”