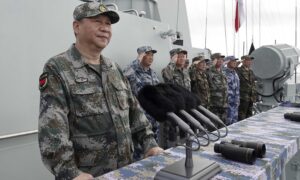 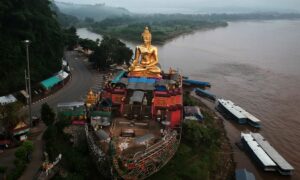 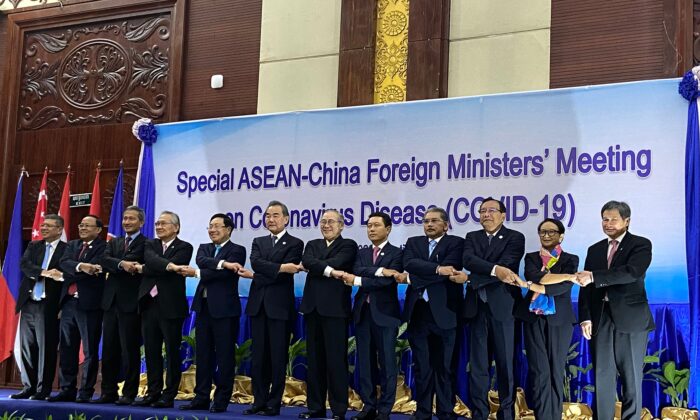 ASEAN Secretary-General Lim Jock Hoi and foreign ministers shake hands on stage at a summit between China and ASEAN (Association of Southeast Asian Nations) on the COVID-19 coronavirus in Vientiane, Laos, on Feb. 20, 2020. (Dene-Hern Chen/AFP via Getty Images)
Asia & Pacific

Chinese investment in Southeast Asia, its biggest trading partner, has given the small oil-rich sultanate Brunei a major economic shot in the arm, particularly as it looks to take on the chair of ASEAN in 2021.

Trade between the two countries jumped a staggering 108 percent in the first eight months of the year despite COVID-19. Exports from Brunei to China also increased from $200 million to $950 million, according to the The Borneo Bulletin.

Last month, China’s Hengyi Petrochemical, a chemical fibre product manufacturer, announced plans to spend $13.65 billion to build the second phase of a refinery and petrochemical complex in Brunei’s Pulau Muara Besar. That is on top of the $3.45 billion investment already in place for the first phase of the project, which contributed B$110 million ($81.24 million) to Brunei’s GDP last year.

Beijing’s increasing influence in the region, notably via its trillion-dollar Belt and Road Initiative (BRI), has raised concerns that it seeks to put ASEAN members on a tight leash while claiming territorial and navigation rights in the highly disputed South China Sea—an oil and gas-rich maritime route.

Critics have long accused China’s ruling Chinese Communist Party (CCP) of using the “debt-trap diplomacy” to lure countries that have claim over parts of the South China Sea into indebtedness; among ASEAN recipients are Brunei, Vietnam, and the Philippines.

Once a critic of China’s unlawful territorial claims, Philippines President Rodrigo Duterte recently drew criticism for conceding to China, citing diplomacy even on claims to Manila’s sovereign rights to areas within its exclusive economic zone.

“We have to go to war and I cannot afford it. Maybe some other president can but I cannot … Unless we are prepared to go to war, I would suggest that we better just call off and treat this, I said, with diplomatic endeavours,” said Duterte during his fifth State of the Nation Address in July.

Just a year ago, Duterte was forced to defend his decision to sign unfavourable loans with China that could cost the Philippines its gas fields if it defaults obligations for the Chico Dam, according to Bloomberg.

“If you borrow huge sums of money from China and you cannot pay—you know when a person is a borrower, he is under the control of the lender,” said Mahathir, who aborted $22 billion worth of Chinese-funded projects awarded by his predecessor Najib Razak.

Malaysian Prime Minister: It Is Not Malaysia’s Job to Promote China’s Ideologies

Cases of ASEAN countries bowing to Beijing for defaulting loans funded under BRI include Sri Lanka, which lost ownership of Hambantota port and 15,000 acres of land in 2017; and Laos, which surrendered the majority share of its national power grid Électricité du Laos Transmission Company to China last month.

A Pawn in Beijing’s Games?

It also suggested that the long-time ally of Beijing will cement profitable ties with China, at a time when other claimants have “rallied against China on the South China Sea dispute.”

It remains to be seen if Brunei will follow Philippines footsteps in the South China Sea tussle, but all eyes will be on ASEAN nations as to who else will bite the remaining carrots in the lead up to the 37th ASEAN summit in 2021.