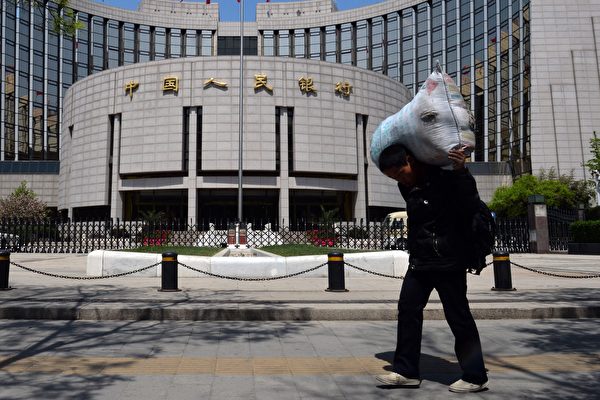 A Chinese migrant worker passes by the People's Bank of China in Beijing on May 1, 2013. (Mark Ralston/AFP)
China Business & Economy

China’s economy is shrinking and financial risks increasing under the impact of “zero-COVID” policies and regional lockdowns across the country.

On March 25 the China Banking and Insurance Regulatory Commission (CBIRC) established the country’s first financial stability fund. Supplied by China’s banks and other institutions, the fund is intended to help shield the country from financial risks.

China’s State Council asked the People’s Bank of China and other institutions to establish the fund no later than the end of September. To meet this deadline, the People’s Bank issued the Financial Stability Law (Draft for Comments) on April 6, claiming this was necessary since the resolution of financial risks had become “an eternal theme.”

The severity of the financial risk was revealed on May 10 when the China Orient Asset Management Co. released its 2022 China Financial Non-Performing Assets Market Survey Report. It said the non-performing loan balances of commercial banks would continue to climb this year along with the non-performing rate. The increased pressure from the risk of loan defaults would also be felt by small and medium-sized banks, trust companies, real estate firms, and local financing entities.

According to Albert Song, a political and economic researcher with the Tianjun independent think tank, “China’s internal financial risks are significant, with multiple break-out points.” One example, he said, was the debt crisis of real estate developers. The crisis has the potential to affect over 40 related industries that may already be saddled with heavy debts.

Further fueling the crisis is the high household debt ratios of China’s residents, which are mainly mortgages.

He said, “Under the situation of the economic downturn and the lockdown of cities due to the ‘zero-COVID’ policy, these crises can break out at any time and are likely to have a knock-on effect.”

Included in the May 16 issue of Qiushi magazine, the official journal of the Chinese Communist Party (CCP), was a featured article authored by the CBIRC’s Party Committee titled “Perseverance in Preventing and Resolving Major Financial Risks.” The article claimed more than 600 high-risk financial institutions had been closed or later restored in the past five years. Specifically named were the Baoshang Bank, Jinzhou Bank, Hengfeng Bank, and Liaoning City Commercial Bank.

The CBIRC also announced the framework for China’s first Financial Stability Fund had been created after nearly $9.7 billion in startup funds had been raised.

‘Battle of the Silver Coins’

The article also reiterated the so-called “Battle of the Silver Coins” and “Battle of the Rice and Cotton,” which were initiated by the CCP when they usurped power in 1949 and tried to replace the silver-based currency with the renminbi (RMB) and to control the market price of goods.

The “Battle of the Silver Coins” occurred on June 10, 1949. Shanghai army troops and police force surrounded and seized the securities building and arrested 250 people. The price of silver coins plummeted from 2,000 yuan to 1,200 yuan the next day, and the price of rice also dropped by 10 percent.

The “Battle of Rice and Cotton” occurred later, with the CCP trying to reduce the price of these two commodities in major cities such as Shanghai by transporting them from other locations.

To illustrate the significance of the two actions in helping establish communist power, the article said this was comparable to the three major battles between the CCP and the government of the Republic of China (ROC).

Albert Song provided additional insight on the CCP’s past conflicts with the ROC during a May 20 interview with The Epoch Times. He said the “Battle of the Silver Coins” and the “Battle of the Rice and Cotton” were prompted by people’s distrust of the communist regime and its issuance of the renminbi. The CCP intervened through administrative orders and political means, suppressing national capitalists and businessmen.

In regards to the CBIRC article, Song said, “The fact the CCP now reiterates these incidents reveals an intervention agenda and does not rule out similar actions, such as mandatory foreign currency settlements against some cities, economic and financial sectors.”

He added, “It could also significantly reduce the $50,000 annual exchange quota available to Chinese citizens for overseas travel and spending for education and other purposes.”

The CCP’s mandatory foreign currency settlements apply not only to private citizens but also to companies. China has a practice of allowing export companies to keep a portion of their foreign currency earnings for use in doing business.

A meeting was held on April 22 between the CCP’s central bank, regulators, and senior managers from numerous domestic and international banks in China, according to the Financial Times. They met to explore how to minimize China’s risks associated with international sanctions.

One of the options discussed included increasing onshore U.S. dollar holdings through mandatory foreign currency settlements, in which the CCP’s central bank requires exporters to convert all foreign currency earnings into RMB.