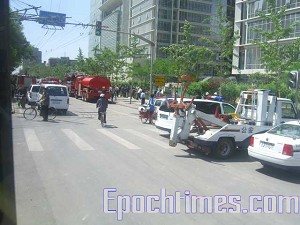 After the accident, many ambulances, fire trucks and police cars arrived at the construction site. (The Epoch Times)
China

On the morning of May 17, Beijing local time, a large part of the construction area at the Baishiqiao construction site in Haidiang District in Beijing collapsed. Many people were killed after being buried beneath the debris. Neither Beijing local news and nor CCTV reported on this accident, and the public says authorities are covering up the facts. Because all information regarding the accident is tightly blocked by officials, there is no way to know the number of people who are were killed or injured.

A witness disclosed, “This extremely huge construction area, located 200 meters south of Beijing Baishiqiao, used to be in use by the Beijing Light Automobile Plant. The plant was relocated to a suburb of Beijing and the property was sold to the developers to build luxury apartments.

After the accident, many ambulances, fire trucks and more than ten police vehicles arrived at the construction site.

Excavators are currently working hard trying to find the bodies of those workers who were buried alive. A witness said that there were over ten emergency vehicles parked aside waiting. At the time of the release of this article, emergency vehicles are still heading towards the accident scene. The accident area is guarded by police and nobody is allowed to enter.

The witness said that this accident is much worse than the subway collapse that happened in Suzhouqiao[1], Haidian District on March 28. This accident happened on the same day that a big meeting was held by the Chinese Communist Party (CCP) and left another stain of the CCP's record. Many have criticized that the CCP is responsible for government developers having gone crazy for earning money and not seeming to care anymore about safety and human lives.

An error occurred on the server. Please contact the web team so this error may be resolved. Please remember to provide the URL and the time when the error occured.