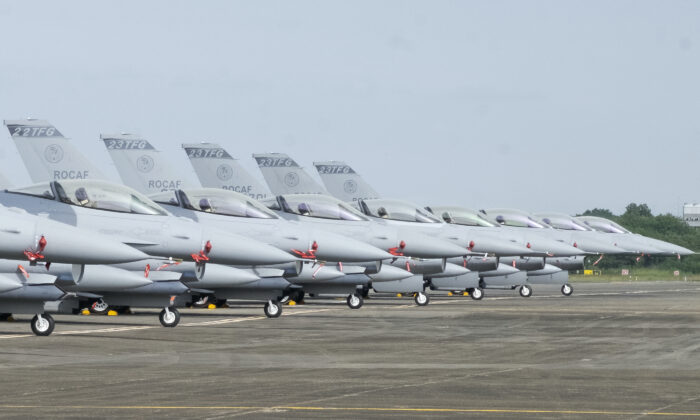 Some of the newly commissioned upgraded F-16V fighter jets are seen at a airforce base in Chiayi in southwestern Taiwan on Nov. 18, 2021. (Johnson Lai/AP Photo)
Taiwan

There are signs that Beijing has doubled down on its spying efforts in Taiwan in recent years amid rising tension across the Taiwan Strait. Analysts have expressed both concern and optimism.

In the past decade, at least 21 serving or retired Taiwanese officers with the rank of captain or above have been convicted of spying for China, according to a Reuters review of court records on Dec. 20 and reports from Taiwan’s official news agencies. At least nine other serving or retired members of the armed forces are currently on trial or being investigated on suspicion of contacts with spies from China, the review shows.

The convicted officers were found guilty of recruiting spies for China or passing a range of sensitive information to China, including contact details of senior Taiwanese officers and details of Taiwan’s agents in China.

Those cases reveal that China has mounted a broader campaign to undermine the democratic island’s military and civilian leadership, corrode its will to fight, extract details of high-tech weapons, and gain insights into defense planning, according to Taiwan spycatchers and former military officers in the island and the United States.

Former major general Lo Hsieh-che is reported to be the highest-ranking officer arrested for allegedly spying for China in 50 years. He was the head of the electronic communications and information department in the Army until his arrest in early 2011.

Beijing’s agents often begin softening their targets with offers of small gifts, drinks, and meals, said Lu. Handlers typically pay richly for the first piece of secret information extracted from current or retired officers. This payment would later be used to blackmail them into supplying further intelligence at a much lower price, according to Lu.

The Chinese Communist Party (CCP) will also entice prospective Taiwanese spies to accept free overseas trips where they would meet their Chinese handlers and other CCP officials. The official documents allege that six serving and retired officers received all-expenses-paid trips to South Korea, Indonesia, Malaysia, Thailand, and Singapore, as well as Chinese cities including Shenzhen, Hong Kong, and Macau.

As China rattles sabers for an invasion of Taiwan, having advance knowledge of defensive plans, communication codes, weapons sites, and troop locations will offset some of the difficulties of the attack, according to analysts. Disloyal officers might also refuse to fight, misdirect their troops, or defect to the attackers.

In a September report about the Chinese military, Taiwan’s defense ministry acknowledged that in an attack, agents for China “lurking” on the island could strike at command centers to “decapitate” Taiwan’s military and political leadership, as well as demoralize its armed forces.

“The repeated cases of the most senior level of Taiwan armed forces officers being convicted of espionage has got to have a psychological effect on the officer corps and in the ranks,” said Grant Newsham, a retired U.S. Marine Corps colonel. “And, once you can create doubt in the honesty of one’s leaders, the rot sets in and deepens.”

Legislator Wang Ting-Yu noted light penalties for spying crimes in Taiwan. “Currently, our biggest challenge is our judges lack the awareness of national security,” said Wang. In fact, the heaviest punishment for CCP espionage-related offenses could be death, based on the island’s latest legal provisions.

A specialized court might be an alternative to battling spying crimes in the democracy, recommended Su Tzu-Yun, director of the Defense Strategy and Resources Division of the Institute for National Defense and Security Research in Taiwan. “Our enemies will use every means to expand their spying network,” he warned. However, he believes that Taiwan will close its national security loopholes.

“We wouldn’t have to worry about the issue too much,” he stressed.

Reuters and Luo Ya contributed to this report.