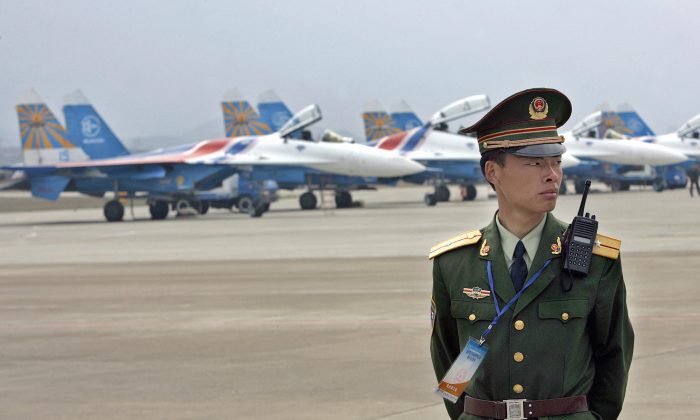 Beijing Chafes At US Sanctions Over Its Purchase of Russian Arms

The Trump administration imposed sanctions on the Chinese military on Sep. 20 for buying fighter jets and missile systems from Russia, in breach of a sweeping U.S. sanctions law punishing Moscow for meddling in the 2016 U.S. election.

The U.S. State Department said it would immediately impose sanctions on China’s Equipment Development Department (EDD), the military branch responsible for weapons and equipment, and its director, Li Shangfu, for engaging in “significant transactions” with Rosoboronexport, Russia’s main arms exporter.

The sanctions are related to China’s purchase of 10 SU-35 combat aircraft in 2017 and S-400 surface-to-air missile system-related equipment in 2018, the State Department said.

They block the Chinese agency, and Li, from applying for export licenses and participating in the U.S. financial system. All Li’s assets in the U.S. have been frozen, as well as his U.S. visa.

It also adds them to the Treasury Department’s list of specially designated individuals with whom Americans are barred from doing business.

The U.S. also blacklisted another 33 people and entities associated with the Russian military and intelligence, adding them to a list under the 2017 law, known as the Countering America’s Adversaries Through Sanctions Act, or CAATSA.

Doing significant business with anyone on the U.S. blacklist can trigger sanctions like those imposed on China.

President Donald Trump on Sep. 25 issued an executive order intended to facilitate implementation of the sanctions.

Members of Congress, including many of Trump’s fellow Republicans, who passed the sanctions bill nearly unanimously, have repeatedly called on the administration to take a harder line against Moscow.

Administration officials said they hoped the action against EDD would send a message to others considering buying the S-400.

The Chinese Communist Party (CCP) regime reacted strongly to the sanction, expressing anger and demanding they be withdrawn.

Xie Tian, a professor at the Aiken School of Business at the University of South Carolina, told the Chinese-language Epoch Times on Sep. 25 that the EED is responsible for purchasing weapons and military equipment. The Chinese regime imports equipment from Russia and exports armaments to third world countries. These capital flows require international financial institutions to function.

According to Xie, if the EED is banned from trading with any U.S.-related financial institution, it would be difficult to do business with any other country in the world apart from Russia.

“If European financial institutions trade with the CCP,” he said, “the United States will also impose sanctions on them. In effect, financial systems around the entire world will stop making weapons deals with the Party, which would be a critical blow.”

Heng He, an expert in China issues, told the Chinese-language Epoch Times on Sept. 26 that in his view, the sanctions are mainly a result of the CCP regime’s failure to abide by standard international practices.

“This is a counterattack by the United States for the Party’s deceiving and taking advantage of the international community over the past few decades,” Heng He said. “Both the trade war and military sanctions are just part of the counterattack for the Chinese communist regime’s challenging and disrupting the international order.”

On Sept. 23, Tang Jingyuan, a U.S.-based commentator on Chinese current affairs, told the New York-based NTD Television that the shock that comes with the military sanction is much greater than that of the increasing U.S. tariffs on Chinese exports.

Tang believes that however devastating the tariffs may be, the Chinese regime can always transmit the costs of the trade war to the Chinese populace. However, much of the wealth owned by top Party officials is stored in the United States and other Western countries.

These officials, Tang said, are most afraid of having their assets frozen and not being able to get visas to travel abroad. Many of them are “naked officials” whose children and spouses have emigrated, meaning that sanctions directed against them personally would cut them off from their wealth and their families.