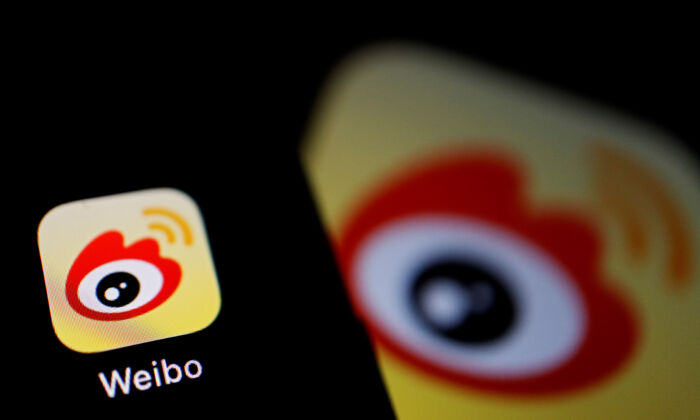 The logo of Chinese social media app Weibo is seen on a mobile phone on Dec. 7, 2021. (Florence Lo/Reuters)
Chinese Regime

China’s Twitter-like social media Weibo has blocked an outspoken entrepreneur and demographer after he critiqued the communist regime’s harsh ‘zero-COVID’ policy, the latest instance of Beijing shutting down speech inconsistent with officially-sanctioned narratives.

James Liang, a graduate of Georgia Institute of Technology and a former researcher at ORACLE, is the co-founder and chairman of the board of directors of China’s largest online travel company, Trip.com Group. He is also a professor of economics at Peking University with a focus on population studies.

Weibo suspended Liang’s account for “violating relevant laws and regulations” but offered no detailed explanation. His last update was posted on April 29.

Notably, nearly all of his posts on Weibo focus on China’s population issues, including the one-child policy, low fertility rate, and the aging population. In his last post, he tactfully criticized China’s National Population and Family Planning Commission (NPFPC) for misrepresenting birth data to maintain its domestic influence and interests.

“The total fertility rate [TFR] announced by the NPFPC far exceeded those released by the National Bureau of Statistics,” wrote Liang, citing a table of summary between 2006 and 2016. In 2010, he noted, China’s TFR—the average number of children that would be born to a woman over her lifetime—was only 1.2, based on the country’s latest census, while the NPFPC stated that the actual figure was close to 1.8.

The demographer also accused Beijing of paying scant attention to international cooperation and the role of independent scholars in the process of population policy making.

Meanwhile, Liang indirectly rebuked China’s zero-COVID policy in an April 17 post. “Globally, many countries and regions have eased COVID shutdowns and restrictions,” he said. “Latest data suggest their deaths [rates] have not bounced back [up]. Instead, the figures continue to decline.”

As a reminder, he said that in Shanghai, the rate of severe cases of COVID was less than one in 10,000 and the death rate was below one in 100,000 despite more than 300,000 infections in the Chinese financial hub.

He warned that China would sustain tremendous financial losses and lose lives due to secondary disasters if its current epidemic prevention policies go unchanged. Even in normal times, the most populous country in the world has more than 3,000,000 deaths from cancer and 4,570,000 deaths from cardiovascular diseases each year, he said.

The annual revenue of his own company has been dramatically affected by the pandemic. In 2021, the group’s net operating income was 20.02 billion yuan (about $2.97 billion), which is not quite 56 percent of the 2019 pre-COVID figure.

The entrepreneur contended that China should use flexible anti-COVID strategies that accord with the changing pandemic situation and the virus variants.

Neither Liang or anyone at his company responded to a request for comment.