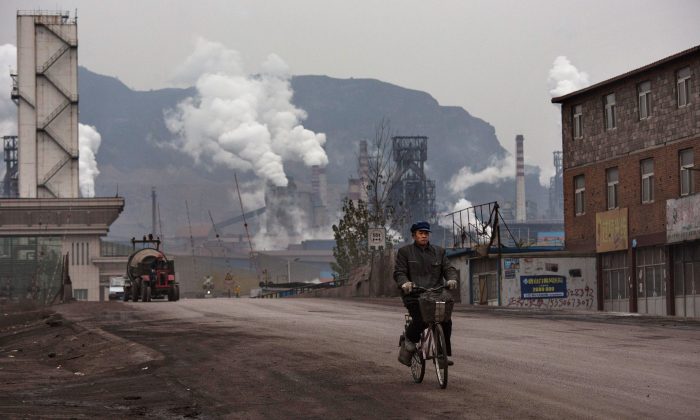 A Chinese worker rides his bike as smoke billows from a nearby steel factory on Nov. 19, 2015 in the Hebei Province, China. (Kevin Frayer/Getty Images)
Business & Economy

Beijing Can’t Have It Both Ways on SOE Reform

After dabbling with letting companies fail last year, Beijing recently announced that the official policy to reform state-owned enterprises (SOEs) going forward will be mergers and acquisitions. China will rule out drastic changes and a “wave of layoffs” to focus on reorganization and consolidation instead, said Xiao Yaqing, head of China’s State-owned Assets Supervision and Administration Commission (SASAC) at a conference on March 12.

Last year, the SASAC presided over consolidation of several large state firms in the strategically important telecommunications, energy, and transportation sectors. Xiao claimed that as a “success” and more of the same will come in 2016.

The Chinese economy—with its reliance on manufacturing and traditional industry—is sputtering. Reforming the dominant state sector is a key first step in Beijing’s plan to diversify into a services and consumption-driven economy.

JPMorgan estimates that China’s 150,000 SOEs employ 17 percent of urban residents, and account for 22 percent of its industrial income and 38 percent of industrial assets. They also make up a vast majority of China’s ballooning corporate debt.

But for China, economic policy is always intertwined with politics. The No. 1 mandate for Chinese Communist Party is self-preservation, and massive layoffs and deep structural changes are bad politics. The social and political fallout from the type of SOE restructuring required is something the Party cannot stomach.

Former premier Zhu Rongji enacted the first round of SOE reform in the 1990s. Bloomberg estimated that Zhu shut 60,000 companies and eliminated around 40 million jobs. The reform was deep, painful, but ultimately successful in helping to launch China’s subsequent economy growth.

Today, China has ambitious plans for its SOEs. State companies must transfer 30 percent of their profits to the central government by 2020—up from the 15 percent or less requirement today. By 2025, China hopes these SOEs will be profitable enough to go public.

Officially, Beijing is earmarking much of the cash to fund retirement and healthcare costs for an aging population, but most likely, the funds will go to defense spending, espionage, and security/monitoring of its residents.

Against this backdrop, SASAC’s plan of SOE reform is a head-scratcher.

Consolidating SOEs into bigger ones will minimize job losses in the short term. But in the long term, it will worsen the structural problems inherent in a dominant state sector.

In fact, merging and consolidating the state sector could prevent Beijing from achieving its lofty goals. Slow, lumbering SOEs will become even slower and more lumbering. Bureaucracy and red tape will increase, and decision making process will suffer. Also, the size, scale, and bias of large government owned companies could dwarf and decimate smaller, private rivals and put them out of business—hampering the private sector growth that Beijing wishes to cultivate.

For proof, China needs to look no further than Heibei Province, which is right outside the walls of Beijing.

For the third quarter 2015, operating income at Hebei Iron and Steel fell 24.9 percent from the year prior and 19 percent from the previous quarter. Such losses have been trending over the last several quarters. It’s also mired in debt—as of Sept. 30, 2015, the company’s short and long-term debts are 55 percent of its gross assets.

Simply put, Hebei Iron and Steel, a behemoth formed after rounds of mergers, is performing even worse than before.

One can argue that Hebei Iron and Steel offers anecdotal evidence, as the steel industry has been mired in a global slump for years. But many of China’s SOEs in the banking, shipping, and consumer-goods manufacturing sectors face similarly distressed outlooks. It’s hard to envision that after consolidation, such companies can compete with nimbler rivals on the international stage.

The province couldn’t consolidate its way into the future. Hebei, which lies in China’s northern rust belt and produces about a quarter of China’s steel output, has decided its only recourse is to trim capacity and close plants. Chinese business journal Caixin reported March 9 that Hebei plans to shut down more than half of its steel plants—240 out of 400—within the province by 2020.

The final toll? One million workers will be laid off in the next two years.

Fan Yu
Fan Yu is an expert in finance and economics and has contributed analyses on China's economy since 2015.
TOP NEWS