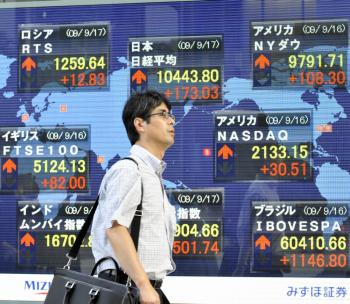 A businessman passes before a share prices board in Tokyo. Beijing purchased a net 457 billion yen (US$5.3 billion) of Japanese government debt in June. (Yoshikazu Tsuno/AFP/Getty Images)
China

Epoch Times Staff
View profile
Follow
biggersmaller
Print
Beijing purchased a net 457 billion yen (US$5.3 billion) of Japanese government debt in June, extending a record acquisition of Japan's bonds seen since the start of the year, according to a report released by Japan's Finance Ministry. China has become one of Japan’s largest creditors.

Japanese Finance Minister Yoshihiko Noda welcomed the purchases, though other elements in the Japanese polity harbor suspicions about Beijing’s intentions.

According to Goldman Sachs estimates, the total government debt in China is 15.7 trillion yuan ($2.31 trillion), accounting for 48 percent of the 2009 GDP, while the total debt in the U.S. accounts for 50 percent of GDP. The internationally recognized national debt level is no more than 60 percent of GDP.

Japan's Prime Minister Naoto Kan warned in his first policy speech to the Japanese Parliament that Japan could face a financial crisis similar that of Greece if it doesn’t tackle its colossal debt.

Yu Fenghui, a senior China financial analyst predicts that China is running a high risk by investing substantially in Japanese government bonds. He commented: “We need to note that the liquidity of the Japanese yen is far worse than that of the U.S. dollar and the Euro. It will be quite difficult to sell once the market is against yen; this is why only 4.6% of the Japanese debt is held by foreigners or foreign institutions.”