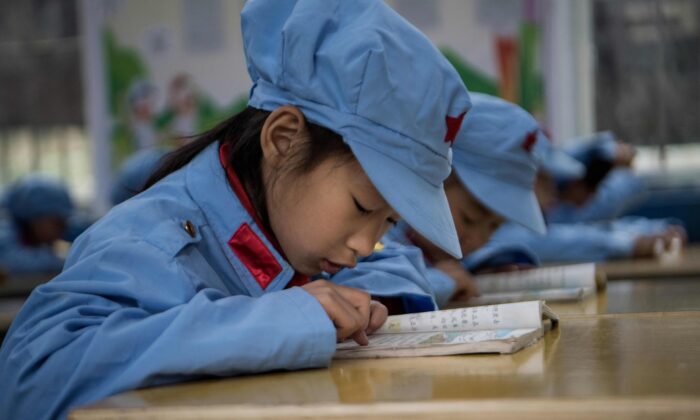 Beijing has officially banned the use of teaching materials from outside China from the country’s primary and middle schools, a move that critics saw as the regime’s latest attempt to control Chinese citizens’ thoughts and minds.

In a guideline published on Jan. 7, the country’s Ministry of Education said that the schools offering the nine-year compulsory education—consisting of primary and middle schools—are no longer allowed to use “foreign teaching materials” for textbooks.

The same ban also applies to high schools, that is, grades 10 to 12, with the exception of those that have partnerships with foreign institutions or approved exchange programs.

The new rule forms part of the regime’s growing efforts to tighten controls and censorship on education and civil society, including measures aimed at instilling “patriotic education” in its citizens from a young age.

The authorities will standardize textbooks on particular subjects such as ideological and political education, literature, history, and those relating to national sovereignty, ethnicity, and religion. Schools are not allowed to use unapproved versions or make casual alterations to the content, according to the notice.

High schools with exchange programs, vocational colleges, and higher institutions can selectively use foreign content provided that “the domestic teaching materials really cannot satisfy educational needs,” a spokesperson for the National Textbook Committee Office, a department within the Ministry of Education, said in a Tuesday press conference.

In that case, the schools are encouraged to use versions translated and distributed by Chinese publishers, according to the spokesperson.

The spokesperson said the policy was consistent with the “correct political direction and value alignment.”

The textbooks “must reflect the will of the Party and the country,” the guideline stated.

In an article on Jan. 8, the state-run broadcaster CCTV said “the key to basic education textbooks is to … deeply implant red genes in students,” referring to the color of the Chinese Communist Party (CCP).

Martin Whyte, a retired Harvard professor and a visiting China research fellow at the Victoria University of Wellington, told The Epoch Times in an email that the incident was as “another instance of the increasingly strict crackdown on unorthodox ideas.”

He noted the “ever-tightening ideological controls” on tertiary institutions, such as university professors losing their jobs for expressing thoughts not conforming to the Party lines.

Yang Shaozheng, an China-based scholar and former professor at Guizhou University, said that the goal of such regulation is to further strengthen the CCP’s grip over education.

While the traditional role of education is to develop talents in all professions, Chinese schools today are only “grooming Party slaves,” Yang told the Chinese-language edition of The Epoch Times.

After schooling, the Party’s control extends into the workplace.

“Currently among the various trades in society, as long as there is an organization, there will be a party secretary from the CCP, and they assume leadership in everything,” Yang added.

Chinese nationals also have an obligation to install apps meant for “ideological indoctrination,” Whyte noted. Tens of millions of Party officials, civil servants, and journalists were pressured last year to download one such app, called Xuexi Qiangguo, or Study the Great Nation, to immerse themselves in the latest political doctrines daily and answer quizzes. Research has identified backdoors in the app that could give authorities “superuser” access to spy on the users.

“[M]any if not most Chinese intellectuals, as well as foreign observers” who hope to see improvement on intellectual freedom find these recent developments “very depressing,” Whyte said.

Yang said he believed the idea that the “Party is absolute authority” is likely becoming the norm in China.

The CCP “starts from the babies, so that the Party ideology will be deeply ingrained in the youths’ brains … and eventually they act according to the Party’s directives and their goal is complete,” he said.

The Chinese regime in the past few years has stepped up its regulation of the education sector.

In mid-December, Fudan University in Shanghai, one of China’s top academic institutions, dropped the phrase “freedom of thought” in the school charter, which was approved by the Chinese Ministry of Education. In addition to removing all phrases mentioning “independence” and “freedom,” the charter also added a pledge to follow the Party leadership.

“Higher institutions are no longer a space for freedom and independence, but a CCP ‘concentration camp’ for brainwashing students,” Xia Xiaoqiang, an overseas-based Chinese political commentator for the Chinese edition of The Epoch Times, wrote at the time.

Also in the same month, a state-run library in western China drew wide criticism for its public book burning, a move applying a new government policy. The education ministry had asked libraries in all primary and secondary schools to “clean up” any books that are “illegal” or “inappropriate.”

The library staff burned 65 “illegal publications” page by page in front of the entrance, including religious books and “tendentious” magazines or media, according to a local government post praising the act.

In July 2019, China’s cabinet-like State Council issued an opinion banning schools from “replacing national curriculum with regional or school-based curriculum,” as well as the use of any unapproved materials.

In September 2018, the education ministry asked education administrators nationwide to have a “thorough inspection” of the textbooks used in local primary and middle schools to “maintain the authority and seriousness of textbooks.” It also asked textbook publishers to report on whether they had made unauthorized changes to certain materials. Failure to report accurately would result in serious consequences, it warned.

In January 2015, then education minister Yuan Guiren said that they “absolutely cannot allow teaching materials that spread Western values or ideologies into Chinese classrooms,” and nor are teachers allowed to “vent discontent” or “spread various negative sentiments to students,” according to state-controlled media Xinhua.