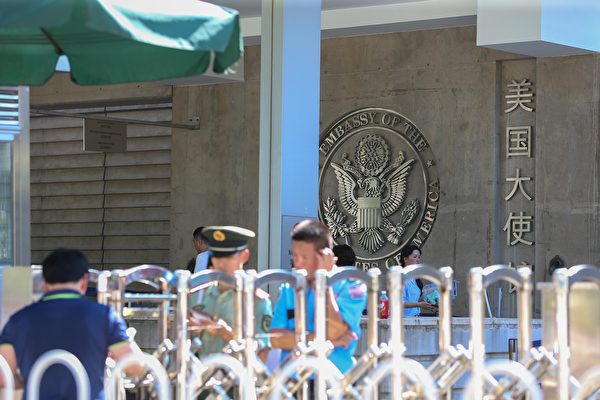 As the U.S.-China trade war continues, tensions between the two nations have escalated. The Chinese regime is attempting to stir up anti-American sentiment among its people. On Oct. 10, the United States Embassy in Beijing hosted a forum on the topic of educational transformation in modern China. However, local security forces prohibited people from attending the event, using the excuse that China is in a bitter trade war with the United States. Some people who showed up at the U.S. Embassy for the event were taken away by police and held in custody.

The United States Embassy in Beijing often hosts educational events that are open to the general public and free of charge. Experts and academics from various fields share their experiences and thoughts. On Oct. 10, the Embassy hosted a lecture called “Paul Monroe and the Educational Transformation of Modern China.” However, local authorities did not allow the Chinese people to attend the event.

Beijing resident Chen Hongwang and his son, who is in his second year of high school, were looking forward to the event because they thought it would have been a good educational experience for them. But the local authorities stopped them from attending the event on Oct. 10. Chen spoke with New Tang Dynasty Television (NTDTV) on Oct. 12 about his experience. Chen said that while he was waiting in line outside the United States Embassy (to get inside), the local police stopped him.

Chen said, “The policeman said ‘the U.S.-China trade war is going on, so contact with the American people is prohibited.’ He asked for my ID card, then other policemen came over and they forced me to get into a vehicle.”

Chen said there were other Chinese people who were also stopped from entering the U.S. Embassy and were taken away by local police. Chen and three others were detained at the Maizidian Subdistrict police station in Beijing, and they were released at midnight.

Beijing human rights activist Ge Zhihui told Radio Free Asia (RFA) that on the eve of Oct. 10, when she arrived outside the east gate of the U.S. Embassy, several police stopped her. The police took her into custody and she was not allowed to eat and drink. Ge was released later that night.

Ge said that in the past, she had attended many events at the United States Embassy and she was never stopped by the police. But it was different this time. The police told Ge that she could not attend the event because China is in a trade war with the United States.

“The trade war has nothing to do with us. I have food to eat, so I don’t pay much attention to the trade war,” Ge said.

Beijing resident Guo Likun also showed up at the United States Embassy for the event.  But the police told her to leave because there was no event. But Guo had an invitation letter (for the event) which she showed the police. The police ignored the invitation and took her away, along with three others. The four were detained at the local police station. Guo said the Beijing police only “bullied” people.

Guo said, “The police didn’t allow us to go inside (the venue). It’s crazy! The police arrested us without any legal documents…they arrest anyone and do as they please. I only came to attend this event.”

Who Benefits From the Trade War?

If the Chinese regime engaged in fair trade practices, then its people would really benefit from it. The Chinese people could buy imported luxury cars without the hefty price tag; they could buy non-contaminated American and Australian infant milk formula; and they could have access to affordable and safe vaccines.

The CCP controls all aspects of society, but many mainland Chinese find it increasingly difficult to continue living under such conditions.