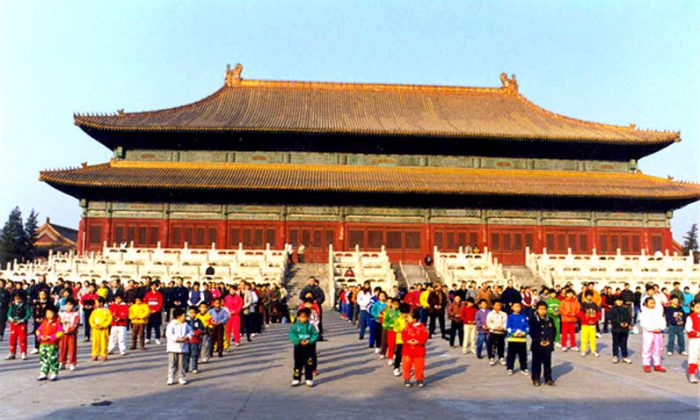 Practitioners of the Falun Gong spiritual practice doing standing exercises in Beijing before the persecution began in 1999. (Courtesy of Minghui.org)
China Human Rights

Beijing Artist Tortured for His Faith for Past Decade, Denied Right to Appeal His Prison Sentence

Beijing artist Qin Wei is passionate about art and philosophy. During his years studying at the prestigious Central Applied Arts Academy (now known as Tsinghua Academy of Arts and Design), he would wake up at 3 a.m. to read books on ancient masterpieces and their creators.

He later became an arts teacher at a local middle school. During summer breaks, he would make his own art. Eventually, his artwork was recognized and was exhibited in Germany.

At this pivotal moment in his life, Qin was introduced to the Falun Dafa, also known as Falun Gong, spiritual practice. He read through the main book of teachings, “Zhuan Falun,” and felt he finally understood the true meaning of life.

When the Chinese regime began its persecution of Falun Dafa practitioners in China, Qin wanted desperately to tell people the truth about Falun Dafa, as the state authorities had spread hate propaganda across its state media to turn public opinion against the faith.

As a result of his efforts, he has been arrested, sent to labor camp, and imprisoned several times in the past decade.

According to Minghui.org, a U.S.-based website that tracks the persecution of Falun Dafa in China, Qin endured all sorts of torture while imprisoned. He has been beaten with high-voltage electric batons until he could barely breathe. At one point, he was forced to go 30 days without sleep, with police shouting loudly every time he drifted into sleep.

As a result of the persecution, Qin lost his job. He began making a living as a private drawing instructor. Even though he did not have much, Qin kept his tuition low so people could afford his lessons.

In May 2016, after he gave a passerby a copy of “The Nine Commentaries on the Chinese Communist Party” (CCP), an award-winning, book-length editorial by The Epoch Times exposing the crimes of the CCP, Qin, now in his mid-50s, was once again arrested and sentenced to 2.5 years in prison.

He is currently detained at the Qianjin Prison in Tianjin City. His 84 year-old mother is concerned about his well-being.

According to Minghui reports, when lawyers recently attempted to visit Qin to file an appeal for his case, the prison denied Qin visitation rights.

On Nov. 2, Qin’s family visited the prison with two lawyers they had hired. The prison staff who received them said Qin refused to renounce his faith in prison, and began making phone calls, making the family and lawyers wait.

Eventually, a police officer came. In a menacing manner, he asked the family and lawyers what their opinion of Falun Gong was, then told them that since Qin had not requested an appeal, the family could not see him.

However, Qin’s family said that when they visited him in October, Qin expressly asked about how to appeal his case. The family had told him they had already hired lawyers and asked him to memorize the lawyers’ names. At the time, Qin told them he was trying to write an appeal letter, but has met with disapproval from prison staff.

The lawyers have filed a complaint with the judicial department. According to the CCP’s own laws, lawyers are allowed to visit prisoners whom they represent.

In the first half of 2017, lawyers in China have helped 186 practitioners plead not guilty in court. Most practitioners are arrested under dubious charges.

Ye Feng contributed to this report.