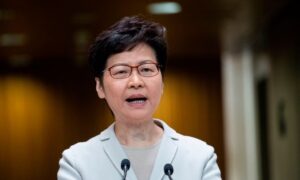 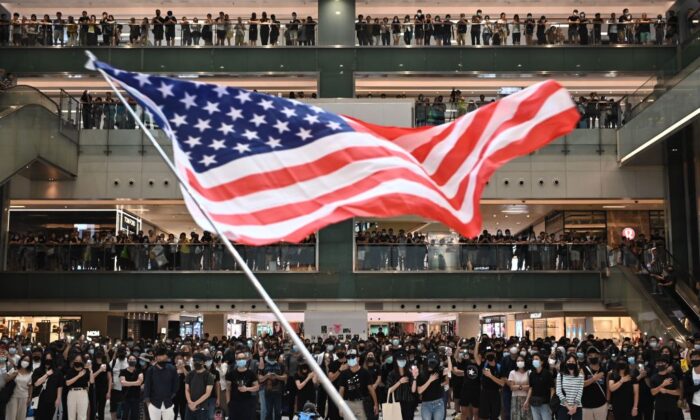 On Nov. 27, U.S. President Donald Trump signed the Hong Kong Human Rights and Democracy Act (S.1838) and another bill (S.2710) that would prohibit the export of control equipment to the Hong Kong police, who have been criticized for violent and heavy-handed tactics when dispersing protesters.

“I signed these bills out of respect for President Xi, China, and the people of Hong Kong,” Trump said in a statement Nov. 27. “They are being enacted in the hope that Leaders and Representatives of China and Hong Kong will be able to amicably settle their differences leading to long term peace and prosperity for all.”

The Hong Kong Human Rights and Democracy Act requires the U.S. Secretary of State to annually review whether the former British colony is “sufficiently autonomous” from China to justify its special economic privileges under the United States-Hong Kong Policy Act of 1992. Additionally, the law paves the way for sanctions on both Chinese and Hong Kong officials who have violated human rights in the city.

Thank you for all those in the U.S. Congress who have worked so hard to push the #HKHRDA in the past five years. Thank you for standing with our ppl.

This would not have been possible without the determination and sacrifices of brave Hongkongers.#StandwithHK

China’s Ministry of Foreign Affairs, in a statement following Trump’s signings, stated that the United States was “interfering with its internal affairs” and has “sinister intentions” to “damage Hong Kong’s prosperity and stability.”

The Foreign Ministry urged the United States not to be “stubborn,” otherwise China would “resolutely take countermeasures.”

The Foreign Ministry announced that its vice minister, Le Yucheng, had summoned U.S. Ambassador to China, Terry Branstad, to talks on Nov. 28, to directly protest the signing of the Hong Kong Human Rights and Democracy Act into law.

The Hong Kong government in a statement expressed “strong opposition” to the two pieces of legislation because they “clearly intervene in Hong Kong’s internal affairs.”

The statement quoted an unnamed government spokesperson, who said the two acts were unreasonable, adding that the United States has sent “an erroneous signal to protesters, which is not conducive to alleviate the situation in Hong Kong.”

The Hong Kong and Macao Affairs Office, Beijing’s highest agency for managing Hong Kong affairs, said that Trump’s signing of the Hong Kong Human Rights and Democracy Act into law was a “serious trample” on the basic principles of international law and international relations, according to its statement.

The office then accused the United States of being the “biggest black hand that creates chaos in Hong Kong.”

Terence Chong, an associate professor of economics at the Chinese University of Hong Kong, told The Epoch Times, that the passage of the Act was more a “symbolic gesture, than [having] any real commercial impact.”

The conditions that make the city a financial center, such as the free flow of people and capital, its rule of law, and low tax rates, are not impacted by the U.S. law, Chong said.

Today marks a historic day for US-Hong Kong relations – and a new era and phase to Hong Kongers’ ongoing struggle and fight to preserve their autonomy and freedoms and achieve democracy and universal suffrage. #HongKongHumanRightsandDemocracyAct #PROTECTHongKongAct

Washington-based nonprofit Hong Kong Democracy Council (HKDC), tweeted: “Our work at #HKDC now turns toward ensuring the U.S. admin make use of and implement fully the measures included in these laws.”

Alvin Yeung, a pro-democracy lawmaker and head of Hong Kong’s Civic Party, told local media on Nov. 28 that the two U.S. bills represented the international community’s acknowledgment of the voice of Hongkongers.

Yeung added that the Hong Kong government now has the responsibility to act in accordance with international standards and to show the world that the “one country, two systems” model is being truly implemented in the city.

Civil Human Rights Front (CHRF), the main organizer behind many of the mass marches that have been seen since June, took to its Facebook page to urge people to turn out for a Thanksgiving Day rally at Edinburgh Place in Central.

The rally, which will begin at around 7 p.m. local time, will show appreciation for the U.S. enactment of the Hong Kong Human Rights and Democracy Act, while calling for immediate sanctions on members of the Hong Kong government officials and the police force.

Joshua Wong, activist and the iconic figure from the 2014 Umbrella Movement, tweeted that the Hong Kong Human Rights and Democracy Act “signifies fundamental change of US’s China policy and a new stage of the US-HK relation.”

“Moving on, @demosisto and I will continue our efforts in other countries to encourage similar legislative efforts and sanctions mechanism,” Wong added.