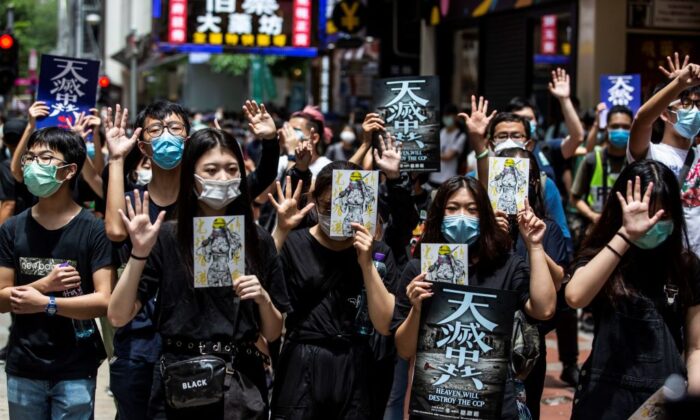 Hong Kong and Chinese state-run media have resorted to strongly worded rhetoric against the Trump administration in response to the president’s decision on Friday to rewrite ties with the former British colony.

Trump’s decisions came after Beijing adopted a national security law for Hong Kong on Thursday, which would grant Beijing’s security apparatus the ability to operate in the Chinese-ruled city. Among the measures announced by Trump were revoking Hong Kong’s special trading status with the United States and imposing sanctions on Hong Kong and Chinese officials responsible for “directly or indirectly involved in eroding Hong Kong’s autonomy.”

The Hong Kong government, in a statement released on Saturday night, said that Trump and his administration “continue to smear and demonize” Beijing’s rights to “safeguard national security” in the city.

The Chinese Communist Party is crushing what made Hong Kong different from the rest of China. As a result, the President no longer believes it’s justified to treat Hong Kong the same as before. The U.S. will defend itself from the tyranny of the CCP. pic.twitter.com/OJNoDoPvRJ

The statement also accused Trump of ignoring “the facts on the grounds” when the president said on Friday that “China has replaced its promised formula of ‘one country, two systems’ with ‘one country, one system.’”

Before Trump’s Friday remarks on Hong Kong’s political model—whereby Beijing promised to retain Hong Kong’s autonomy upon the city’s transfer of sovereignty from Britain to China in 1997—pro-democracy activists and lawmakers also expressed that with the security law’s passage, “one country, two systems” had come to an end.

The Hong Kong government has defended Beijing’s decision to implement the security law, casting aside concerns that the U.S. decision could impact the city’s economy.

“We are not unduly worried by such [U.S.] threats,” the Hong Kong government said, given its trade with the United States accounted for a small percentage of its total trade.

Two Hong Kong officials, Justice Secretary Teresa Cheng and Secretary for Constitutional and Mainland Affairs Erick Tsang, have shrugged off the possibility of being named in the U.S. sanctions, while speaking to local media.

Chinese state-run newspaper People’s Daily accused the United States in a May 31 editorial of “stigmatizing and demonizing” the “legitimacy” of China’s national security law on Hong Kong.

In a commentary published on the same day, it claimed that the United States was playing with “hegemonism” in a “shameless way” with its proposed sanctions.

“The Chinese Communist Party’s aggression in Hong Kong has taken away their autonomy and has violated the terms of the Sino-British treaty. We will always stand with the freedom-loving people of Hong Kong and for our shared democratic values,” said Rep. Michael McCaul (R-Texas), GOP leader of the Foreign Affairs Committee, in a press release.

He added: “The Chinese Communist Party officials responsible for these human rights abuses must be held accountable.”

Sen. Marco Rubio (R-Fla.) applauded Trump’s decision to “pressure Beijing to honor its commitment to Hong Kongers and their freedoms” in a press release.

“As Beijing once again undermines democracy, we cannot let them profit from violating the Joint Declaration and trying to crush the spirit of Hong Kong’s people,” Rubio said.

For years, the Chinese government and CCP has worked to undermine #HongKong’s autonomy. @POTUS is doing what is necessary to protect Americans and Hong Kongers. We cannot let #Beijing profit from breaking int’l agreements. #StandWithHongKong

On Sunday, Ted Hui, a lawmaker of Hong Kong’s Democratic Party, told local media RTHK that local protesters should not give up in their fight for freedom and democracy.

Law, a former local lawmaker, said Trump was absolutely right in saying that “one country, one system” is the reality now in Hong Kong. He added that continued protests, international pressure, and ongoing efforts by pro-democracy lawmakers would be needed to force Beijing to drop the security law and answer protesters’ five demands, such as universal suffrage and an independent inquiry into instances of police violence. Such calls emerged in the mass protests triggered by a controversial extradition bill last year.

Wong, an iconic student leader from the 2014 Umbrella Movement, said Trump’s announcement was the symbol of a new era in the U.S.-Hong Kong relationship—the result of Hongkongers’ nonstop protests since June.

The Hong Kong Public Opinion Research Institute (HKPORI) held a press conference on Friday, releasing the results of an online survey polling 10,996 people between May 25 and 28.

Of the 9,477 people who identified themselves as supporters of the local pro-democracy camp, 96 percent said they opposed the national security law.

Meanwhile, 29 percent of respondents who identified themselves as non-supporters of the pro-democracy camp also said they opposed the security law, and 9 percent were neutral.

“We hope that it also solidifies a global alliance of defense for Hong Kong.

“If Beijing persists in strangling Hong Kong, the path we are on now leads to ‘lose-lose-lose’ for China, Hong Kong, the U.S., and the world,” HKDC stated.