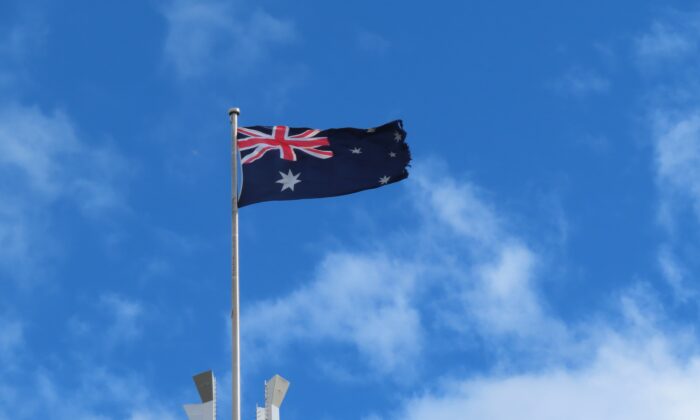 The Australian flag is seen on the Parliament House in Canberra, Australia, on April 1, 2022. (Rebecca Zhu/The Epoch Times)
Australia

Beijing Aggression Has Turned Australia Into Crucial Pillar of US Defense: Expert

The emergence of a more authoritarian and militarising Chinese Communist Party (CCP) has transformed Australia into a crucial component of U.S. defence plans to maintain its influence over the Pacific.

John Blaxland, professor of international security and intelligence studies at the Australian National University, told The Epoch Times that middle powers are stepping up as the United States wrestles with its position in the international community.

“Geo-strategically, and as a backup to the United States, Australia’s become more significant than ever for America’s plans and contingencies,” the former head of the Strategic and Defence Studies Centre said. “And that’s, I think, in part because of the rise of China. The emergence of a more authoritarian and powerful, increasingly militarised state that is much more prepared to throw its weight around than we had previously anticipated.”

As a counter to China’s increasingly belligerent behaviour, Blaxland noted that it wasn’t just Australia, but also Japan and South Korea that have stepped forward in the Asia-Pacific to help maintain the security environment.

“My sense is that the QUAD has become more and more important, particularly the role of Japan and Australia in contributing to helping the United States maintain its resolve and assuring the U.S. of being a welcome security partner in this part of the Indo-Pacific,” he said.

Likewise, China’s assertiveness has also driven a more focused multilateral response from Australia, according to Blaxland.

“When initially touted in 2007, the Quad was quite easily derailed by Chinese protestation. Australia gave priority to allaying their fears and showing due deference [under former Labor Prime Minister Kevin Rudd],” he said. “But the reinvigoration of the Quad in recent times would not have been possible without China’s assertiveness, particularly under President Xi. The member states now see their interests more closely aligned.”

Blaxland also noted that interoperability between the United States, Australia, Japan, and Korea has been increasing over the past 20 years, allowing Australia to be able to “plug and play” as part of a U.S.-led coalition in the region.

‘Cut Australia from the Herd’

Australia’s support for the United States has made it a target of the CCP however, firstly via soft power and more recently through economic coercion.

Blaxland believes that the latter was an attempt by Beijing to isolate Australia from the Anglosphere and its allies.

“I think there’s enough circumstantial evidence to mount a reasonably strong case that they are trying to and have been trying to for a number of years to wean us off United States security lines. To be honest, in the last few months, it’s backfired,” he said. “We’ve been a U.S. and UK ally for 100 plus years. So, if you’re able to break that bond, wouldn’t that be powerful? Yes, it will be very, very powerful.”

The comments from Blaxland follow those that Kurt Campbell, the Indo-Pacific coordinator under the Biden administration, said on July 2021 in an address to the Asia Society.

“I think from our perspective, it looks at least [on] some level that there is an attempt to cut Australia out of the herd, and to try to see if they can affect Australia to completely change how it both sees itself and sees the world,” Campbell said.

He noted that the relationship between Canberra and Washington has deepened as a result.

Blaxland says that Beijing has been surprised at how difficult it has been to sever Australia–U.S. ties.

“Xi has miscalculated on Australia because our sense of honour and our interests are now more divergent than ever. And I don’t think he appreciated how that would manifest and what the implications would be,” he said.

Australian Prime Minister Scott Morrison said in April that Australia is currently dealing with a very different China than in the past.