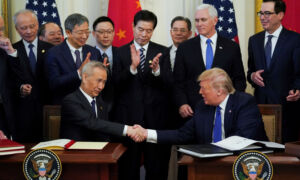 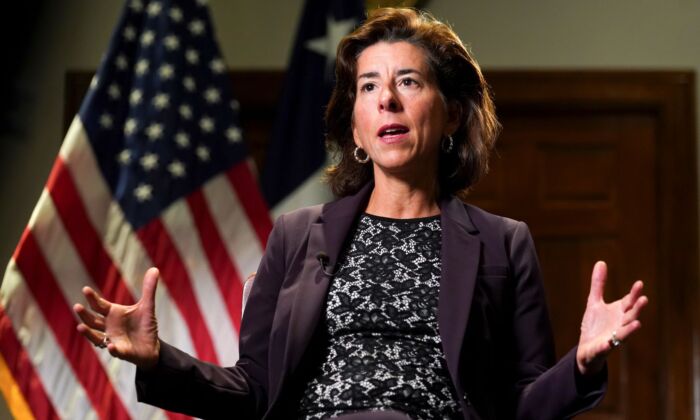 U.S. Commerce Secretary Gina Raimondo speaks during an interview at the Department of Commerce in Washington on Sept. 23, 2021. (Kevin Lamarque/Reuters)
US-China Relations

“There’s tens of billions of dollars of planes that Chinese airlines want to buy but the Chinese government is standing in the way,” she said in a question-and-answer session after a Sept. 28 speech in Washington.

Raimondo said Beijing is reneging on its phase one trade deal with the former U.S. administration in 2020. The deal, signed by the Chinese regime, aimed to vastly increase Chinese purchases of U.S. manufactured products.

In mid-January last year, China committed to buy an additional $200 billion of U.S. goods and services over the following two years from the corresponding 2017 pre-trade war baseline level, including aircraft, pharmaceuticals, and industrial machinery. The agreement went into effect on Feb. 14, 2020.

Yet Beijing’s reluctance to meet its commitments—despite the deal still in effect—brought about disappointment in Washington.

“The Chinese need to play by the rules. We need to hold their feet to the fire and hold them accountable,” Raimondo said in a separate interview with National Public Radio broadcast on Sept. 28.

However, trade data for the first quarter in 2020 showed Beijing had already fallen behind 2017 values.

On Sept. 23, Boeing Co. raised its forecast for China’s aircraft demand to 8,700 new airplanes for the next 20 years, worth $1.47 trillion based on list prices, the U.S. planemaker said in a statement.

The market was frustrated as the company was counting on China’s rebound from COVID-19 and future growth in its budget airline sector and e-commerce. Boeing shares fell 2.6 percent to $218.41 on Sept. 28.

Boeing and the Chinese embassy in Washington didn’t immediately respond to requests for comment.