Beidaihe: Not Just a River 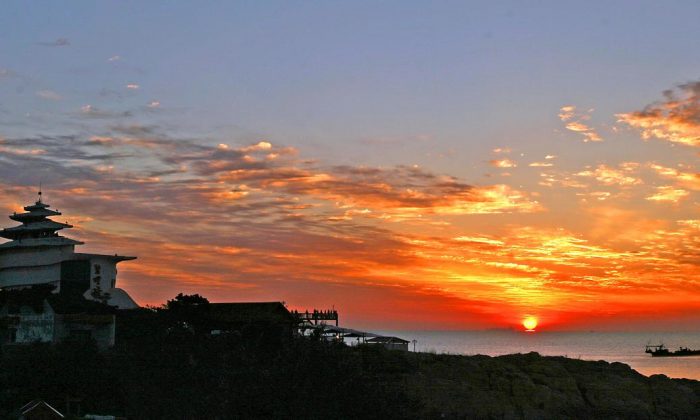 It is customary for top leaders of the Chinese Communist Party to go on vacation at the resort town of Beidaihe in the province of Hebei, near Beijing. This retreat typically lasts for about three weeks between late July and early August.

Because many major national policies and decisions have been finalized at Beidaihe in the past three decades, the so-called “Beidaihe conference” is closely monitored by foreign observers.

This year, observers have speculated that the top Party leadership will make some important decisions on a number of issues, including the power struggle between Party leader Xi Jinping and former Party leader Jiang Zemin, the restructuring of the Party, the country’s economic problems, and so on.

Insights into decisions made at Beidaihe must be made with an understanding of the local geography.

Beidaihe is a district in the city of Qinhuangdao in Hebei Province. A river called Daihe passes through Qinhuangdao on its way to the Bohai Sea. A beautiful beach sits on the northern bank of Daihe River.

In the 1950s, this scenic spot was designated a vacation resort for leaders of the Chinese regime. Later, it became known as the Beidaihe District.

Beidaihe wasn’t noteworthy during Mao Zedong’s time, but meetings there became significantly important in the reign of Deng Xiaoping. Because vacations at Beidaihe were informal, a paradoxical situation emerged—topics that weren’t suitable for a formal meeting could be broached over the course of card games, while having tea, or while swimming. These relaxed chats later became the foundation of critical policy decisions.

Vacations at Beidaihe are also an important time for the different Party factions to hold private negotiations and make secret compromises. The public may not see any decisions or documents from Beidaihe, but the outcome of the meeting will surface in the upcoming plenary session of the Communist Party.

Beidaihe wasn’t important during Mao Zedong’s reign because Mao held absolute power. He could, at any time, chat with anyone and issue top level directives. Mao didn’t really need an informal setting to haggle with top cadres.

During Deng Xiaoping’s era, however, the role of “collective leadership” became increasingly important. The various Party factions and interest groups needed a venue like Beidaihe to conduct informal negotiations, and make tacit agreements or compromises.

Jiang Zemin and Hu Jintao kept the Beidaihe tradition. Each year as summer approaches, the various Party factions would ready their material, survey the situation, and sift out political friends from foes. Each faction’s representatives then conduct their wheeling and dealing during the “relaxing” retreat at Beidaihe.

The Beidaihe tradition, however, has changed since Xi Jinping took office. For the past two summers, there have been calls for Xi and anti-corruption chief Wang Qishan to rein in the anti-corruption campaign on grounds that it has gone too far. But Xi and Wang would choose this same period to demonstrate their commitment to the anti-corruption effort by announcing their intention to arrest a “big tiger,” or a corrupt, high-ranking cadre.

At present, there’s hardly any political dissent from within the Party. But internal dissent has continued to surface in Chinese society, the country’s economy, and through international pressure.

This year, test solutions to the problems plaguing China’s economy and handling of foreign affairs will undoubtedly be brought up during private discussions at the Beidaihe conference.

Asking whether there was a conference at Beidaihe, or whether Beidaihe River is a river, is like asking whether Qinhuangdao (a port city in Hebei) is an island, and whether Zhongnanhai (the headquarters of the regime leadership) is a sea—politics in China is just this bizarre.

Zang Shan is an International affairs analyst specializing in US and China affairs.