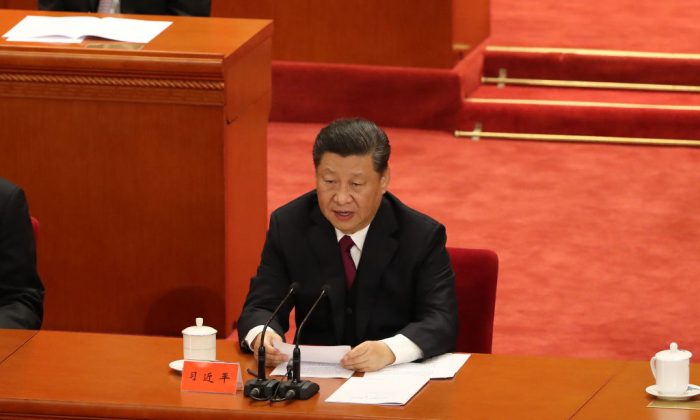 Chinese leader Xi Jinping delivers a speech at The Great Hall of The People in Beijing on April 30, 2019. (Andrea Verdelli/Getty Images)
Chinese Regime

Behind Xi Jinping Is A Divided Communist Party and Unengaged Officials

It’s hard to tell what worries Chinese Communist regime leader Xi Jinping the most—the U.S. trade war in front of him, a divided cabinet, or a whole country of corrupt, self-serving and unfaithful communist officials.

Divided at the Top

While the trade war has exposed China’s many vulnerabilities and scandals to the entire world, behind closed curtains Xi is struggling with what may end up being more devastating than any external challenge: his immediate inner circle is turning against him.

China observers have noticed a major shift in Xi’s strategy and personnel choices. After seven years of successful partnership with Vice President Wang Qishan who led anti-corruption campaigns that won Xi a lot of respect, and Premier Li Keqiang who focused on fixing the economy, Xi turned his favor upon strategist Wang Huning and Vice Premier Han Zheng. Both of his new confidantes served, and are likely still serving, Xi’s arch enemy—former regime leader Jiang Zemin.

Wang Huning is known for devising radical communist ideological campaigns, theories, and slogans for Xi and his predecessors. Han Zheng leads the now notorious One Belt, One Road (OBOR) initiative, and is a hardliner behind the recent Hong Kong and Macau unrest. Both were promoted by Jiang, and are said to be key members of Jiang’s “Shanghai Clique,” a group of national political leaders thought to hold allegiance towards Jiang, a political enemy of Xi.

While the two have Xi’s trust, their behaviors have called their loyalty into question. Han, for example, criticized the proposed trade accord with the United States during a meeting with two dozen Chinese top leaders on May 13, according to Wall Street Journal.

Wang Huning on the other hand, is allowing, if not ordering party media within his control to speak against Xi. In June, Xinhua.net published two articles that bashed those who choose to “surrender” to the United States in the trade war. The articles took an aggressive and menacing tone and were filled with radical and hateful vernacular commonly used during the 1970s Cultural Revolution. “Stop now,” one of the articles warned those who advocate for collaboration or hold a more moderate stance, “before you do anything that harms your family and pleases your enemies.”

People familiar with the matter believe the articles targeted Xi, Wang Qishan, and Li Keqiang—all of whom hope to work towards a resolution ending the trade war with the United States.

Inaction in the Middle

China has the world’s biggest body of government officials. Most of them are in the middle-tier who interpret, execute, and pass on top leadership’s policies.

This middle-tier has been a key obstacle against reform and problem-solving, said Xu Zhong, chief of the Chinese Central Bank Research Bureau, in February during a top economic forum. Most of the policy documents are drafted by the middle-tier officials from various functions, he said.

These officials hardly ever reached agreement due to understanding gaps and conflicting interests. This results in removal of controversial policies. “These controversial contents are the reforms that we truly need to solve important and challenging issues,” said Xu. Thus, Beijing’s policy changes are often stuck at the middle level due to the officials’ protection of their own interests, but done in the name of seeking cross-functional consensus. And problems, of course, remain unsolved.

Corruption at the Bottom

Corruption is a stubborn disease in any communist system. In China where the system has been running for almost 70 years, the extent and severity of corruption are jaw-dropping.

In the most recent anti-gang campaign, many local officials were found guilty of collaborating with gangs. Their titles ranged from head of local communist party branch, head of the Political and Legal Affairs Commission, and the chief of the Public Security Bureau.

Bribery in local elections is also a common practice, which means a large number of local officials acquired their positions illegally. Worse still, a recent survey by the Chinese Academy of Social Sciences showed over 45 percent of village committee members were former gang leaders.

It’s no wonder that these local officials focus strongly on getting their investment back with their administrative powers. They may be too busy to take seriously the excessive inspection and evaluation teams sent by the central government. As soon as the teams land in a province or township, the inspection turns into a game of bureaucracy and formality.

What’s behind all the troubles is the fact that the communist party itself is what truly hinders development and improvement, and what demotivates officials to do their duty. With more direct interaction with the people, the local officials know better than the top leaders how fragile the party is. Today’s officials are unwilling to work hard for the party, and they are planning out their retreat once the party is in crisis.

Xi may be aware of the situation. In a February meeting, Xi warned the party is facing dangers from many directions, and that the country needs to be prepared for major hardships ahead.

But the junior officials looked on indifferently, as if they are not part of the system.

Economist Cheng Xiaonong believes such behaviors of the local officials pose a major political threat for Beijing, because the measures to save the economy will not get implemented.

“More importantly,” Cheng said, “such bureaucratic behaviors marks the loss of loyalty on the officials’ part.”