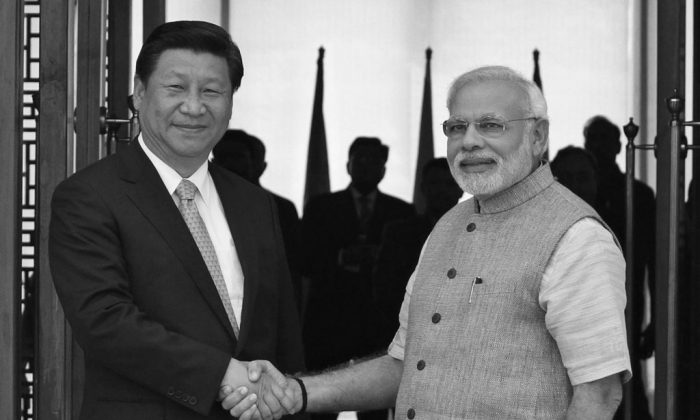 Behind the Scenes of Xi Jinping’s Visit to India

NEW DELHI—The much-hyped visit of Chinese leader Xi Jinping to India last week did not yield what India had hoped for. Instead, it brought a much smaller investment than was projected, and greater confrontation on the India-China border.

During Xi’s visit, the two countries signed 12 bilateral agreements that included setting up two industrial parks and a promise of a $20 billion investment from China spread out over 5 years.

“Possibly the Chinese leadership wriggled out of this,” said Srikanth Kondapalli, Professor in Chinese Studies at the Center for East Asian Studies in Jawaharlal Nehru University in New Delhi.

According to Kondapalli, China has been known to extract political concessions for its investments abroad, and Indian Prime Minister, Narendra Modi, might have refused to give the kind of assurances Xi wanted to make more investments.

Kondapalli said it could also be because of the different aspirations the two have on investment from China. It is known that Modi wants to generate employment for Indians. Chinese companies generally bring in Chinese labor wherever they invest, so this might have been a roadblock to inking more deals.

While Xi was in New Delhi, more than 800 miles away on India’s northwestern border, 1,000 Chinese soldiers were locked in a face-to-face confrontation with 1,500 Indian soldiers. The situation eased a bit after Modi took up the issue with Xi on the second day of his visit, and Xi asked the soldiers to withdraw.

However, a few hours after most had withdrawn, 35 Chinese soldiers again intruded past the Line of Control, the de facto border, and were later joined by 50 more at a nearby location. The standoff continued, and the Indian soldiers that had started to leave, again pitched their tents, expecting fresh confrontation.


According to Kondapalli the timing of the confrontation could be linked to the anti-corruption campaign Xi has initiated in China that has targeted some of the top cadres of the Communist Party.

“The rank and file appeared to be disturbed with the campaign that Xi Jinping is initiating in the PLA. Some suggest that they were taking their ire against Xi Jingping,” he said.

On Monday Chinese media reported Xi saying at a meeting with PLA chiefs of staff, “All PLA forces should follow the instructions of President Xi.”

It quoted Xi, who is the chairman of the Central Military Commission, as saying all decisions from the central leadership need be implemented to “guarantee a smooth chain of command,” possibly addressing the conflicting loyalties in the PLA.

Chinese media also quoted Xi as saying, “Headquarters of all PLA forces should improve their combat readiness and sharpen their ability to win a regional war in the age of information technology.”

This directive from Xi after his visit to India has led many to speculate as to what China’s true intentions on the border are.

According to William Nunes, an assistant professor of Political Science at Gujarat National Law University, the confrontation could be China’s response to Modi’s provocative anti-China election speeches, and his more recent aggressive foreign policy.

Before becoming the Prime Minister of India, Modi said China “should shed its expansionist policy” in a campaign speech in the state of Arunachal Pradesh. China claims Arunachal Pradesh is a part of Tibet, and refuses to recognize it as Indian territory.

“China will continue to increase its influence in the region to reduce India’s status of a sub-regional power,” Nunes predicted. “The politico-strategic relation will continue to be marked by suspicion and distrust.”

He added that trade between the two nations would likely continue as normal, just as China has done with other neighbors it is in territorial conflicts with.