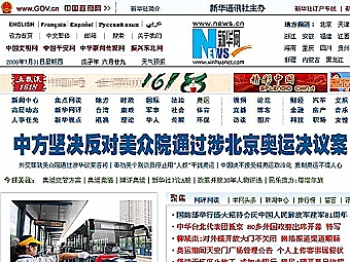 The article on Xinhua.net
Opinion

Behind the Pre-Olympic Sino-U.S. Tension

Shi Yu
biggersmaller
Print
It is widely known that in order to secure Beijing’s Olympic bid seven years ago, the Chinese Communist Party (CCP) promised to improve its human rights record and increase freedoms for the Chinese people. In the last seven years, many human rights watchdogs, including Amnesty International, have recognized that the CCP’s human rights abuses have gotten worse, not better. What’s more, they have even accused the regime of using the Olympics as a pretext to crackdown on human rights lawyers, democracy activists, and religious groups within China.

On July 30, the U.S. House of Representatives overwhelmingly passed a resolution calling on the CCP to stop its human rights violations immediately and to fulfill its promise to grant media freedom during the Games. The resolution said that only this would ensure the Beijing Olympics would be held under the sprit of freedom and openness.

The next day, the website of the CCP’s mouthpiece, Xinhua News Agency, published a front page article that claimed China was "strongly offended" and "firmly objects to the resolution.” This article repeatedly said that the resolution was the work of only a “very limited few anti-China” representatives in the House. The resolution, however, was nearly unanimously passed with a vote of 419 to 1.

A series of other articles followed, on the same day, that accused the U.S. Congress of “interfering with," "politicizing," and “resisting” the Beijing Olympic games.

Such a strong response from the CCP’s propaganda machine came on the heels of a series of recent actions, undertaken within the U.S. government, that have drawn focus towards the Chinese regimes human rights abuses and its lack of press freedom. In particular, during the past week, President Bush met with a group of Chinese dissidents, and a U.S. senator revealed the CCP is heavily monitoring Internet activities in Beijing hotels.

This has irritated the CCP, which has been heavily banking on a propaganda bonanza from the Olympic games. Its strong reaction against the U.S. Congressional Resolution is reminiscent of past campaigns of stirring up anti-U.S. sentiments among the Chinese citizenry – a tactic they have used in the past to strengthen their support and cover up an ever-deteriorating human rights situation at home.

Zhang Jielian, an expert on Chinese politics, pointed out that President Bush's meeting with Chinese dissidents and the House's passing of the resolution were barely covered in U.S. mainstream media, however, they were responded to loudly by the CCP's propaganda machine. He said this shows that the CCP is manipulating public opinion on the Olympics, taking the opportunity to provoke anti-U.S. sentiments, and trying to divert negative sentiments towards the CCP at the US.

Zhang said the CCP has been using the Olympics to suite their political needs—from the original bid right up to the hosting the games this summer. “The CCP’s accusing the U.S. of politicizing the games is like a thief yelling ‘stop thief,’” he said.