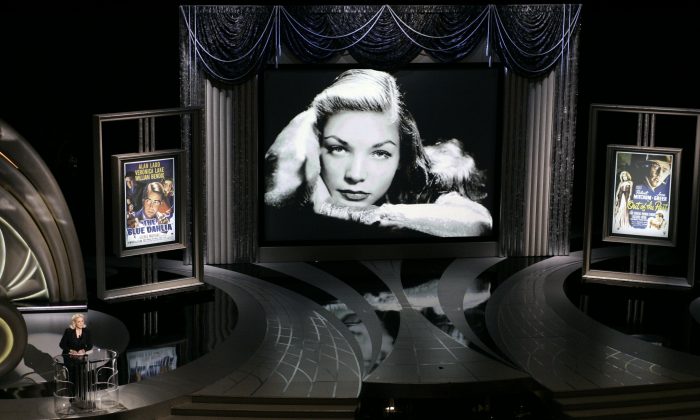 Actress Lauren Bacall at the 78th Academy Awards in Hollywood on March 5, 2006. (TIMOTHY A. CLARY/AFP/GettyImages)
Beauty

Behind the Look and the Style of Lauren Bacall

It was this month, 72 years ago that Harper’s Bazaar launched the iconic face of Betty Joan Perske, who came to be known as Lauren Bacall, when she appeared on the magazine’s 1943 cover.

The photo, taken by Louise Dahl-Wolfe and chosen by Harper’s Bazaar editor Diana Vreeland, is also the image that opens the exhibition called “Lauren Bacall: The Look” presented by The Fashion Institute of Technology’s (FIT) School of Graduate Studies and The Museum at FIT.

The photograph shows Bacall as a fashion model at age 19 staring wistfully past the gaze of the reader next to the sign of the Red Cross in a black two-piece suit and white shirt, holding a bag that is as red as the red cross.

I used to tremble from nerves so badly that the only way I could hold my head steady was to lower my chin practically to my chest and look up at Bogie. That was the beginning of The Look.
— Lauren Bacall

When the wife of film director Howard Hawks saw the cover she urged her husband to have Bacall sit for a screen test. As a result, Betty from the Bronx was straight-away cast in a starring role opposite Humphrey Bogart in the 1944 movie “To Have and Have Not.”

But exhibition co-curator Mindy Meissen explains that had Hawks not cast Bacall, she would have still had a shot at stardom because two other directors, David O. Selznick and Howard Hughes, had also asked for her details as a result the Harper’s Bazaar cover.

The Nerves Behind ‘The Look’

Born in New York City, the only daughter of Jewish immigrants, William Perske and Natalie Weinstein-Bacal, Betty (as her friends and family called her) dreamed of being an actress. But big dreams don’t necessarily mean steady nerves.

Bacall is quoted as saying: “I used to tremble from nerves so badly that the only way I could hold my head steady was to lower my chin practically to my chest and look up at Bogie. That was the beginning of The Look.”

Her nerves steadied only temporarily (apparently Humphrey Bogart kept making corny jokes to make her feel at ease) until she fell in love with him on the set of “To Have and Have Not,” and then she had palpitations of a different kind. They married in the spring of 1945.

A Muse in Paris

The FIT exhibition shows the test sheets to see which hairstyle would suit Bacall best. The winner was of course, the one with the deep side-part and soft waves that she’s famous for.

Out of 700 garments that Bacall donated to the museum between 1968 and 1986, about one dozen were selected for the exhibition to highlight her personality on and off screen. Looking at all the images and fashion worn by the star, it is clear that she had a very uncluttered, classic style that didn’t change much through the decades.

Although she’s most known for her sultry looks and her deep voice, in a short film called “Bacall and the Boys,” included with the exhibition, we see her as a lighthearted fashion muse.

“The Boys” in the 1968 CBS special were fashion designers Marc Bohan, Pierre Cardin, Yves Saint Laurent, and Emanuel Ungaro. And right next to the screen in the installation are her ensembles from the actual television show.

There’s the intriguing hot-pink Cardin mini-dress with molded 3-D pyramid shapes that we see Cardin fitting on Bacall. The dress, which Bacall whips out of a plastic bag, was touted as being made from an “unburnable” and uncrushable material, and cost $20.

There is also the elegant silk jersey Dior gown with ostrich plumes at the wrists and hem designed by Marc Bohan, the designer for the fashion house of Dior at the time. Next to it are two creations by Yves Saint Laurent, one of which is an intriguing evening set with sequins, that if one looks carefully enough, reveals a pair of equally beaded shorts. Hard to believe that Bacall actually wore this.

But even before she became an actress, Bacall was a client of Norman Norell. He became one of her long-time favorite designers. One of his dazzling creations for Bacall meekly named “subway coat” is an ensemble of a tan overcoat that opens to reveal a lining emblazoned with gold sequins and a matching sequin sheath dress. Apparently it took more than 200 hours of handwork to create the pavé sequined look which also retains a certain classic simplicity.

Of all the fashions that Bacall wore throughout her life and on-screen career, this Norell creation seems to embody almost everything that was Bacall herself: restrained, classic, quiet, and then pow!—an explosion of light and color that continues to linger like the molten lava from a volcano that can take you by surprise again.

Alas, there aren’t many, or any like her. The exhibition is a great little glimpse into a world that is slowly fading.