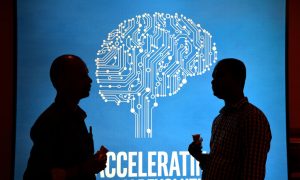 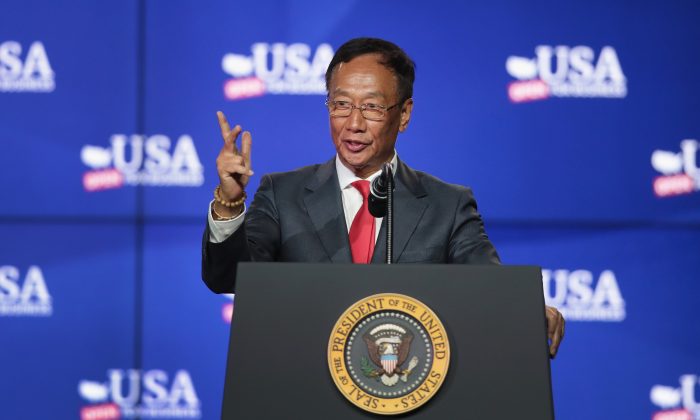 Behind the Changes of Foxconn’s Wisconsin Investment

Critics underestimating impact of AI on manufacturing jobs
By He Qinglian

Taiwanese billionaire and Foxconn Technology Group Chairman Terry Gou recently changed his investment plan in the state of Wisconsin. His original plan was to set up a factory of liquid crystal display (LCD) panels in Wisconsin, but now he has decided to turn it into an R&D site for the development of high-tech products with medical or industrial applications.

So instead of providing 13,000 manufacturing jobs as he promised before, the R&D site will mostly hire engineers and researchers. Some media observers who are at odds with President Donald Trump have rejoiced, as they hope to see Trump’s plan to revitalize the American manufacturing sector end up being a failure. They immediately started to envision that this would become a key factor resulting in Trump’s failure in the 2020 presidential election.

They completely ignored the complicated factors behind Gou’s decision to change his investment plan.

This kind of media analysis is a revelation of the commentator’s own desires and ignorance.

Even the worst consequence won’t constitute a heavy blow to President Trump’s 2020 campaign. It’s just that his job revival plan won’t be as optimal as what American blue-collar workers had originally hoped for.

I personally believe the United States really should consider how to make adjustment according to Terry Gou’s revised investment plan. In late January, Foxconn issued a statement saying that the global market environment “has changed,” which “has necessitated the adjustment of plans for all projects, including Wisconsin.”

The statement also revealed more details about the new business plan, for example, the Wisconsin campus will include facilities for back-end packaging of LCD modules, molding, and tool and die processes involved in the production of high-precision housing, and final assembly for end products, etc.

But it’s possible for Foxconn to make big adjustments to this new plan in the future, because the trend to make greater use of AI to replace human workforce is inevitable.

In January 2019, Washington-based Brookings Institution published a research report titled “Automation and Artificial Intelligence: How machines are affecting people and places.” Based on a survey of 36 million current job positions in the United States, the report pointed out a quarter of U.S. jobs would be replaced by artificial intelligence in the future. These high-risk jobs are those in office administration, production, transportation, and food preparation.

The workers in these vulnerable positions would have to improve their skills or learn new skills to mitigate the risk of losing their jobs.  For some jobs, the unemployment risk may come in the next several years, while for others, it may take 20 years.

In terms of geographic impact, the U.S. Midwest will be one of the hardest-hit regions, with Indiana and Kentucky bearing the highest risk, where half of the population works in the manufacturing and transportation industries. In addition, Wisconsin, Ohio, and Iowa will also face tremendous unemployment pressure. Similarly, metropolitans in the northeast, such as Washington,  Philadelphia, New York, and Boston, will also have to be prepared for large-scale AI replacement of human workers in manufacturing industry.

“Men, youth, and less educated workers, along with underrepresented groups all appear likely to face significantly more acute challenges from automation in the coming years. Young workers and Hispanics will be especially exposed,” the Brooking report said.

It so happened that Terry Gou chose to open his new factory in Wisconsin. The 13,000 manufacturing jobs he promised two years ago are indeed important to that state. That is why Wisconsin eagerly invited Foxconn. The Wisconsin state government has invested heavily in this project, paying $200,000 (a critic claims it was  $1.5 million) for each job opportunity. However, capital investment in a certain place is not a charity; it is to make profit. After reevaluating the situation, Gou changed his mind, which is a manifestation of his shrewdness. It is precisely because of this kind of shrewdness that he has always been a winner in the business battleground.

President Trump made many promises during his presidential campaign,  including pledging to revitalize the Rust Belt, the traditional industrial area in the Great Lakes region and the Midwest. However, whatever human minds intend, it’s the heavens that decides the end. The challenge of AI makes it impossible to restore the prosperity of traditional American manufacturing. President Trump should know that well.

Study Gou’s Investment Model Before Inviting Him to Do Business

Terry Gou failed to honor his commitment to Wisconsin. Mainstream media took this opportunity to gloat over President Trump. In addition to their deliberate neglect of the AI revolution, they also showed a lack of  basic understanding of Gou’s investment model.

The Southern Chinese city of Shenzhen was one of the first economic development zones in China and the birthplace of Gou’s wealth. His investment model in Shenzhen has become a tried-and-true model for his business success around the globe.

This model has its own characteristics. In addition to forcing employees to work overtime and reduce trade unions to an empty shell, Gou paid special attention to nurture relationships with local governments. He tried to get government support so that government officials turn a blind eye to potential labor rights issues of his company. And that was just a small fraction of the story between Gou and the Shenzhen government.

It was not until numerous Foxconn’s employees committed suicide that Chinese media found out, through interviews with Shenzhen officials, that local authorities had a lot of complaints regarding Foxconn. As a 400,000-employee plant, Foxconn’s tax revenue contributions were far less than that of Huawei, a 40,000-employee company. According to public information from Shenzhen’s tax department, Foxconn paid 597 million yuan ($87 million) in 2009, accounting for only 0.7 percent of Shenzhen’s total tax revenue of 82.8 billion yuan, while Huawei’s tax contribution in the same year was 2.27 billion yuan, or almost four times’ worth.

This is because Terry Gou is good at tax avoidance. In addition to using various tax deductions from the import of raw materials to the export of products, Gou’s company made use of China’s tax incentives for foreign investment, to an extreme. For example, for foreign-invested companies in China, income tax is exempted for the first three years, and halved in the following five years. Gou registered a number of new enterprises every now and then to take advantage of this incentive, so that Foxconn can continue to enjoy various tax benefits.

Foxconn opened its first factory in Shenzhen in 1988. According to the statistics of  Shenzhen’s tax department, as of 2009 Foxconn had a total of 22 subsidiary enterprises, each as an independent legal entity, of which 11 companies were enjoying the “tax exemption policy.”

In 2007, these companies declared a total export tax rebate of 1 billion yuan, offsets and refunds totaling 3 billion yuan, and only paid 100 million yuan of value-added tax. That’s a relatively tiny amount of taxes for a company of its size. Local authorities had been gnashing their teeth to no avail, because local GDP and export earnings are two important parameters to evaluate Chinese officials’ performance.

After the numerous suicide incidents at Foxconn, Shenzhen government no longer wished to keep Foxconn within its jurisdiction, and allowed it to move to wherever it wanted to.

As for President Trump and the several state governments looking to Foxconn’s investment, it is not surprising that they were too quick to trust Terry Gou. They were simply too anxious in their desire to revive the economy.

Impact on the 2020 U.S. Presidential Election

The change in Terry Gou’s investment project in the U.S. actually epitomized the universal predicament facing the Western countries. This predicament has finally been acknowledged in the Global Risk Report 2019 recently released by the World Economic Forum. This report admitted that the globalization has caused growing job insecurity and stability, as well as increasing socioeconomic gap between the rich and poor in the U.S. and European countries.

The U.S. Democratic Party, a main advocate of globalization, has never concerned itself with production and generation of income. That is, it only cares about how to divide the pie, instead of how to make the pie bigger. So far, there are more than ten Democratic candidates for the 2020 presidential election. They have used their identities to full advantage in recent activities; for example, being an Indian American, a Hispanic mixed-race, African American, LGBT or pro-LGBT, as well as their political preference such as encouraging illegal immigration and healthcare-for-all.

Even traditional Democratic voters feel frustrated with these candidates, as many voters don’t think they are quality prospects.

When many developed countries are struggling to cope with various domestic conflicts, the challenge of AI has quietly arrived. For example in France, in order to keep jobs from AI, president Emmanuel Macron proposed to collect taxes on robots.

Attracting foreign investment to increase jobs is not something the Democratic Party is competent in. When Foxconn changed its investment plan, other than gloating over President Trump, the Democratic Party could not come up with any helpful suggestions. In all likelihood, Foxconn’s plant project in Wisconsin should not be a determining factor for the 2020 Presidential Election.