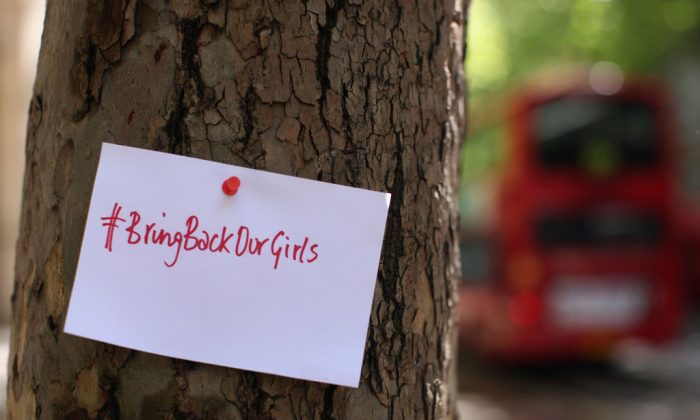 A sign that reads 'Bring back our girls' is pinned to a tree as protesters calling for the release of a group of abducted Nigerian schoolgirls gather outside Nigeria House on May 9, 2014 in London, England. 276 schoolgirls were abducted from their boarding school on 14 April, 2014 in the town of Chibok in north-eastern Borno state in Nigeria. The abductions have sparked protests around the world calling for the release of the girls who are being held by the militant group Boko Haram. (Dan Kitwood/Getty Images)
Opinion

Behind the Boko Haram Headlines, Slavery in Africa is the Real Crisis

The mass kidnapping of schoolgirls by terrorist group Boko Haram in Nigeria is neither a new nor rare occurrence, though this does not make it any less shocking. Boko Haram has been active in Nigeria for five years and is just the tip of the iceberg when it comes to Africa’s slavery crisis.

In Nigeria, there are “tens of thousands of people bought and sold every year”, according to Africa expert Benjamin Lawrance. The majority are children: in 2003, the International Labour Organisation estimated that as many as six million Nigerian children had been trafficked at some time in their lives.

In Africa as a whole, the scale of the problem is vast and far beyond the resources currently allocated to fight it, let alone sufficient to help victims. Lobby group and NGO Free the Slaves estimates that US$1.6 billion profit (an amount larger than the GDP of eight African countries last year) derives from African and Middle Eastern slavery annually.

A look at some of the countries involved gives more of an idea of the scope of the issue and how its evil tentacles reach Australian consumer goods. Around 40% of the world’s chocolate comes from cocoa produced in the Ivory Coast. Children from across West Africa are trafficked to work there: there is no guarantee that those children have not grown the chocolate you enjoy.

In the Eastern Congo, seven types of slavery are prevalent. Men and boys are enslaved in the mines of the region, whose products we all have in our mobile phones and other electronics. A covert investigation in 2013 by Free the Slaves found that more than 90% of mineworkers were enslaved, the majority through debt bondage or having been kidnapped by armed groups.

Nearby, they found women and girls who had been trafficked to work as prostitutes to serve the miners.

In Ghana, people are enslaved in the gold mining and fishing industries, with children being particularly prized by the latter. Seven hundred have been rescued in the last decade from just one fishing location.

In 2008, the Sudanese parliament announced that at least 35,000 people – down from the 200,000 once held – remained enslaved there, principally Christians from the South held by Islamic families in the North. Unfortunately, as South Sudan disintegrates into violence, there are reports of both sides kidnapping children for use as soldiers. This practice has become endemic across the continent each time conflict ensues.

The tragic truth is that children are part of warlords’ armoury today because they are cheap to feed, easy to kidnap and often fearless. In my own work, I have asked Sierra Leoneans about their community’s oral histories about 19th-century slavery, only instead to hear an outpouring of harrowing detail about their own enslavement in the 1990s civil war.

Yet even this is only a part of the problem of enslaved Africans today, since most are trafficked abroad to places where they fetch far higher prices. African domestic workers, often children, can be found across the Middle East, Europe and the US. There is a “Nigerian” lane in Amsterdam’s red light district. African prostitutes can be found across Europe and Asia where they are sold as niche items.

Herein lies a large part of the problem with western strategies for dealing with this issue. Trafficking is by its nature a grey area; a vast, unknown percentage of those trafficked into the western world did so not after kidnap but having been tricked. In their utter desperation – many are from refugee camps, today’s favourite place for slave hunters – they fell for traffickers’ lies.

So it is that the western world sees trafficking in Africa in terms of something to be halted to slow the inflow of immigrants, not to help prevent potential victims per se. The demand to protect our borders, not the centuries of slave trading, is the context for anti-trafficking policies.

Tragically, it often seems that Africans are as regularly portrayed today as “other” – perhaps deemed worthy of our pity but rarely our solidarity – as they did at the height of the transatlantic slave trade.

Until we change that, and focus less on political expediency and more on the suffering and courage of girls like Deborah Sanya who escaped Boko Haram and told her story, justice for the millions who are still bought and sold seems a remote hope.

Emma Christopher receives funding from the ARC. She is affiliated with a number of anti-slavery groups, including Free the Slaves. This article was originally published on The Conversation. Read the original article.